We flew in this morning from Barcelona – thankfully it’ll be our last flight until Vilnius in two weeks. It was also a much better experience than the Milan airport – we had plenty of time to go through security and get to our gate.
When we got to Milan I was a little disappointed when I found out that we weren’t actually staying in Milan. My room overlooked a highway and the weather outside was dull and gray. Oh well, that just meant that I had to buy internet and compute during the day off. Eric and I also really needed to do laundry, so we made that our first priority. We walked under the bridge (which supported the highway) and about ten minutes later, we found a coin op joint. Being that we’re inept and totally idiotic, Eric and I struggled to figure out how to use the machines. The old owner tried to show us by pointing us around the white and yellow checkered room, detailing steps in mumbled Italian. It took him three times just to describe putting the clothes in. The soap was a whole other story. Finally after fifteen minutes, our clothes were cycling in suds. We decided that we trusted this guy enough to walk around a little bit. Of course we were starving, so we figured we’d grab a bite to eat. We immediately noticed a pizza place two doors down. Hm… pizza in Italy? Yes, please. We walked in pointed to the Foccaccia Primavera, a slice of thick crusted pizza topped with tomato sauce, olives, capers, mushrooms and peppers. The crust was perfectly airy and crisp – not dense like some Sicilian style pies. The sauce was perfectly balanced in terms of sweet, salty, and acidity. It was so good, we went back the next day got it again, this time with a slice of Pizza Bianca, a sauceless, mozzarella-ey slice topped with diced tomato and just the right amount of rosemary. 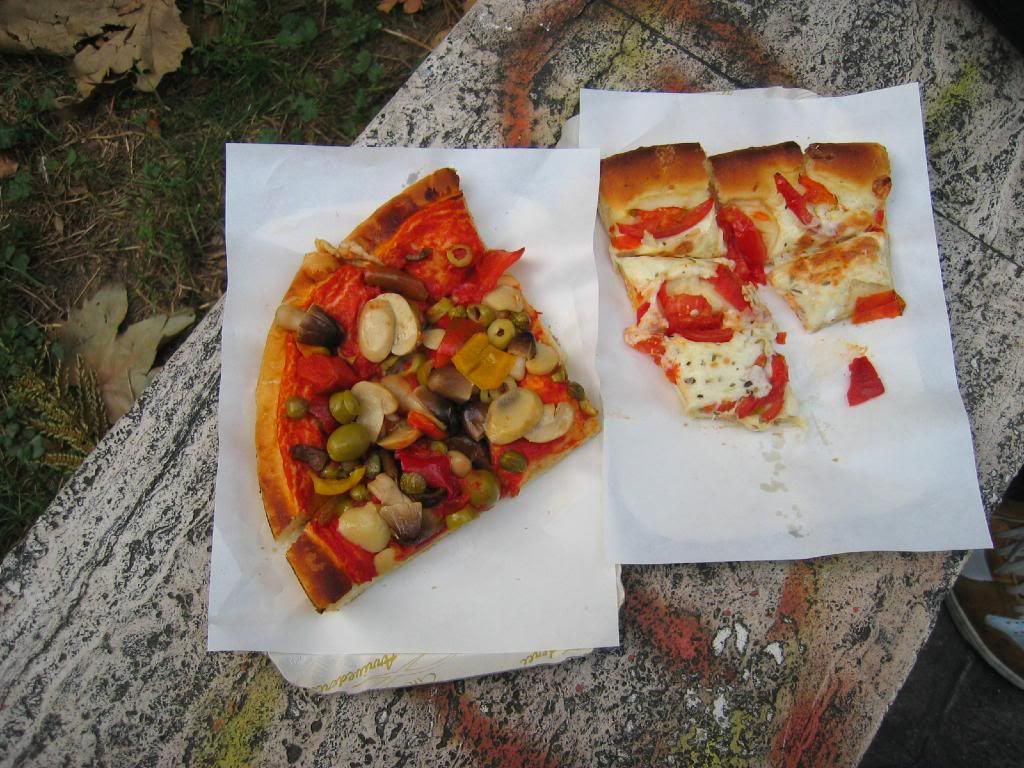 Resisting the urges to get Gelato (next door), we paced back to the Laundromat to put our clothes in the dryer. The man was leaving, so we made it just in time. An older woman came in with a little dog that ran over to me. Thinking about how much I missed my Monty, I petted the pup. He pulled back a little, sniffing my pizza-scented fingers. He started to bark, as if he were angry with me for not having brought him back any. “I’m sorry. I didn’t know you were coming.” I giggled. We sat in the ‘mat until the clothes were dry and trekked back to the hotel.
A couple hours later and we met up with Adrian for dinner. Since we weren't in downtown Milan, I had no good way of searching for a nice spot to eat. Again we were left to the mercy of our hotel. They quickly handed us a card for Ristorante Morganti Enoteca. Sounded good - we made a reservation at once.
The taxi dropped us off in front of the restaurant, and we stood outside observing the menu. Meeting all of our standards (veg options, cheap, etc), we decided to go for it… but where’s the door? It looked empty inside, but the man at our hotel’s reception had called ahead and made a reservation… were they playing some sort of sick joke on us?
We walked around the block… that wasn’t right either. Finally we realized that the door blocked by a table was indeed the entrance. Wow, the place was completely empty – does no one in Europe eat before 10? 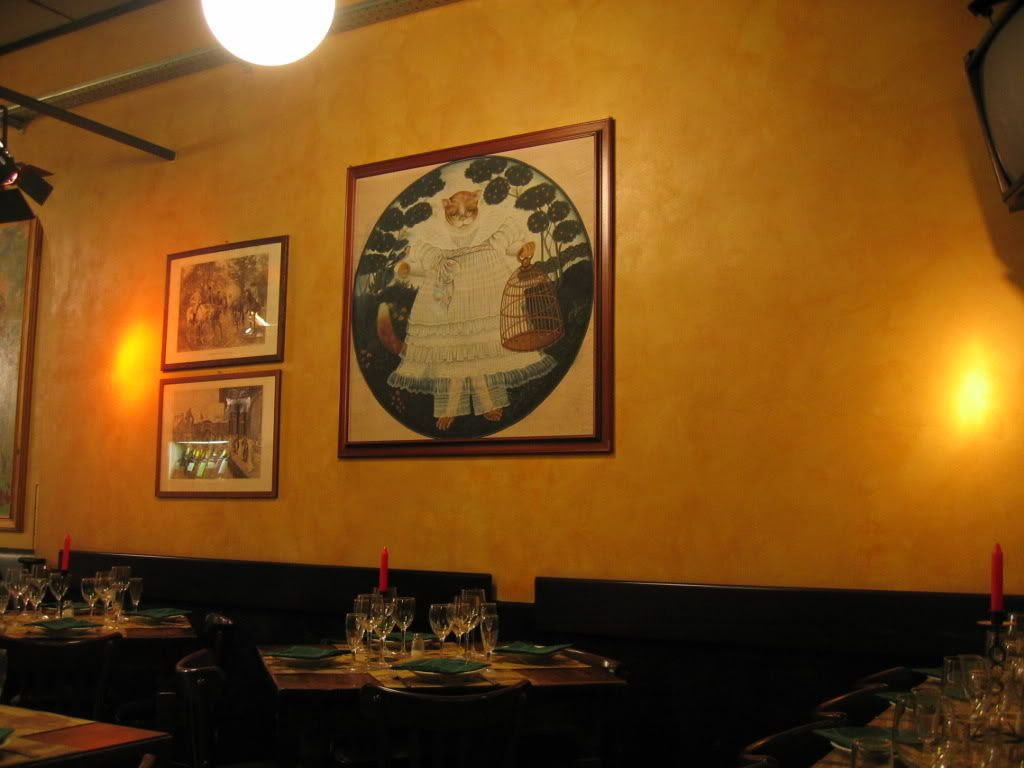 Finally we were greeted by an old man who looked like Geppetto. His mustache curled upwards in the most whimsical way. He lit our candle, poured us a complimentary Apertivo and took our drink order. Adrian and Eric split a half liter of house white; I got my own of red. He returned with the two pitchers and a plate of bruschetta. 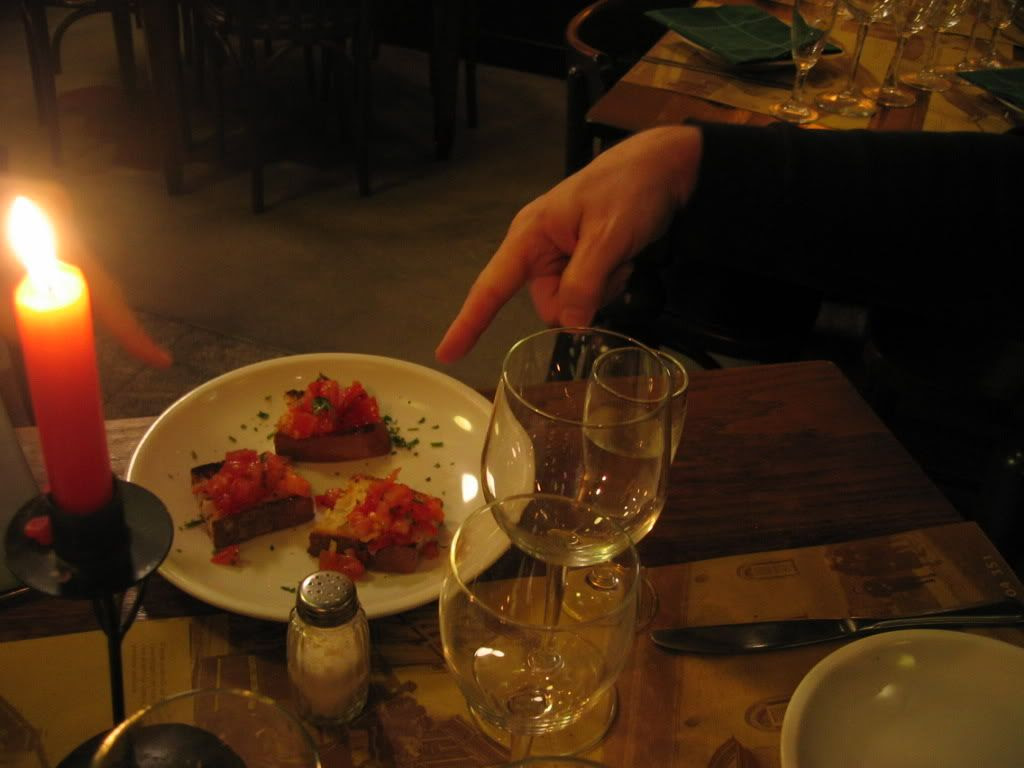 Free stuff is good. I like free stuff – especially when it’s food – especially when I’m starving. “What do you like to eat?” he asked. “Everything,” we replied in unison. “You like fish?” I nodded – but I just wanted to get the order in before I got too drunk to talk from having alcohol on an empty stomach.
Eric and Adrian started with spinach and ricotta stuffed tortellini, which was topped with a fresh tomato sauce and a couple whole basil leaves. I could tell that the garlic and diced tomato was just briefly sautéed and that the pasta was most likely made in house, as it was soft (not in an overcooked way) and egg-y. 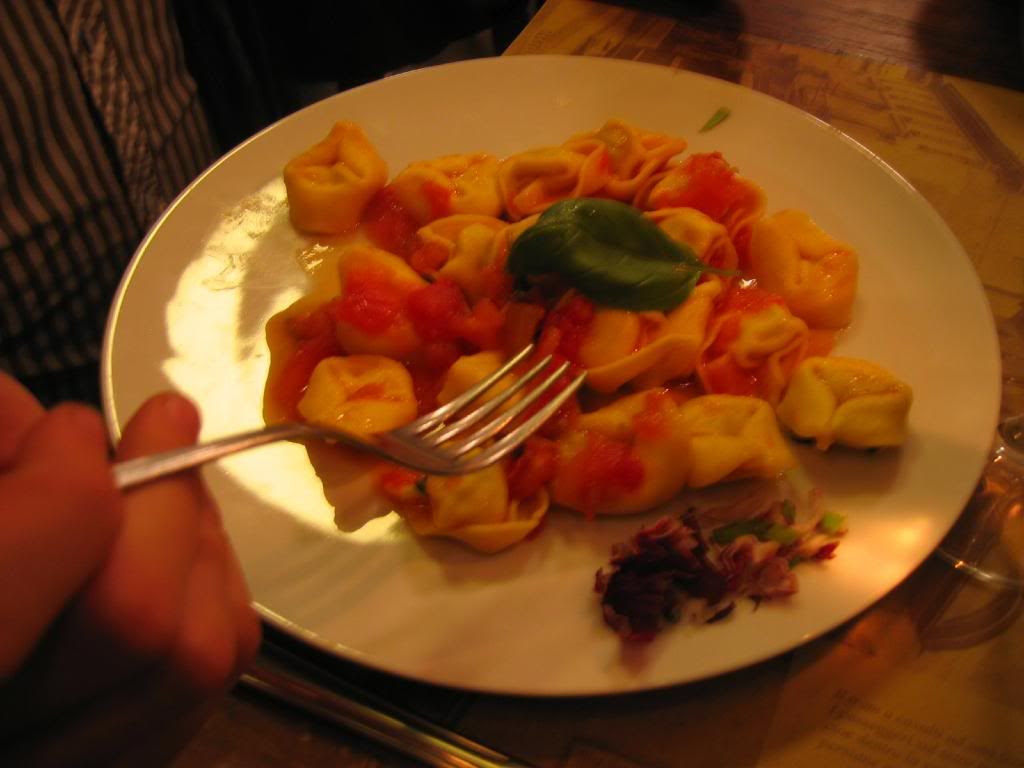 I got a nice big salad which came undressed, which I love since I can make the dressing as tart and vinegary as I want. 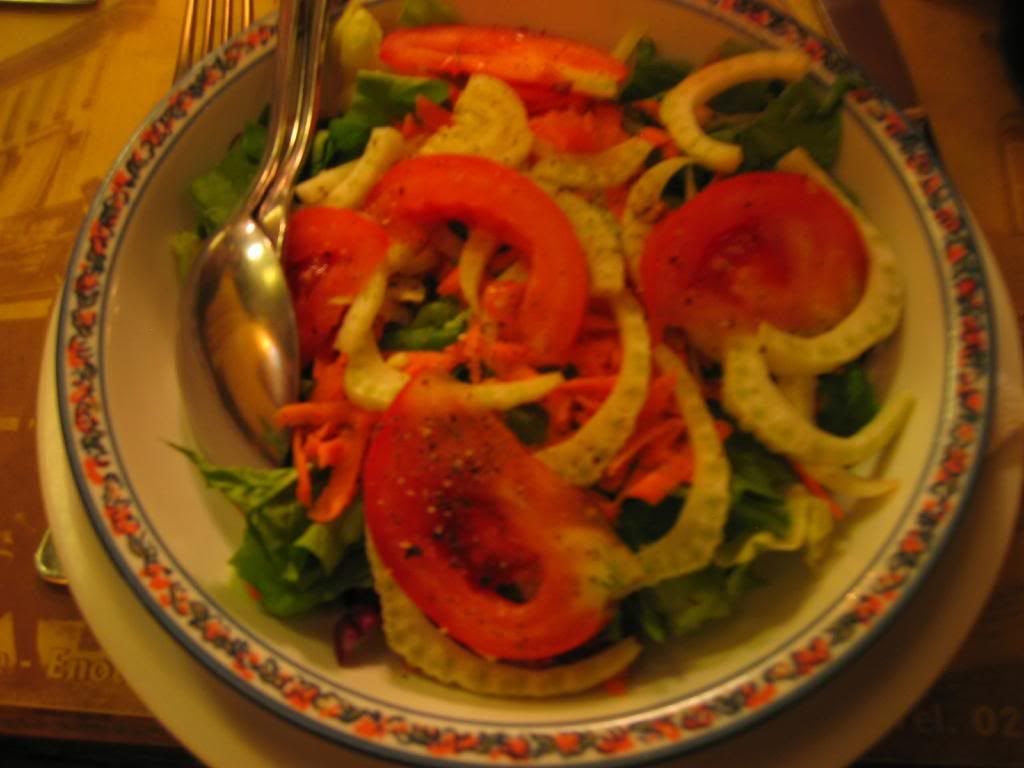 As we were enjoying our first course, another group of three sat down across the room. One was definitely Italian (a good sign) but the other two were English and American. Well, I thought, maybe this is a guy that knows his food and is taking his visiting friends to his favorite restaurant. I could overhear our waiter talking to them, “You like fish?” Apparently he was really trying to sell the seafood tonight – I got worried because I ordered bass. Just then our second courses arrived. Eric got a plate of grilled vegetables that were topped with cheese and broiled. How could that be bad? 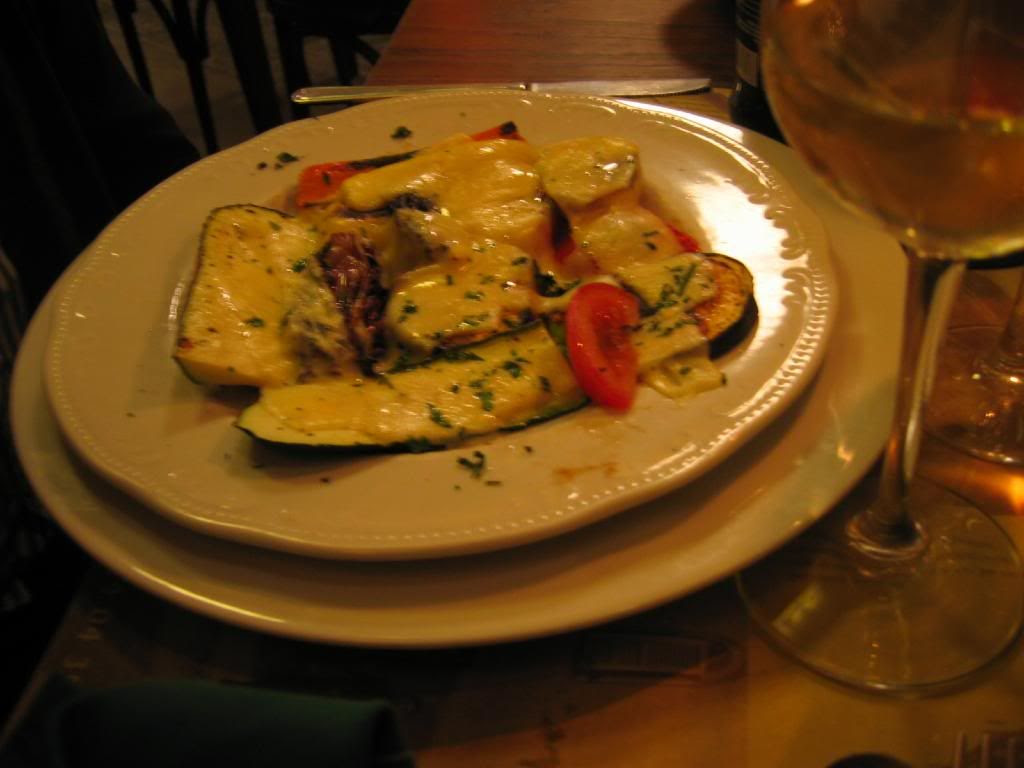 Adrian got Veal Scallopini – which looked like a nice rendering of a classic, covered in arugula and tomatoes. 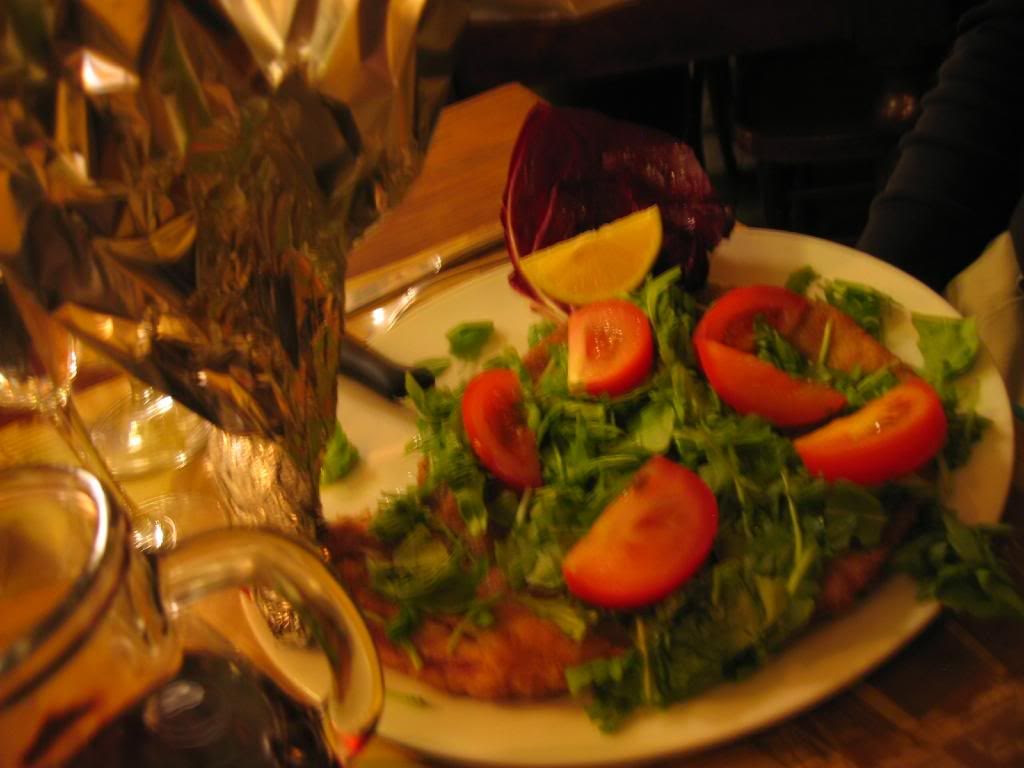 As aforementioned, I got the bass (luckily fillet-ed and de-boned), which was wrapped in thinly sliced potato and pan seared. It was really excellent – the potato crisped up really nicely and the delicately sweet fish stayed nice and moist. It’s a common technique that I think I’ll try out back home (“Ooh ooh! Make it for me Julie” - I know you’re salivating, Mom). 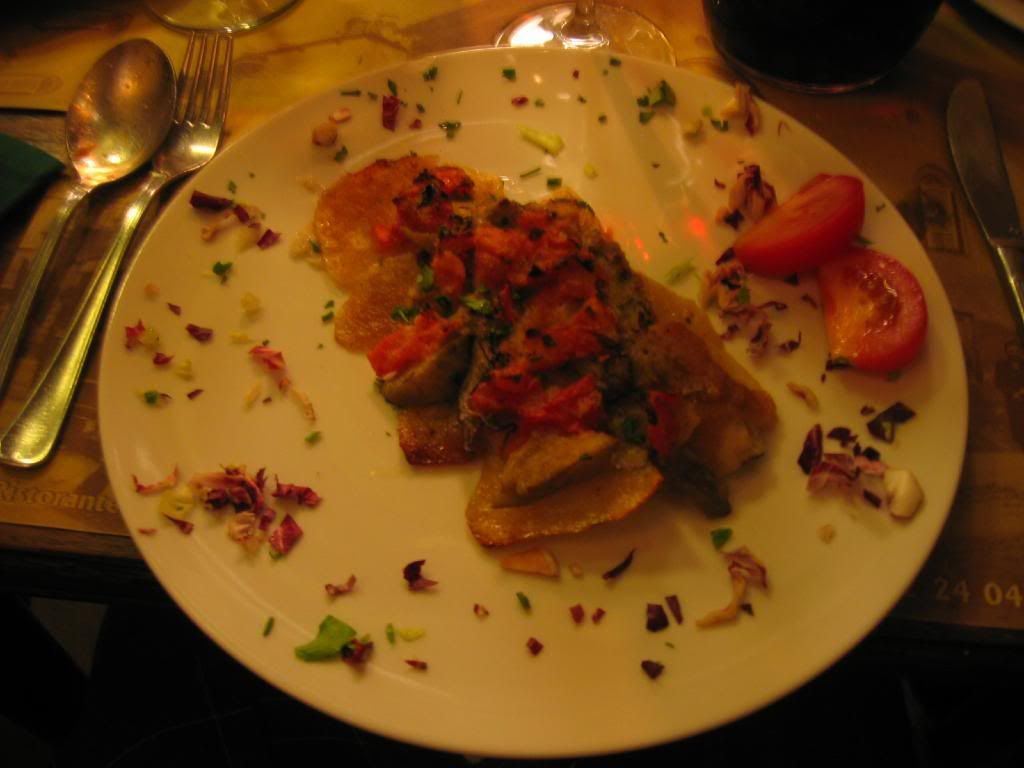 As we were enjoying a few more tables came in – I felt relieved – but it didn’t matter; I was enjoying my meal either way. Then I heard the server again “You like fish?” He gave the same spiel to every table. And every table was American. Oh man, I thought, this is just a place recommended by all of the hotels in the area. It made the whole experience less special for me. But then we were brought out a plate of complimentary cookies. Debate over – it was an excellent dining experience, despite the hokey-ness. 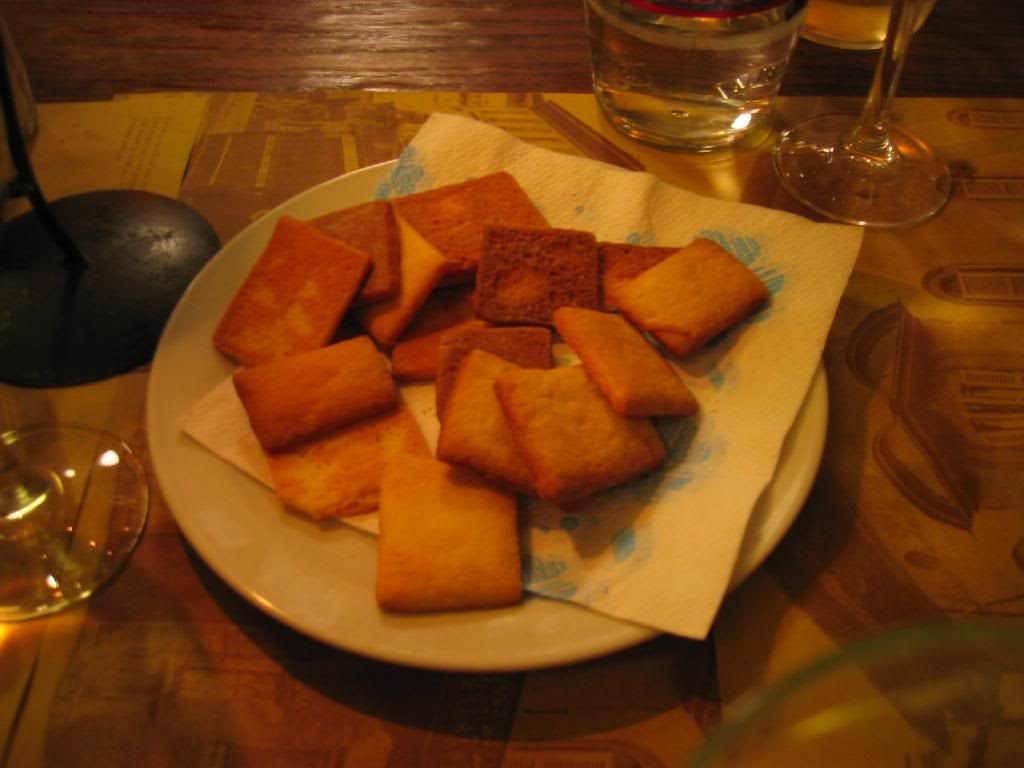 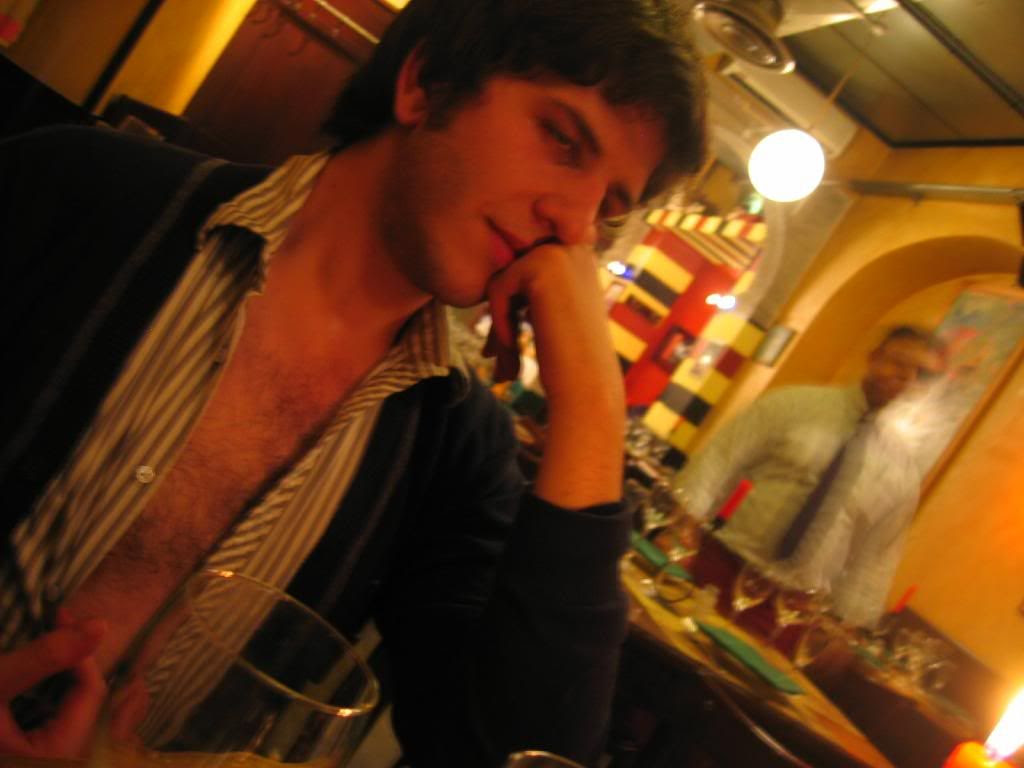 No not that. The table of the American, Brit, and Italian began talking politics. They rolled their eyes at us, for we were talking politics earlier and they must’ve overheard us. I don’t want to get into details, but we decided that we’d had enough and that we’d go over to the Blue Note for a drink. We called Andre, got the address, and asked our funny server for a taxi. “Ok, 10 minutes,” he said. I couldn’t wait to get out of there; my blood was boiling as a result of listening to the snobby trio. “5 minutes.” After 3, we stood up to wait outside so that we could leave as soon as possible. “Ok here is your taxi.” Geppetto pointed to a new gray station wagon parked in front of the restaurant. “Huh – this is our cab?” we asked. “Yes it is,” he retorted, as he opened up the door and took a seat behind the wheel. Now I’ve seen everything… and I’m still wondering who took all of his tables. Then my thoughts turned became clear, and I realized that it was all an evil, evil plan. This guy must a friend of the bartender from Lugano – they did both speak Italian, and Milan is only an hour away from the Swiss town. We weren’t going to escape twice – they were going to make a feast out of our newly pudgy, tipsy bodies after all. “Yes, yes - fatten them up! Recommend the pasta and if they try to order vegetables cover them with gobs of cheese! Cheese imparts a nice flavor… Give them the free bruschetta and cookies too – and make sure to get them very drunk. It tenderizes the flesh.” I shook my head in disbelief – it couldn’t be true, right? “Oh no, I can’t take you there,” Geppetto sighed, “that’s very far.” I was about ready to jump out of the car. Then Adrian suggested that we just go back to the hotel. “Good idea!” I affirmed immediately. Before we could get out, Geppetto took off… how did he know where our hotel was?
No matter, we somehow escaped the jaws of cannibals yet again, and enjoyed a nice Lemoncello at the hotel bar. I guess he got a craving for sour conservatives instead…
Posted by Julie at 3:03 PM

"Adrian and Eric split a half liter of house white; I got my own of red."

I miss your purple lips. Reading this always makes me hungry! thanks for writing bella.

And last night in Vilnius I had Malbec! Followed by a half bottle of vodka... either way i'm sitting in the detroit airport (you guessed it - 4 hour delay to philly). i think i've been up for 45 of the last 48 hours...