One of the great things about touring is the seemingly endless array of action, and as a result, hilarious stories to tell:

On Saturday we had to drive out of Edmonton (thank goodness - it was even colder there than it was in Calgary) and go as far west as we could, so that the trip to Vancouver on Sunday would be minimal. As the great George W. once said "Fool me once, shame on you. Fool me twice... don't get fooled again." So fearing we'd make the same out-of-the way mistake towards a bumble*bleep* town, I researched and found the quickest route and nicest area to spend the night. The drive towards Kamloops was as gorgeous as it was long (which is much better than the even treacherous/bleak ratio we had going for us in Saskatchewan). Our voyage took us through the Canadian Rockies, where we passed through Jasper national park - a breathtaking, snowcapped expanse of mountains and wildlife. We even had to stop a couple times due to a few rogue mountain goats loitering in the middle of the highway. 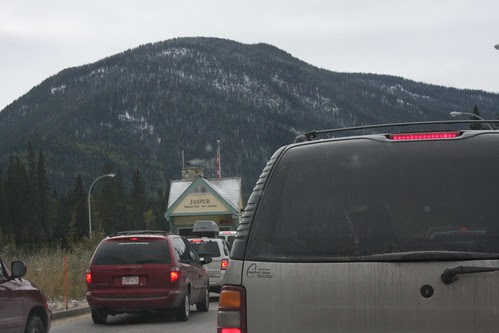 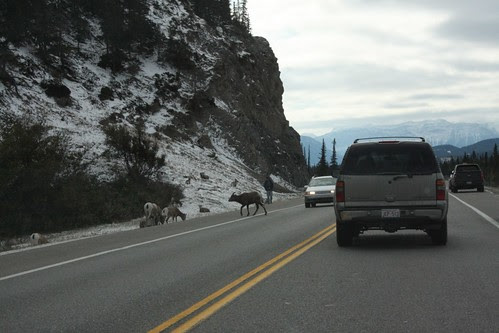 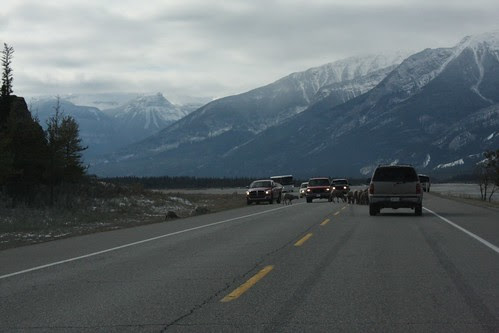 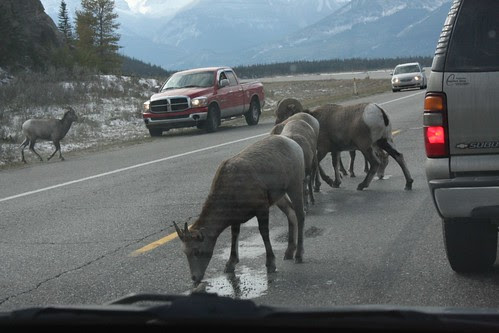 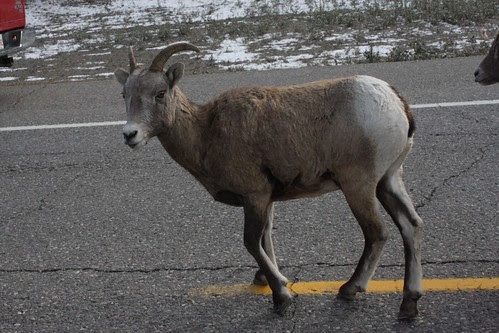 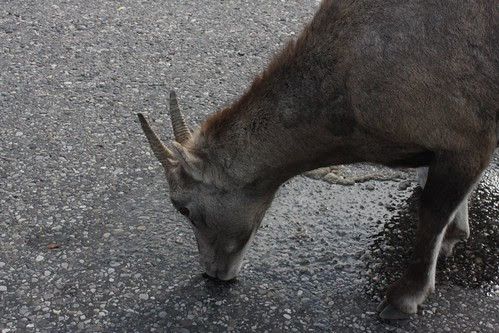 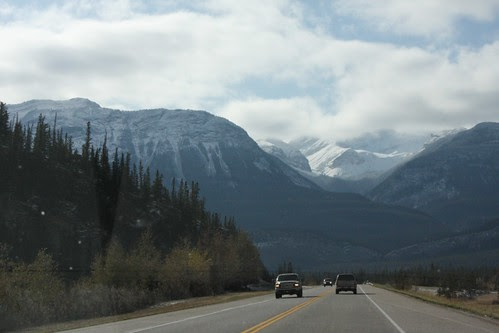 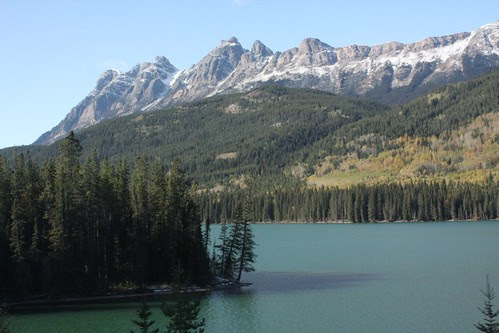 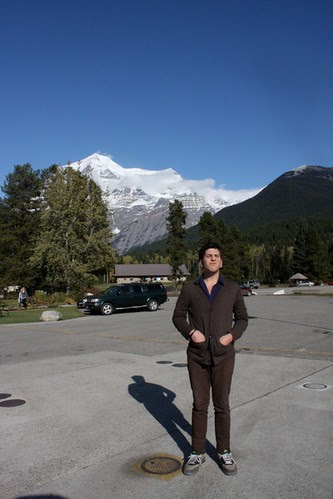 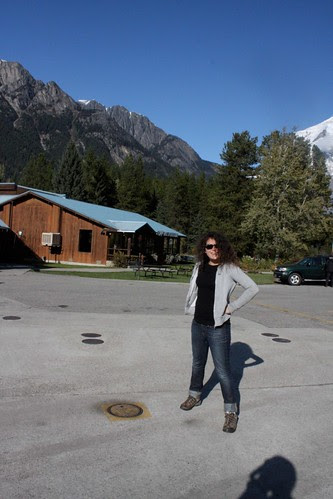 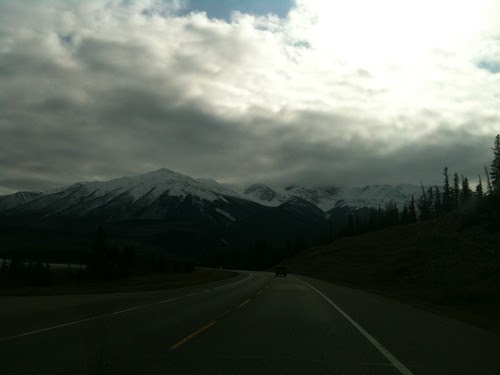 We eventually made it into town at dusk, and enjoyed a lovely dinner at Brownstone, where they were unbelievably accommodating: we basically ate items that were entirely off of the menu. They made Eric a nice vegetarian Israeli cous-cous salad, which followed his à la carte fennel-heavy Curried Tomato Bisque: 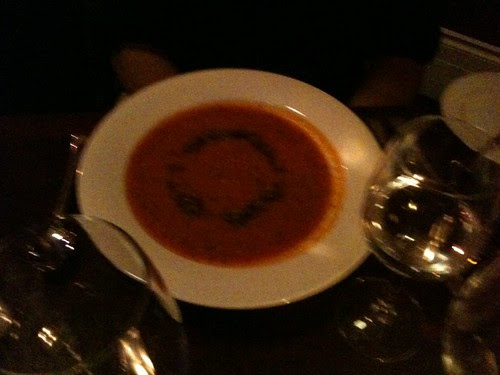 Mom and I split a crab cake appetizer, which starred a rich all-claw meat patty that was showered with a melon cucumber salsa and topped with a mint yogurt quenelle: 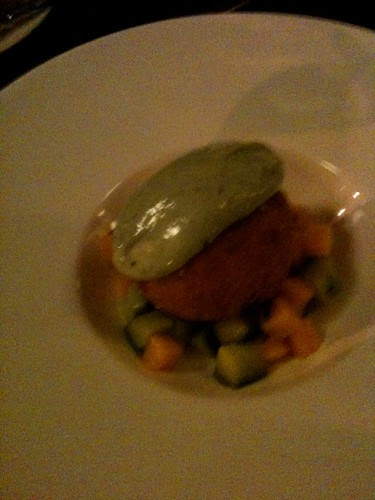 She then had crispy pan-seared local char over risotto, lush with mascarpone. Adrian had a grilled strip steak - which wasn't even offered anywhere on the menu - our server admitted that the chefs in the back "always like to have a few nice cuts on hand for their own meals." Now that's generous. It came classically prepared, doused with cabernet demi-glace and served along side roasted string beans and whipped potatoes. I had the scallop appetizer (which was comprised of two perfectly pan-seared beauties over fruit-studded cous cous and a duo of delectable purees - basil and red pepper): 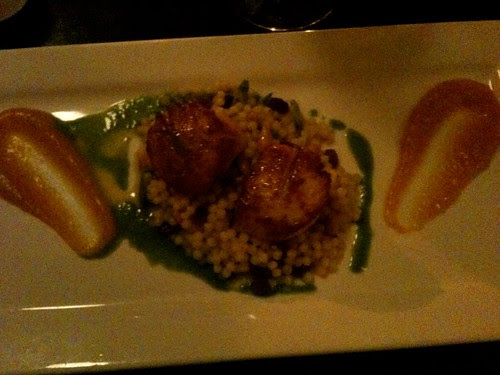 Feeling dreamily satisfied, we returned to our rooms where Eric and I fell asleep to the Food Network. (Although not right away - we were pretty perturbed at some obnoxious contestants on Chopped). 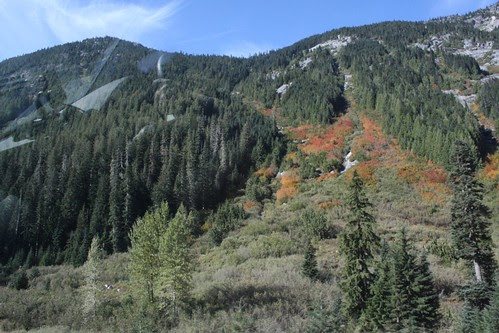 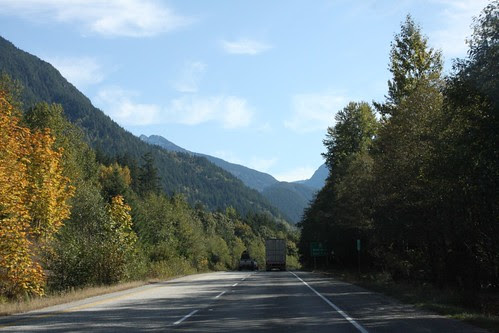 We arrived in Vancouver early in the afternoon, and Mom and I immediately ran out for linner/dunch, as we were (I know; it's shocking) hungry. The hotel clerk highly recommended a cheap, quick sushi spot around the corner - one that Mom had already scoped out earlier on Yelp. So with this second opinion, we found ourselves at Jako (not to be confused with a legendary fusion... oh, nevermind). We started out with tea, miso soup and seaweed salad, and split the following rolls: Real Crab California, BBQ Eel, and a spicy combo (scallop, yellowtail, and shrimp tempura). 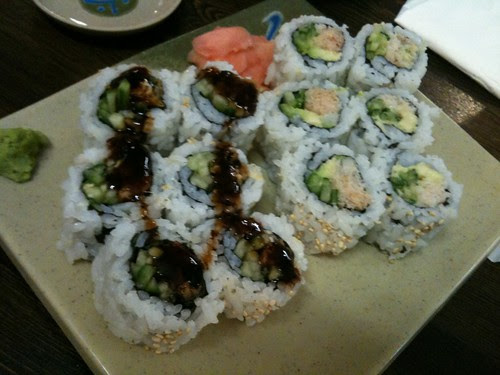 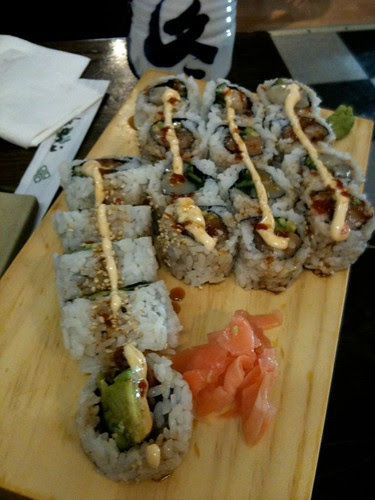 The seafood was so fresh, and predictably so, as we were in a harbor city after all. What was puzzling, however, was the total inverse proportion of quality to price - our meal was only $28 - with tax and tip! 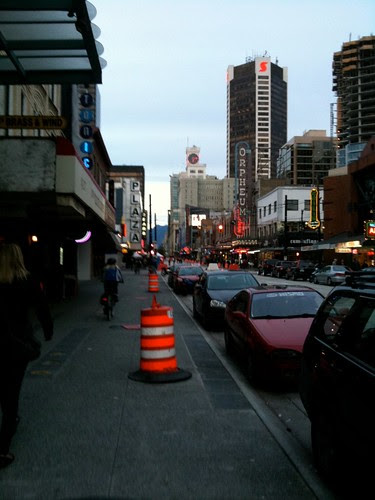 What happened next, nobody could have predicted... but perhaps we did end up paying the price for such an economical meal... Mom got violently ill, and had to stay in for the night. Luckily, I seemed unaffected, and played the show with no problem whatsoever. The only thing we had to worry about was getting someone who could sell merchandise on such short notice - the day before Canadian's celebrate Thanksgiving. The promoter assured us that he could find someone to sell after the show, so we hit the stage with only minimal worry (which was all for Mom - whom we hoped would have a swift recovery).

We played a great show, and ended up with a nice attendance, considering the holiday. The fans were rabid, shouting and dancing, throwing notes on stage (Happy Birthday, Al). A frail fellow was even carried off, feet scraping the floor, with his arms wrapped around two friends... I supposed he partied too hard before the show...

Just when we thought the night couldn't get any weirder, we were escorted through a sea of people towards the merch booth, so we could do our usual meet'n'greet. "Ok, who's got something to sign?" Adrian asked with a big grin. Imagine our surprise as each fan then held up fistfuls of money, shouting, "We're ready to buy!" We quickly realized that the promoter has not found any body to work that night, and without much hesitation, we began to hawk our goods like pitchmen from a bygone county fair. "Who wants a tee shirt? Getcha tee shirts heeere! We got discs, but not just any discs - compact - music's newest, best, groundbreaking technology!" We proceeded to sell for the next 30 minutes, alternating between collecting money, finding shirt sizes, and unwrapping CDs. Oh yeah, and we signed them too. It was total mayhem, but kinda fun, and we all have a new appreciation for anyone that does this.

We ended up doing pretty well, and decided to celebrate by listening to a blues band down the street. We hung out for a drink, but then our third wind died down, and we were ready to hit the hay. Of course we stopped at a convenience store along the way and bought candy (it was our last chance before heading back to the United States of High Fructose Corn Syrup). There we saw a pimp negotiating a deal over the phone, while his... er... employee adjusted her skirt and hooters. We got out of there as quickly as possible and retired to our rooms, where we ate Bounty Bars and watched "Curb Your Enthusiasm" and "It's Always Sunny..." until we passed out for the night.

Quite entertaining times were had in Canada - and I was sad to leave.
Posted by Julie at 6:51 PM 7 comments:

I'm going to write a new road diary shortly, but in the mean time, I've uploaded music from my new project, PAPER CAT. It's a taped concert performed by myself, Eric and Robbie "Seahag" Mangano at John and Peter's in July. Be sure to check the site frequently, as we'll be recording in my studio in the coming months... 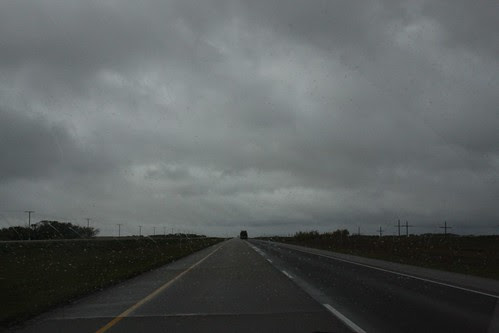 I know what you're thinking: "How in the heck did you guys end up in Saskatoon?" It's a fascinating, endearing tale really, and I feel oh-so compelled to share it with you, my loyal readers.

We had just finished playing a wonderful show in Winnipeg on Tuesday (thanks to the many Peggers for attending!), and began to plan our grueling 825-mile journey to Calgary. We were told that the only town for miles betwixt those two fair cities was Saskatoon, so since we feared we'd end up famished and frozen on the side of the road (or hacked up by a crazed hermit), we took the advice and headed slightly north - even though Calgary is (essentially) directly west...

The drive was so bleak - for miles under smokey skies we could see nothing but an expanse of pale, dried-up grass and deciduous trees of violet and viridian hues. There was the occasional farm, surrounded by bails of hay or tumbleweed - yes, that's right - tumbleweed - but it was so desolate that it actually made us feel good about our wacky decision to head north. 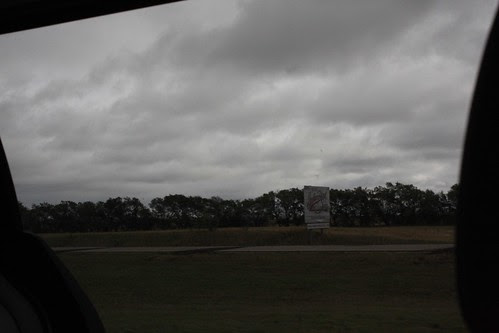 After 9 hours of sheer boredom and starvation, we finally made it to Saskatoon, and I was amazed we hadn't started to determine who the weakest member of the crew was, to be sacrificed to cater the rest of the us. We checked into our hotel as quickly as humanly possible, and boy were we lucky, as we snagged the last two rooms. When we asked the clerk what was going on in town, he smiled:

Words could not have conveyed any more information than his utterly empty stare.

Against better judgment, we took his recommendation for dinner. The 2nd Ave Grill ended up being fine, but we're admittedly spoiled when it comes to food - we just have really high standards. This was possibly the best restaurant in town, though... but my "pan-seared scallops" were more like "boiled frozen mystery mollusks." 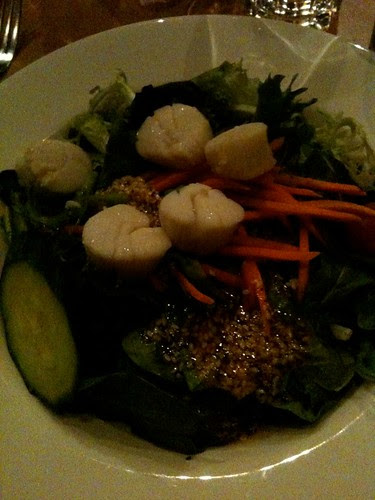 The service was definitely excellent, however, and they suggested we go to the Tapas bar across the street for drinks. The bartenders were skilled and sassy over there - especially Joe Jackson (not to be confused with the singer), who made excellent beverages decanted from a crystal skull. Eventually we discovered that he was a musician as well (again, he's not to be confused with the singer), so we traded gig stories and talked about where we'd play if we ever got booked in Sasquatch City. It was great fun, but after a round or so, we were ready for bed.

The next morning, we found a Denny's (I couldn't get online to find anything else) and paid way too much for cold eggs (it was attached to a hotel) - but no matter, we just wanted to get the heck out of Saskatoon and on to Calgary. When we got on the highway, we soon realized our trip was going to be even worse than the day's prior. It wasn't just bleak - it was treacherous. There were only two lanes - one going in each direction, with nothing like a median to divide the road. So imagine us, barreling down the road to get to civilization, passing trucks in the wrong lane, potentially ramming into cars head-on. Our stomachs turned every time we succeeded an opponent. When we finally made it to the Drumheller/Three Hills intersection (which would eventually lead to a four lane highway), we realized we were out of gas. We couldn't see (and hadn't seen) a station for miles, so we looked up the nearest one in Genie. Luckily, there were two in Three Hills - but none for miles after that, so we knew we had to drive a bit out of the way, but at least we wouldn't be stranded, preserved perhaps forever in ice in Nowhere, Alberta. Immediately Genie prompted us to turn left - down a muddy, gravel road which seemingly led to nothing but more bails of hay. Eventually, we inched our way through the muck to the quaint town of Three Hills, where we were delighted to find a service station and - yep, you guessed it - a Subway. The sole kid working there was blasting Dashboard Confessional like it was the latest craze. Ugh. Everyone grabbed a sandwich - except for me - come on, I wasn't gonna settle for toppings on a roll after having starved all day. Everyone gulped down their meal (yes, I'm implying that very little chewing was involved) and we piled back into the van, eager to complete the final 90 miles of our journey.

At long last, we arrived in Calgary, where it was 23°F and snowing: 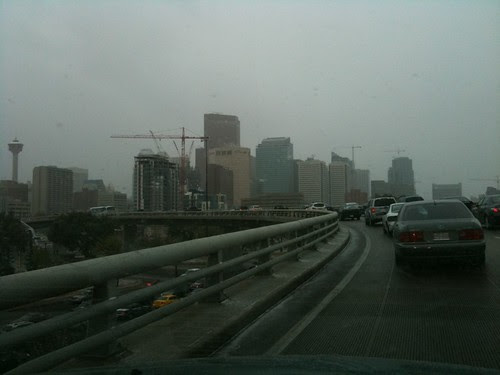 Eric immediately began to set up his drums, and I witlessly ran back out into the tundra to find a quick meal. Of course I dragged my mom with me - misery loves company. Besides, she was still hungry after having a meager cheese and tomato sandwich. After scrambling around in the frigid, bitter rawness, we found our recommended spot - Veggie House. I ate my "meat" and veggie stir fry so quickly, I had to take a picture of Eric's in order to remember what even looked like... I vaguely recall that it was exemplary... 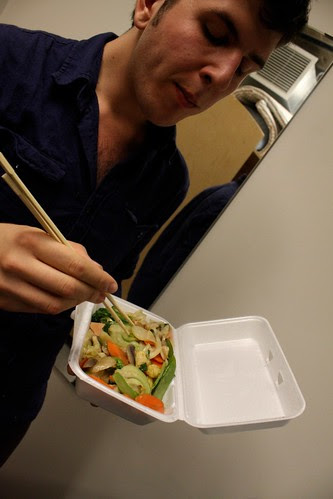 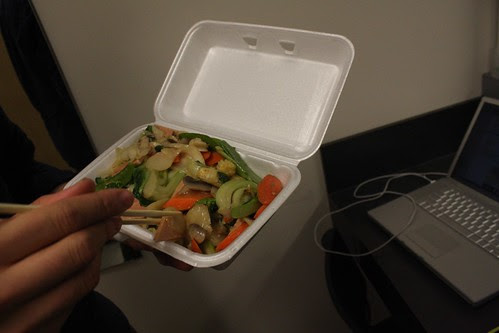 Meanwhile, we only had fifteen minutes for sound check, and it was then that we discovered that going to Saskatoon was entirely unnecessary - in fact, it was detrimental. We could have stayed in Medicine Hat, and saved two hours from our trip (and ridden on a nice, clean, four lane highway).