November 13 - PHILADELPHIA - Back to the Future

Okay, so this whole blog thing is more labor intensive than I thought. I had a hard time keeping up at the end of the tour, as we were in the van most of time and I got carsick every time I tried to type. Now it's a matter of remembering what went on - it's tough trying to recall what I ate for lunch in Austria two weeks ago! I promise the posts will come as the jetlag slowly goes away and I am able to summon up everything. In the mean time - I've been a cookin' machine since I came back. A month away from the stove is just too long for me! Last night I made dinner for friends: Spicy Garlic Shrimp and Broccoli Rabe over Mezze Rigatoni
(serves 6-10, depending on your guests' appetites)
adapted from the December issue of Cook's Illustrated  (my favorite cooking mag)
Preheat the oven to 350ºF.
If you're stove has seen better years, you may as well start boiling a big pot of water now.  In the mean time, prep everything so you have a nice mis-en-place.  This 3 pot dinner should come together quickly so it's best to have everything ready to go.  Chop the garlic first, as recent studies show that letting chopped garlic rest for at least 15 minutes activates cancer-fighting components.  While you chop the shrimp, throw the shells into a small sauce pan with the wine and the clam juice.  If you buy peeled shrimp - don't worry.  This is not a necessary step, I did it just to fortify the shrimp flavor by making a nice stock that I'll use later in the sauce.  Heat on this pan on medium high and once it starts to bubble and boil, cover it and bring it down to a low simmer.  After twenty minutes, you can turn it off as that's all it takes for the shells to release their flavor.  You also don't want too much of the wine to evaporate.
Toss your chopped shrimp with 2-3 tablespoons olive oil, 4 tsp minced garlic, 1/2 tsp (or more) of salt, and a dash or two of red pepper flakes.  This will allow the garlic and pepper flavor to really permeate throughout the shrimp.
Once the water is boiling, add a handful on salt and throw in a bunch of broccoli rabe.  After two minutes, remove it with some tongs and put it in a colander in the sink with some ice cold water running.  Alternatively, you can plunge them in a large bowl of ice water - I didn't have a large bowl handy, so I went with the sink technique.  Put the second bunch in and repeat.  After the bunches are cooled down, pat dry and chop them into one inch pieces.  DO NOT discard the water - you will cook the pasta in the same pot.
Add the bread to the oven to warm.
Heat a large skillet with 4-6 tablespoons of olive oil over medium low heat.  Add the whole garlic cloves.  Saute until lightly browned - 5-10 minutes.  Remove the garlic with a slotted spoon and chop it up.
Cook the pasta according to the manufacturer's instructions.  It should take about ten minutes.  If the pasta finishes cooking before the rest of the meal, drain it, put it in a large serving bowl and toss it with some olive oil to prevent sticking.
Increase the heat to medium/medium high.  Add the shrimp with their marinade and leave undisturbed for two-3 minutes (until the bottoms appear pink and the edges are slightly opaque).  Flip them over with and cook an additional minute or two, until they are just cooked through.  Remove them with the slotted spoon and put them in the large serving bowl.
Add the broccoli rabe, a dash of salt and two teaspoons of the uncooked minced garlic.  Cook about five minutes. Remove with the slotted spoon and add to the bowl with the shrimp.
Add the rest of the minced garlic and as much red pepper flakes as you'd like (around 1/2 - 1 tsp).  After about a minute, add the flour and stir constantly to prevent lumps.  After another minute, put a strainer or colander over the skillet and pour into it the shrimp/white wine/clam stock so that the shells stay behind.  Stir constantly until thickened (about two minutes).  Turn off the heat and add the parsley.  Slowly add the butter and lemon juice, stirring constantly.
Once the butter is incorporated, pour the contents of the large serving bowl (which should contain the shrimp, rabe, and pasta) into the skillet. Alternatively, you can add the sauce to the bowl and toss everything there. Toss together and season with salt and pepper if necessary.  Serve with warm baguette, lemon wedges, and the best extra virgin olive oil you've got.  Oh yeah, and a couple bottles of that Luna Pinot Grigio. 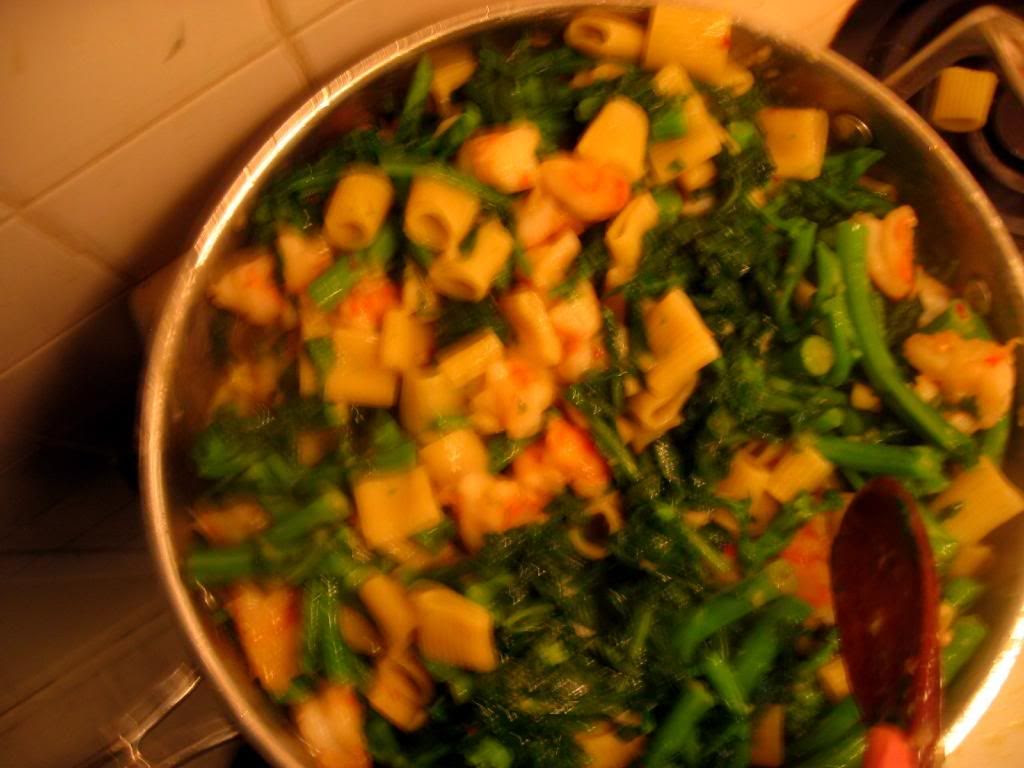