December 6 – ADELAIDE – Back in Black

We checked into our hotel in Adelaide yesterday to discover that our rooms were all luxury suites with king-sized beds, couches, washer/dryers, kitchens, dining rooms, jacuzzis and balconies. 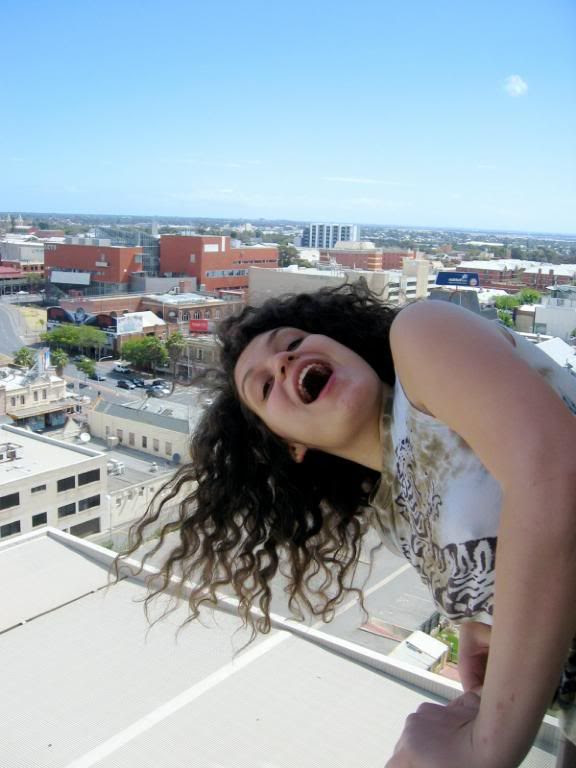 I was so excited by the fact that I had a complete kitchen that I went shopping and bought brekkie supplies. When it was ready, I invited Eric and Adrian for a surprise meal – fried eggs, multigrain toast, and stewed apples. I even took a cue from Soul Food and made some caramelized red onions. 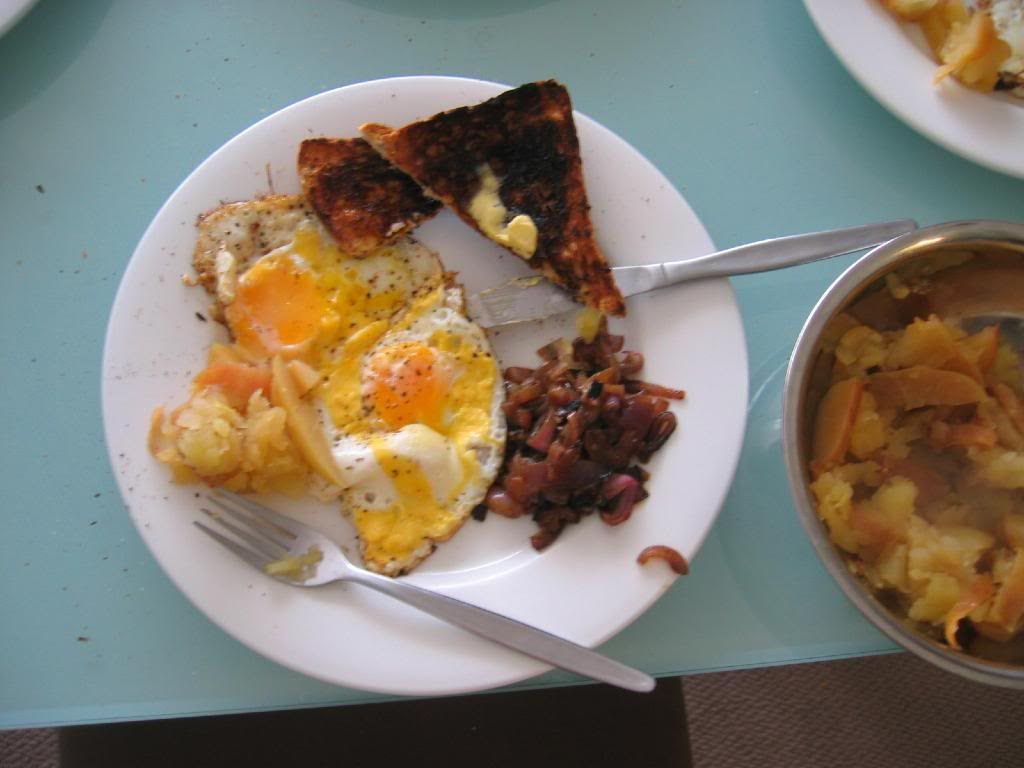 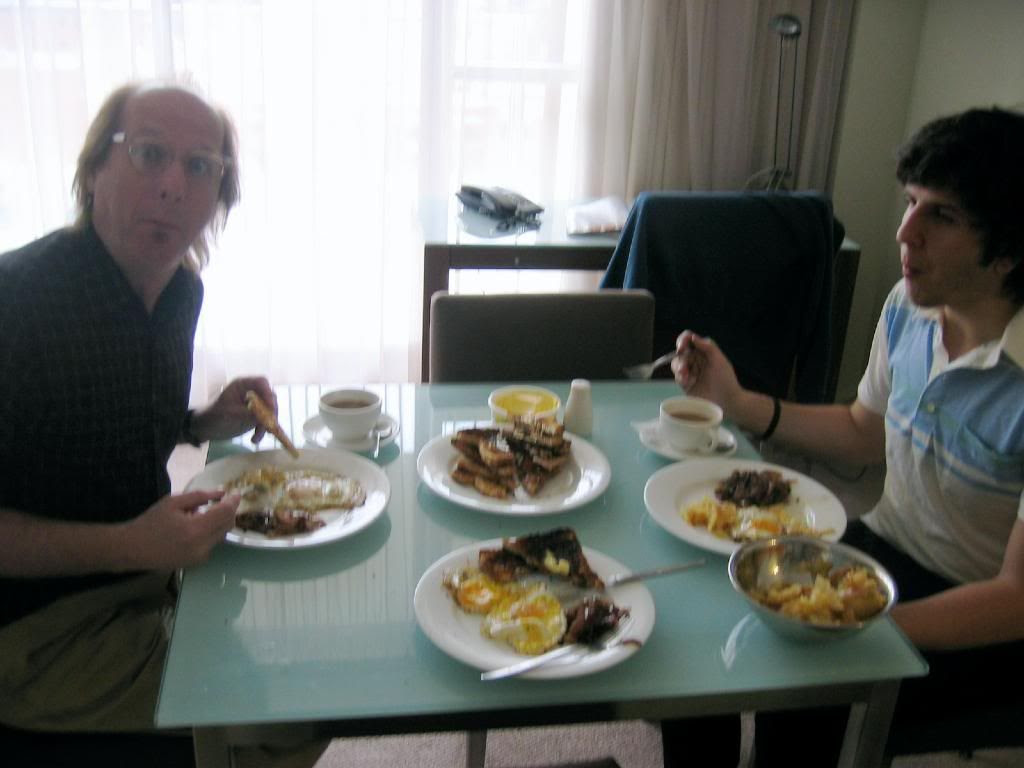 After a little digestion, we departed for the festival grounds again to rehearse “Back in Black.” See, the grand finale of the festival was to consist of all of the acts performing different AC/DC hits. Adrian immediately feared singing Bon Scott’s insanely high, unique vocal line. He was more than a little relieved when he discovered we’d have Susie Keynes, a local Adelaidian belting it out for him.
After our rehearsal, we decided to capitalize on the absolutely gorgeous day by grabbing a drink outside. The street behind the hotel was a little seedy, but it was nice and sunny so we walked up and found the first decent looking spot to enjoy a nice cold Coopers. Adrian and I went inside to get the drinks while Eric reserved a picnic table outside. Big mistake – a group of six cougars hovered him like vultures over a ripe piece of meat. These ladies were seasoned to say the least. Clad in leather and black tops so tight that their were just shy bosoms bursting out of them, their caked faces gabbed away about their night out. They proudly informed us with sheer joy that they were going to the male strip club across the way. They even gloated about not having to pay a cover because they were about to eat a three-course meal with double dessert. “And thay git totally nayeked and give you a lap dince for 20 dullahs!” We choked down our drinks and promptly took a taxi to Gauger St, all the while attempting to muster up our lost appetites.
Luckily, we were about to have some of the most amazing Chinese of our lives.
Ying Chow an unassuming place, like any other Chinatown spot you’d find in any city: big glass storefront windows, bright lights, and tight seating. What separates this place from the others is most certainly the food. We knew it would be fantastically good as we stood in the threshold of the place, waiting (for what seemed like an eternity) for an open table. We couldn’t help but stare down every dish the table right next to us was getting. Plate after plate of steaming, aromatic chow was placed in front of the young couple in tight jeans. Our eyes and nostrils widened but we had to quickly avert our attention each time they glanced back up at us, knowing full well that their food and table were being stalked by a bunch of ravenous Americans. Several servers approached us to ask us if we wanted to put in our order ahead of time. Unable to decide between four pages of deliciously unique-sounding grub, we decided to wait until we were seated. Finally they got up and expressed regret for taking so long. We returned the apology for gawking at them while they ate.
Before we knew it, a multitude of workers came out of the kitchen to wipe down our table and take our order. 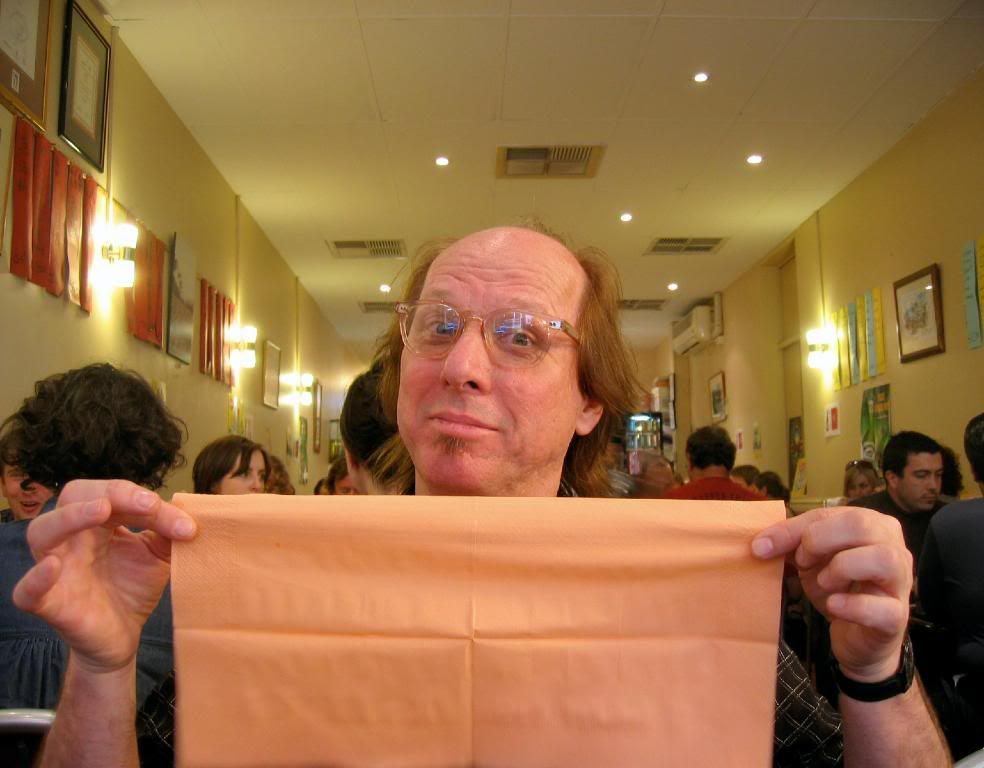 Unable to settle on any one dish, we determined that it would be best to get a couple different plates and share family-style (this is how Chinese should be done anyway in my opinion).
First they brought out vegetable spring rolls with sweet garlic chile dip. Seems pedestrian and commonplace – these, however, were other worldly – perfectly crisp inside and out with slightly syrupy spicy sauce (alliteration, irony, oh never mind). 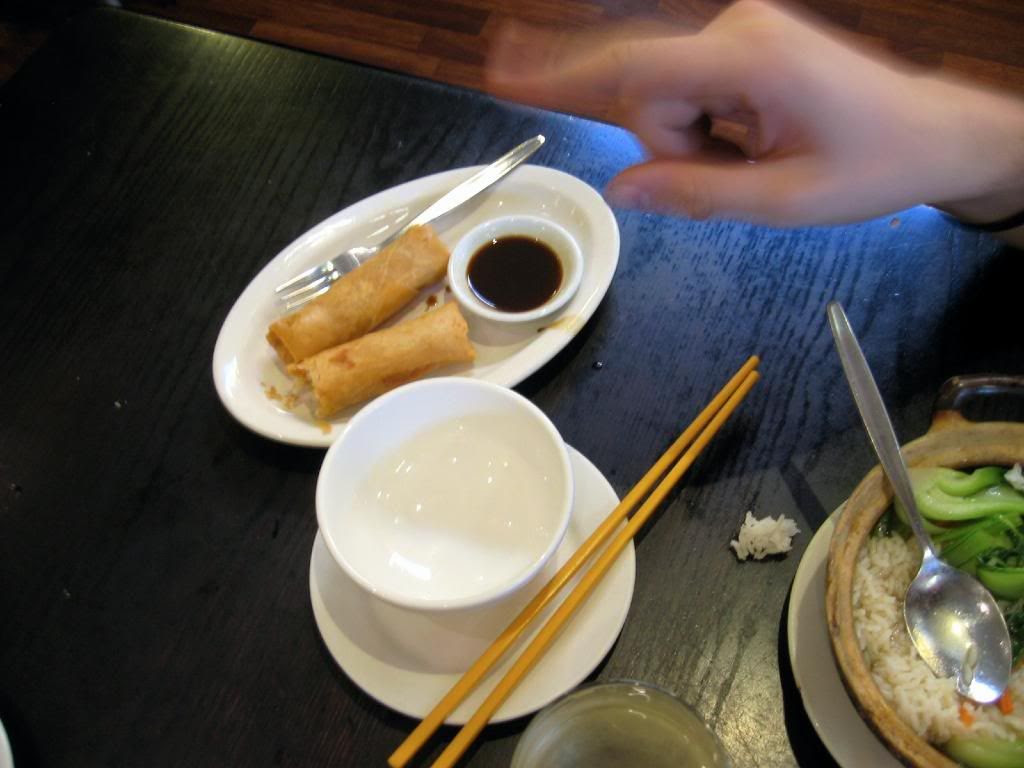 Next they brought a big thermos full of rice, which I found very smart as it would never get cold. Eric's main dish came shortly after that. It was a vegetarian clay pot, full of exotic mushrooms, baby bok choy, strips of wheat gluten, and some other indiscernable vegetables - no matter - it was delicious. 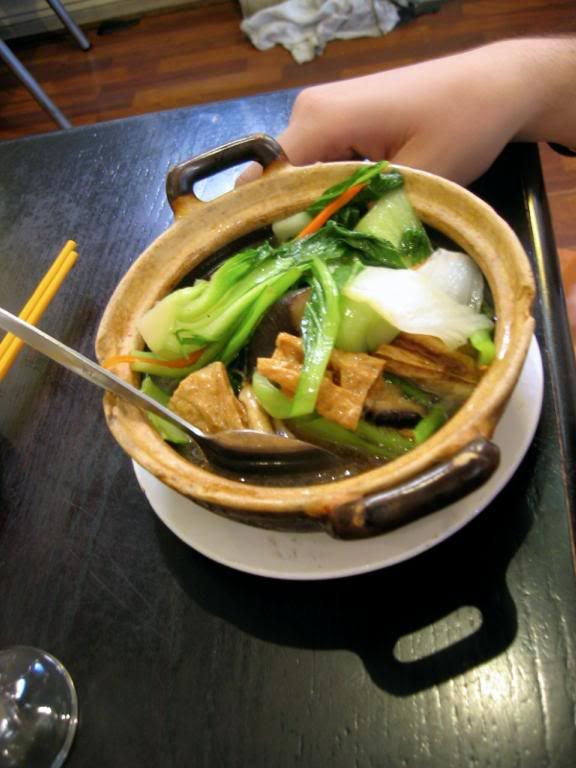 Adrian ordered a similar dish - though his included poached chicken and I could smell that his was heavier (or shall I say zingier) on the fresh ginger. 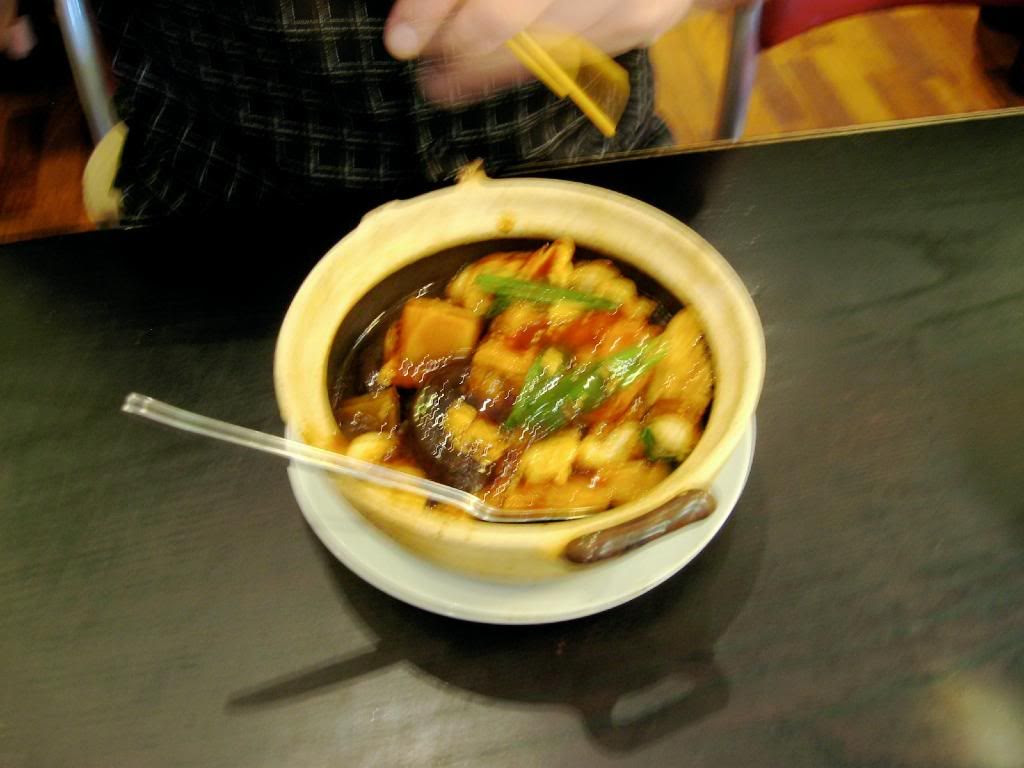 When reading the menu, my eyes lit up when I saw that they had a steamed scallop dish. They were so unbelievably fresh they tasted like they had just fished them out of the ocean (in a good way). Topped with chopped garlic, wine and cilantro, I was in heaven. 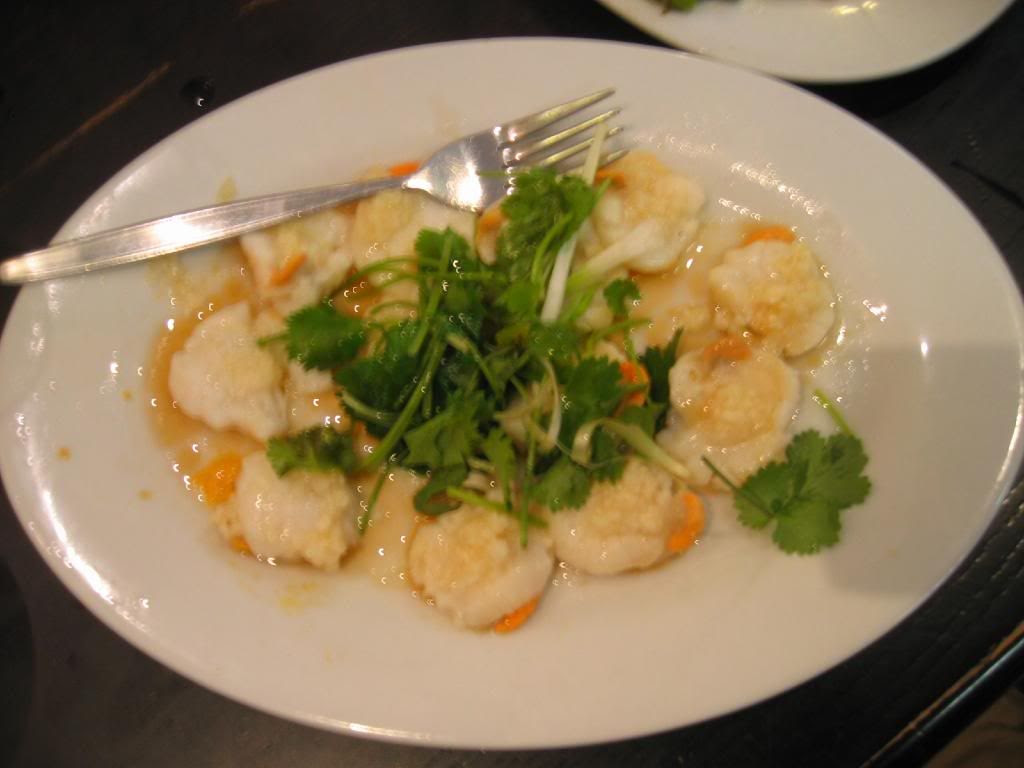 To share we also got salt and pepper squid and broadbeans (aka fresh soy beans or edamame) with chiles and shredded bean curd. These were also to die for. 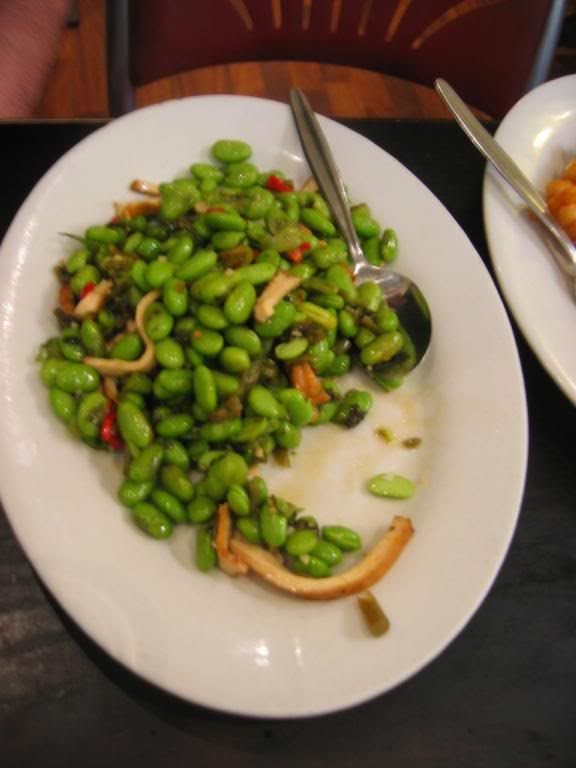 Andre came late and got a bowl of the house soup (with extra chiles). Feeling like we should eat with him, we ordered more spring rolls. 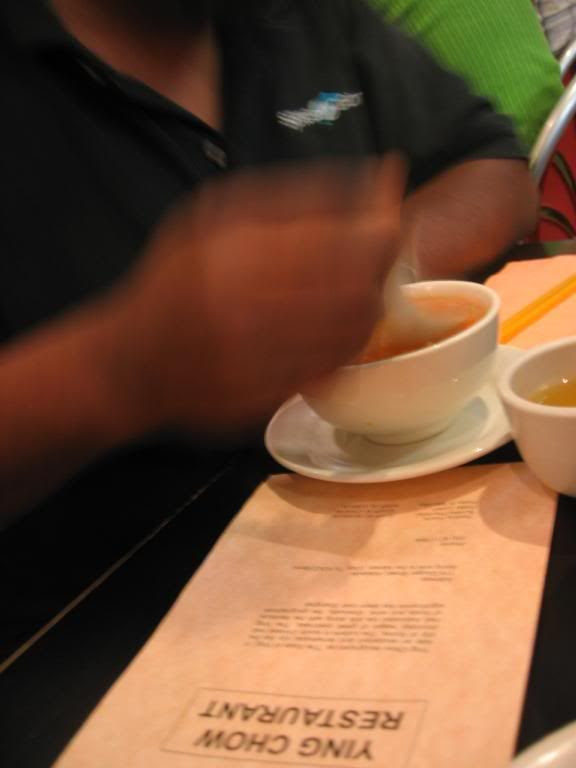 Feeling fuzzy and full, we rode the tram back to see Derek Truck’s band at the Wah bar. (The lighting was dim so I apologize for the blurry pic - but you get the idea). 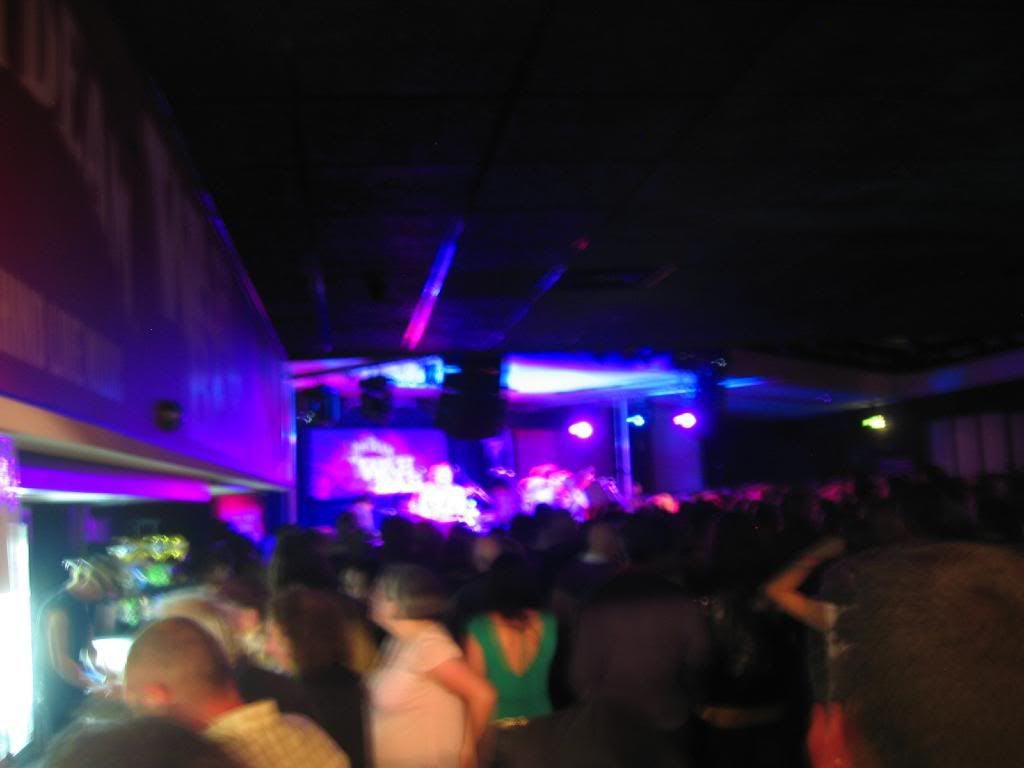 Admittedly not having heard too much of the ensemble’s material, I was totally taken aback – it wasn’t just a slide solo blues frenzy. It was genuinely awesome, and Adrian was really digging some of the more Middle Eastern influenced melodies (gee, I wonder why). Eric was fixated on the drummer, who produced a groove so tight I defied anyone not to bob their heads during the whole set. Of course each other member was brilliant in their own right, so the interaction between them put the show over the top. I have to confess that we were jealous, having played the big stage the day before. We agreed that next time we come to this festival, we want to play the Wah Bar. There’s just something about a tight room packed with happy people – there’s just an energy that radiates, oscillating between the audience and the band.
After the show, we continued the party over to Le Boheme, where we were sure to spend the rest of our Per Diem, but for a good reason – they just make the most delicious cocktails there. 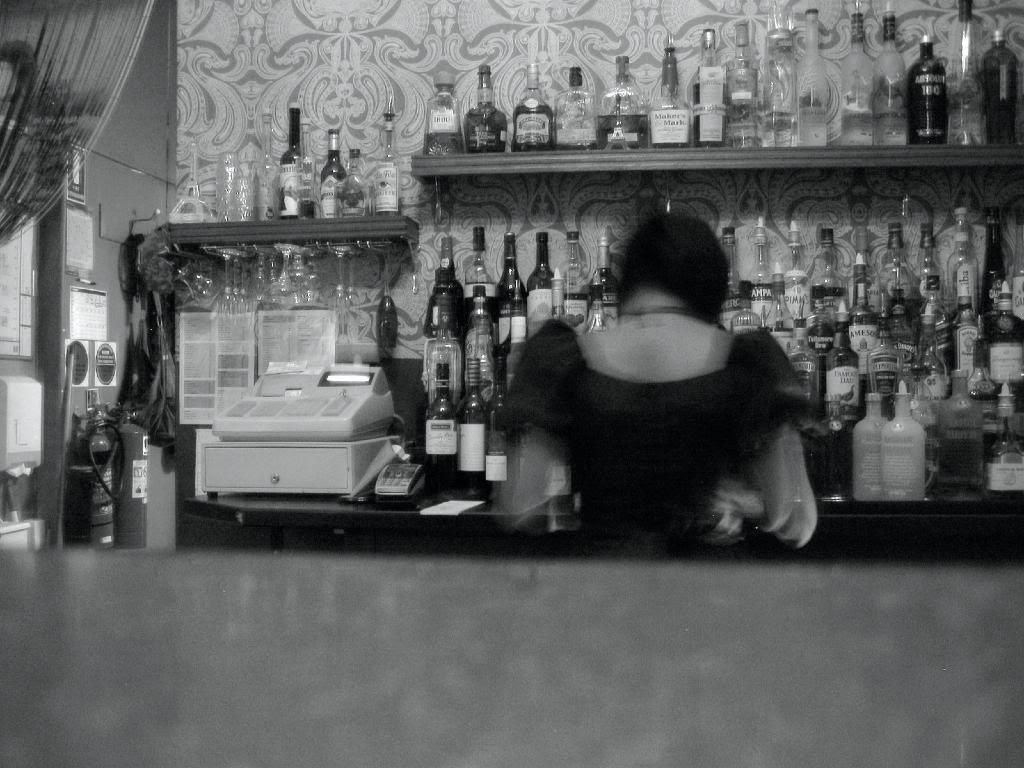 Adrian unpredictably got a classic gin Martini with olives. Oversized and with just a kiss of vermouth, it was the perfect martini. I had a “Pears Daisy”, which contained fresh Pear juice, vodka, and torn mint (I’m sure there were other ingredients, but obviously my memory escapes me after a night of drinking). Bright and tart, it was totally refreshing, a nice riff on a Mojito. 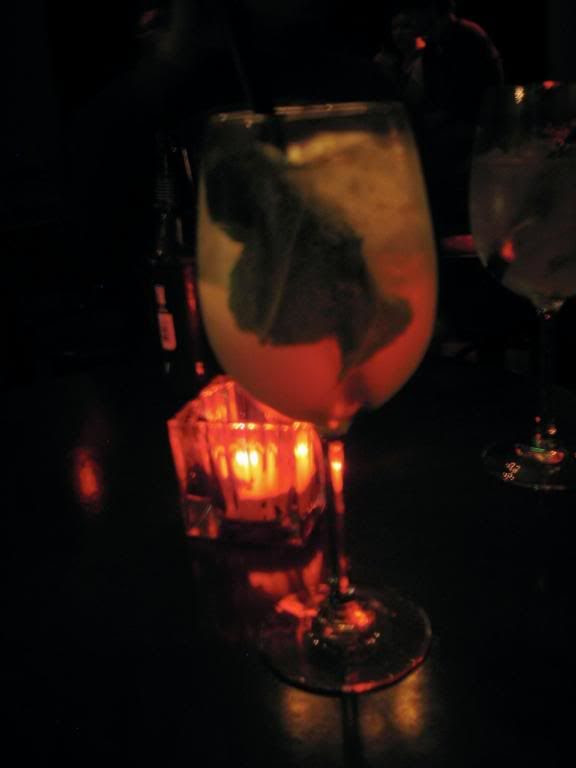 Eric told me to order something for him – big mistake. After I ordered, the bartender flashed a mischievous grin. I beckoned Eric over as the show began – the talented wizard placed a champagne flute on the bar and proceeded to douse it with absinthe and light it on fire. What happened next is all a hazy blur, as he moved swiftly with the flames to create the final product: “Absinthe Lovers.” And so the night concluded with delectable concoctions that put a nice nightcap on a fantastically enjoyable evening. 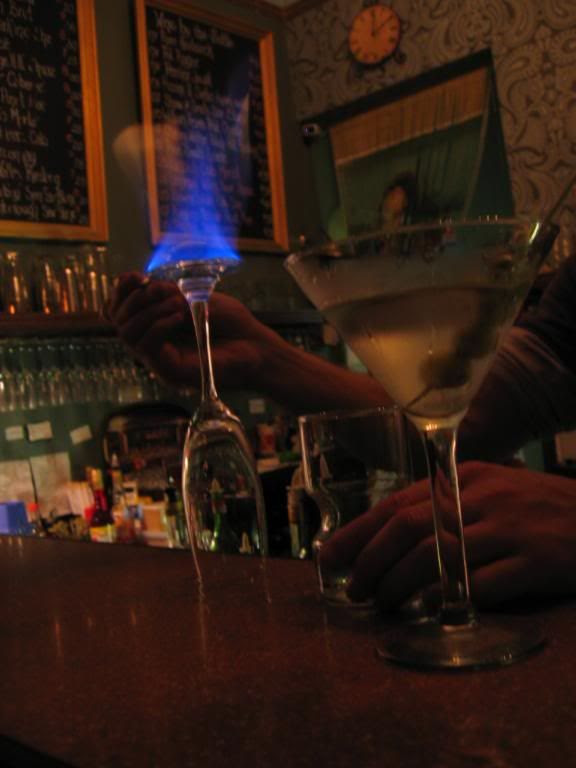