First off, I just want to thank everybody that came out to support me this weekend! I had an absolute blast, and it sure felt good to be on stage again!

The wonderful weekend of music started in Bethlehem on Friday, where I played the Funhouse with , featuring the amazingly awesome André Cholmondeley on guitar and Bob Ramos on drums. I subbed for Antar Goodwin, and let me just say those shoes where not easy to fill! Good friends The Great White Caps followed, and their supremely tight surf-punk sound made it impossible to resist dancing the night away. The Funhouse certainly lives up to its name, and I hope to be back soon (and the same can be said can be about playing with again). 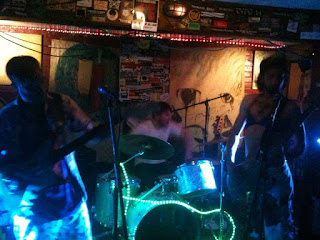 Saturday was my day off, but I stayed in Bethlehem to catch another GWC show, this time at the cute-but-punk rock Wildflower Café... and wouldn't you know it... Cheers Elephant opened! Thanks to Jon and Tara for being so accommodating, and to all of the Downingtown School of Rock students for making the trek up for a rare all-ages night! 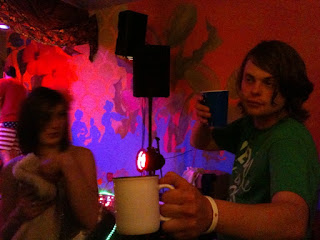 I began to feel spoiled by Sunday, but I knew I had one more show to knock out (and rock out) before returning home. Hitching a ride with Cheers (who, oddly enough, also had show at Piano's that night), I made it into NYC with time to rehearse and drink lots of coffee to prepare for the PAPER CAT show at Cake Shop. When we pulled in to start unloading - I couldn't help but laugh out loud... Piano's was located about 3 doors down from Cake Shop. So as you can imagine, the rest of the evening was spent hopping between the two venues... topped off with a Mamoun's at 3 AM, I'll venture to say that was one of the best weekends EVER.

Robbie taped the whole PC performance with his Flip, so here's the show, conveniently chopped up into songs and put into a playlist, for your viewing pleasure. Enjoy!

PS - Stay tuned for a pre-order option for my solo disc... the link should be up on the site by the end of the week!
Posted by Julie at 4:09 PM No comments:

Hey guys - sorry for the lack of blog updates! As many of you can probably tell, I've been in a little over my head lately (making my website, writing and recording my debut solo album, producing Cheers Elephant's new release, rehearsing with PAPER CAT, updating all the social network profiles... and of course, cooking some delicious food).

So besides posting recipes here, please feel free to request what else you'd like to see in this space...

I know a lot of you are gear-freaks like I am... I should let you know I've been loving my new Woolly Mammoth distortion pedal, as well as my Roland VB-99 (the star of my solo album).

Also, this weekend Robbie came down and we recorded some new jams - and what will hopefully become some new PAPER CAT tracks. We also rehearsed for our upcoming show at Cake Shop in NYC, and set up our laptops with iMovie to capture our performance in the studio. Check out this video of a song called "Intro", where I'm rocking my new Lakland Decade through the Mammoth and my newly refurbished b15! First, I mixed the tracks in Logic, and sync'ed it up to the two clips in Final Cut Pro... a little animation, a little text, and I posted it to Youtube within hours - I hope you enjoy!