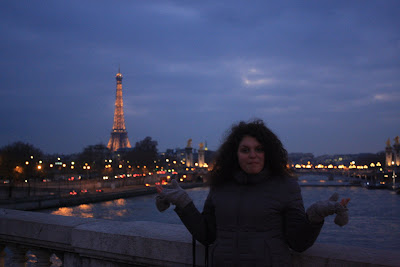 Ah, if only I had been in Paris for the last few months... though those three days were pretty nice.

Okay, okay... I suck at updating the blog - it's just so tough when I'm not on the road for a while. See, the touring maxim is "hurry up and wait," so those days contain a relatively even ratio of fantastic, new experiences to sheer boredom. When I'm home, I recollect and relax, then I cook, I write, I play, and I record. Sounds peaceful, no? Well, these days have actually been quite busy - I've been working on my second album, and lately, have been finding myself in almost as many bands as my brother... you may have seen me advertise some shows on my site and social network pages, but I guess it's only fair to give you some more specifics about each project:

First there's Pink Revolver AKA Femfuze (not sure what the name will be). This is a supergroup comprised of (what will eventually be) a rotating cast of amazing female musicians of all different ages. We played a show in Bound Brook earlier this year, and that lineup included:

It was truly neat to get to play in an all-female band... it definitely had a different dynamic that I enjoyed immensely - these girls kick some serious butt! We played originals by Jane, Viv, and Rachel, and did funky arrangements of some classic songs by female artists (like Joni Mitchell, Annie Lennox, Joan Jett, Janis, Blondie... etc). While there are no further confirmed gigs yet, I expect to be playing more in the very near future... stay posted.

The next band I'm going to introduce you to is Dragon King. It's an "indie rock/psychedelic/swag" group comprised of some of Philly's finest artists. There's my good friend Dom Angelella on lead vocals and guitar (who kindly invited me to become involved with this project), Ritz Reynolds on synths and overall amazing production skills, Joe Baldacci on drums, as well as a slew of contributors. You can hear the band's music at the link posted above, and while I can't say that I played on any of the recordings on that page, I expect to lay down some bass for most of the new stuff. What can I say? I always wanted to be one of the cool kids.

What else? PAPER CAT did some taping up at NBC Studios earlier this month - we will be featured on Music Box (a local show that will hopefully surface on the youtube). Eric and I also recorded parts for a song entitled "All You've Got To Do Is Take Me Home", a song written by Skip Denenberg for the M.O.M.S. Animal Rescue. There will be other collaborations, and guitar parts have already been added by Steely Dan's Jon Herington (!) I'll post when the video is finished...

And more... I've been doing some improv gigs around town - I did one heck of a crazy jam at Triumph Brewing Company in Philly a few months back with Tim Motzer and Chuck Treece, and am doing another June 7 with Tim, Eric, and Chris Cuzme. I've also been doing some experimental duo shows with drummer Carl Bahner - think my solo shows, but beefier... erm... seitan-ier... oh wait, that sounds evil... tempest tempeh tempo-er...

PS - There are actually a few more projects that are still in the works. I'll post when I get confirmations about those... I plomise.

PPS - I know many of you might be thinking, what about the Power Trio??? Don't worry, we plan on playing some shows this year... I'm just waiting for details.
Posted by Julie at 3:40 PM 2 comments: