I woke up to Eric pounding on my door – “Julie… wake up! Let’s see if there’s breakfast!” I was enjoying my slumber and figured it was too early for such nonsense. I was totally surprised to find out I’d slept ‘til 10! We made it just in time – not without struggling to tell the host our room numbers in our poor, poor Spanish (six y dos… no, no – no ocho… six, dos, fourtro… siete?). After we managed this hurdle, we joined Andre, our promoter Wolfgang and his wife Julia. We went right for the coffee and sipped the smooth, chocolate-y stuff as the couple talked of their private garden near Bordeaux. Great, as if I already didn’t want to visit that region, now I have to figure out how to raise the funds to move there. Anyone want to contribute to the “Help A Young Foodie Musician Relocate to the French Countryside Fund?” 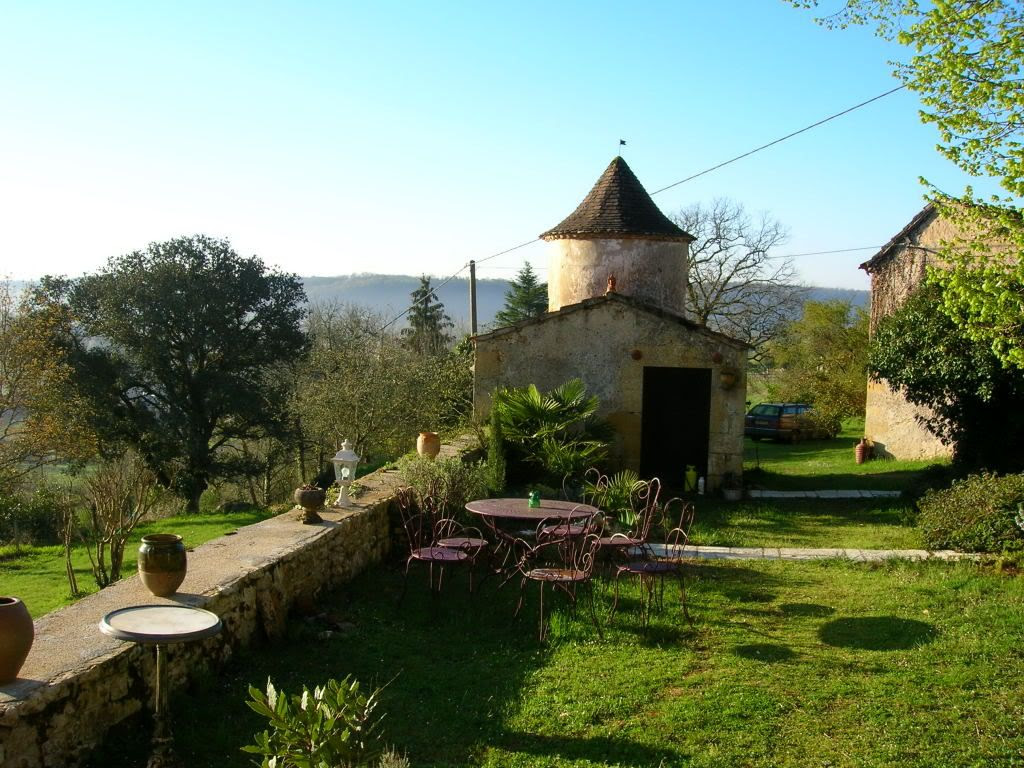 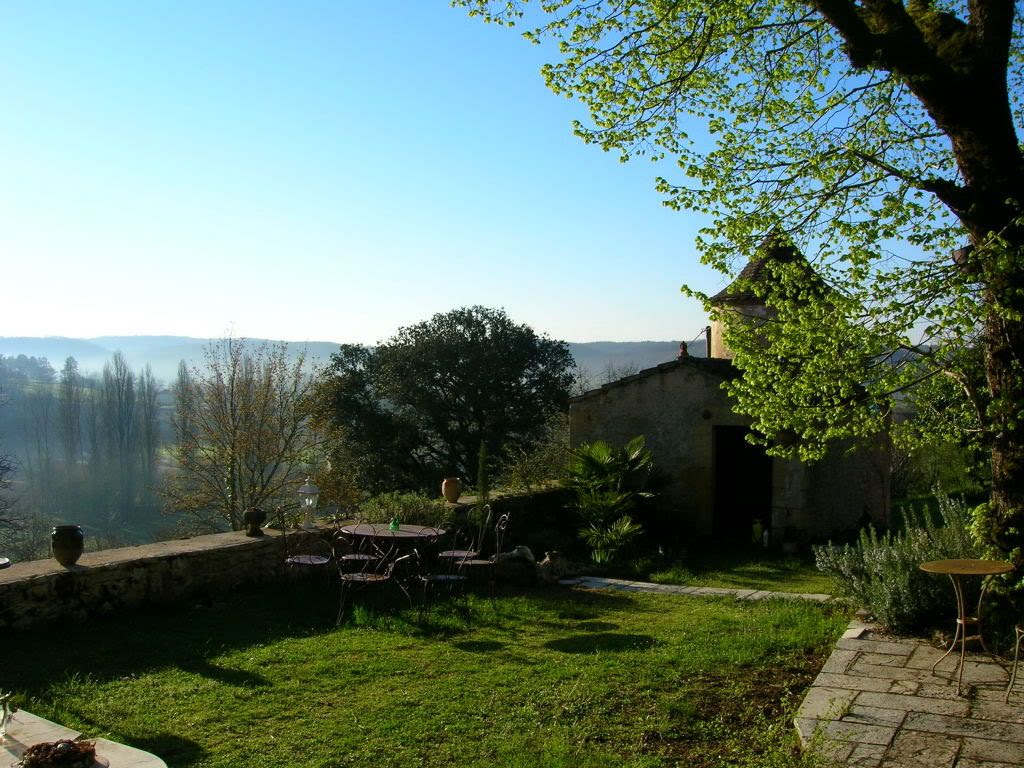 The buffet spread was incredible – fresh melon, pineapple, watermelon, grapefruit and clementines; shots (literally) of different flavors of yogurt; an entire table dedicated to donuts; a cereal station; a bread section (which featured a bowl of garlic cloves for rubbing on toast – hey mom – sounds like heaven, right?); a made-to-order omelet window; churros (Spanish tube shaped funnel cake – only my favorite form of fried confections); pitchers of freshly squeezed (for real this time) juice (papaya-kiwi, orange, guava, and apple cider); wine; and cheeses with sweet-sour quince paste. We didn’t even notice it coming in, but on the way out we broke away pieces of a model ship made entirely of CHOCOLATE. Good thing we don’t have to eat again until after the show; I’m in a food coma.
Again, it’s a show day, so the focus is on that; however, my second priority is to go to the beach. Eric and I went early to the venue, which is an awesome theater where Alfred Hitchcock used to premier his movies. After we finished setting up, we realized that we had 30 minutes to kill. We went outside and oh darn, the beach is across the street. 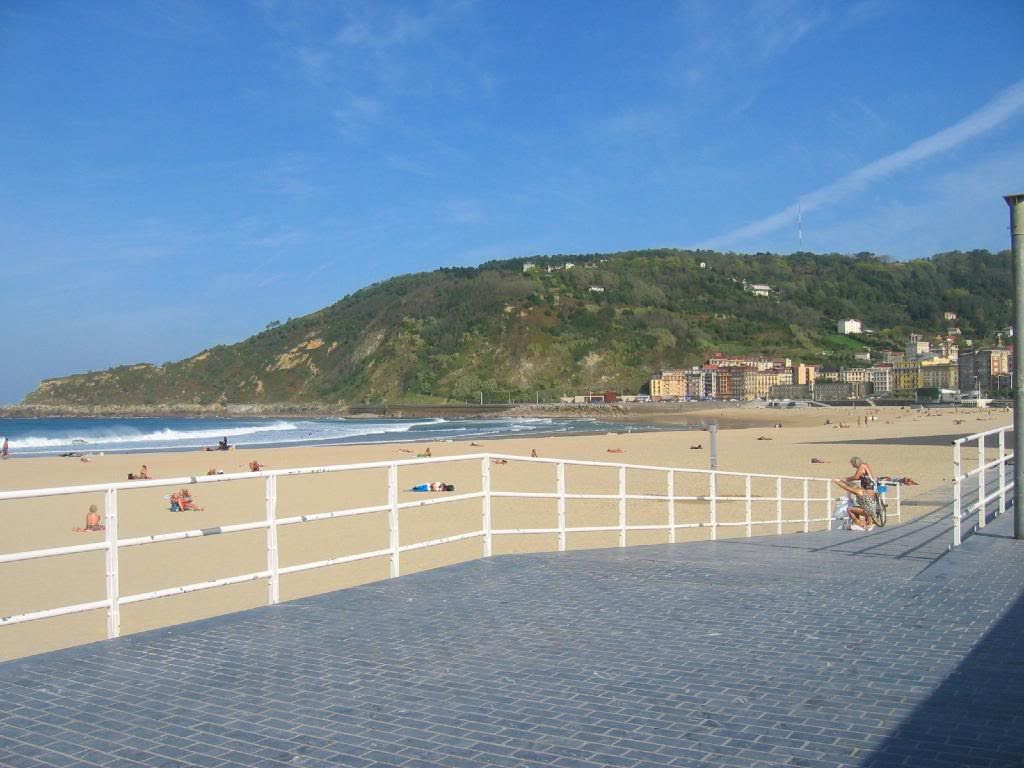 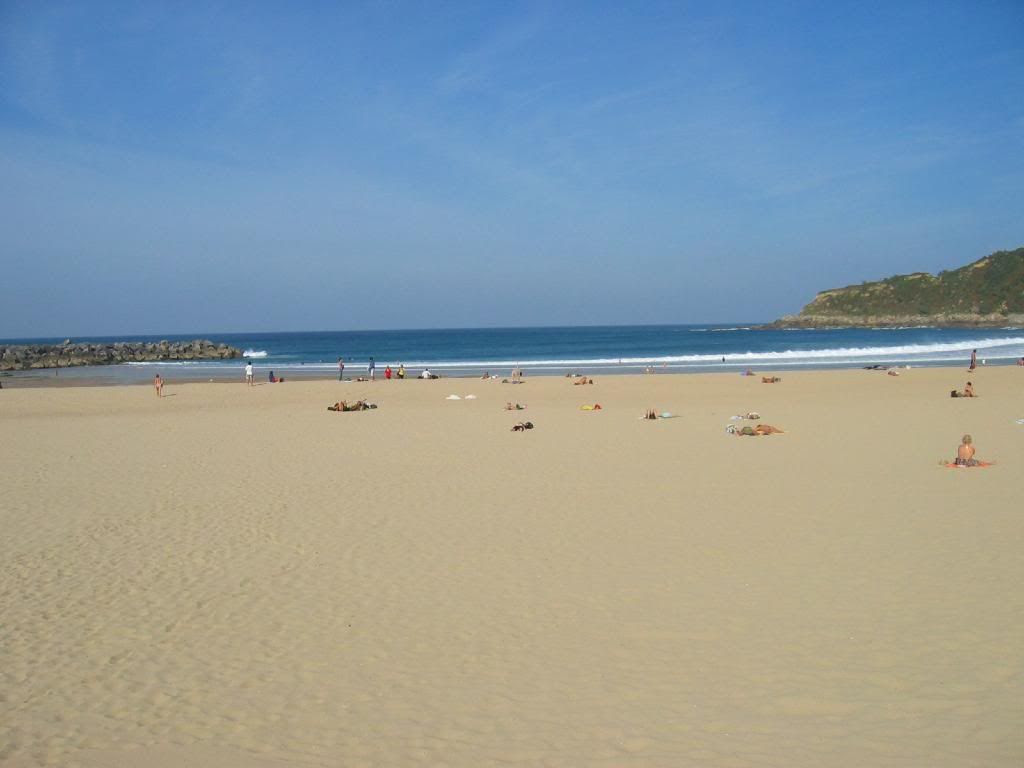 We stood at the pier and looked toward the sapphire ocean, surfers riding along perfectly cresting waves. It took me a couple of minutes of nagging, but I finally convinced Eric to tread the sands and put our feet into the lucid water. We rolled up our jeans and navigated through tanners, lying out to bathe in the midday Spanish sun. Breathing in the balmy, salty air, I thought that it would be impossible to ever leave this place. 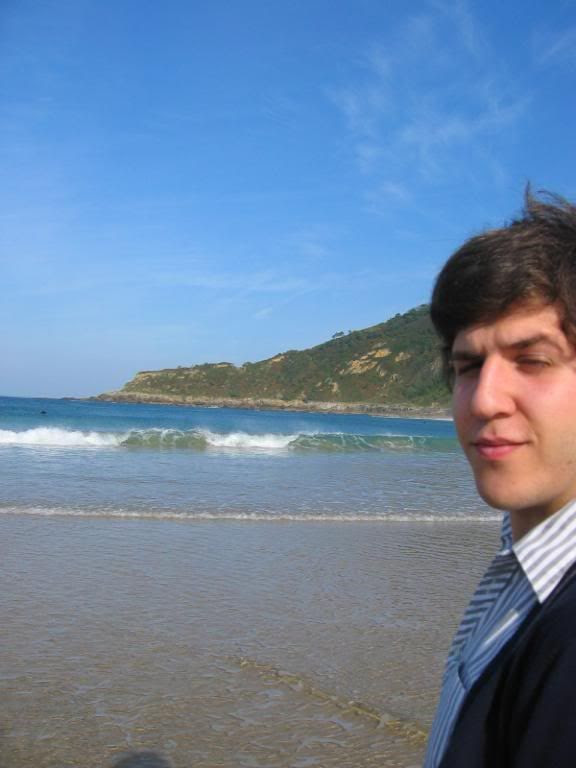 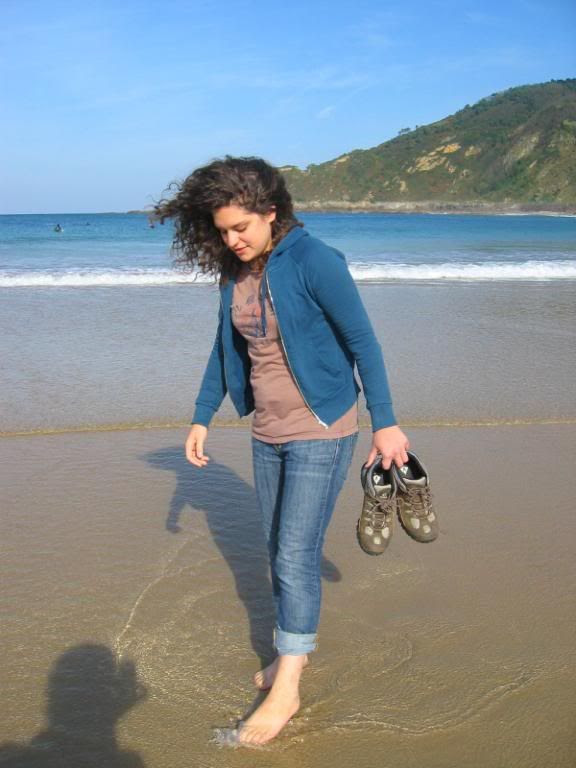 Then we saw the jogger. We were just getting to the shoreline, our eyes focused on our sinking feet. We looked up and saw him, running right toward us: his long brown hair bobbing about and blowing in the wind atop his perfectly bronzed, naked body. Let me tell you something I never thought I’d ever see (or ever want to see): a nude sprinter, flopping around freely in all of his glory. On the way back up to the pier, we noticed more and more bare beachgoers. Yes, yes, there were big-breasted women lying on their backs, sunning their melons. And there were men stretched out, with their legs apart as if to say “Yeah, that’s right. Here I am. My jamón is tan, what about yours?” I’ll admit it: Eric and I are prudish Americans. We giggled. And you’re welcome for putting those images in your head. 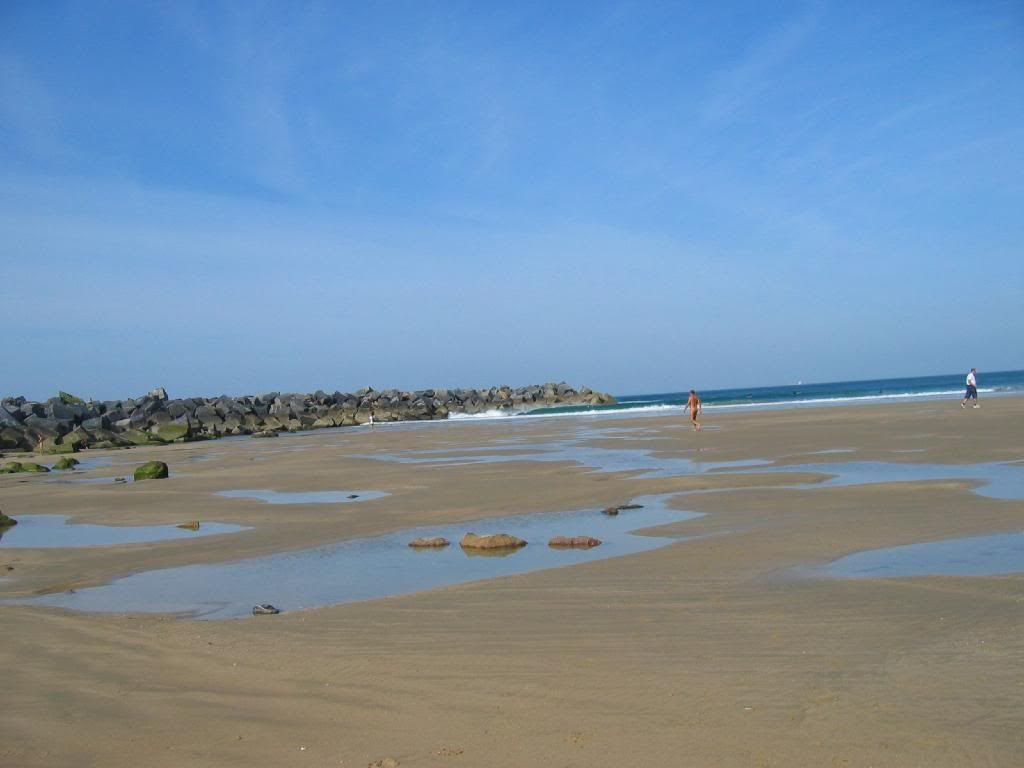 The show was acceptable – we found out that our booking agents put us in this theater because they were doing renovations on the arts center that we were supposed to play (and it had a lower capacity). This meant that the venue looked empty – but I’d try to be optimist and see the place as 1/3 full.
Afterwards we rushed back to the hotel for dinner. Without hesitation, we ordered a bottle each of Albariño and Rioja Tempranillo. 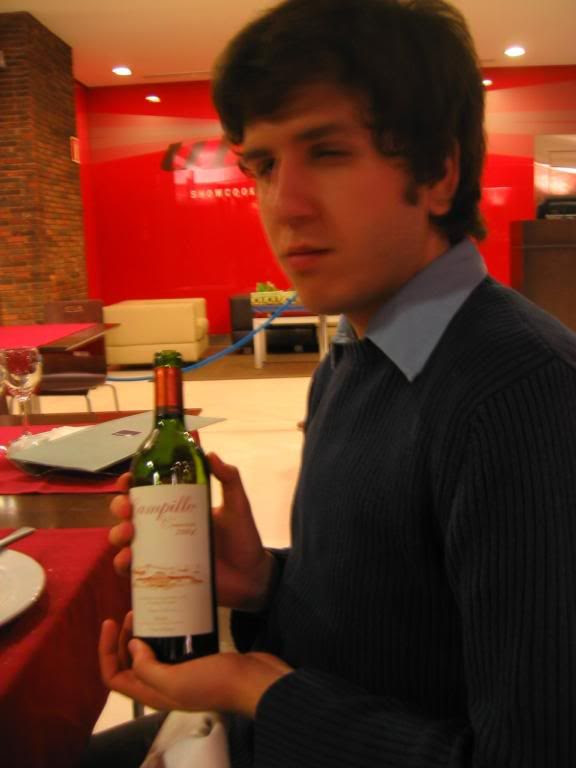 Both were a little richer than the ones we enjoyed last night – the white was little more buttery and earthy, while the red was flat out delicious, bursting with notes of blackberry and cracked pepper. I looked at the specials page – Dorado was featured – I’d had it before in Costa Rica and recalled it’s nice, mildly sweet flavor. Wolfgang and Julia ordered it with a salad starter, and I just nodded – “The same, por favor.” Eric got a bowl of vegetable soup and a salad. Adrian requested Veal, but then changed his mind after five minutes. Luckily, the kitchen let him make the switch to the fish. “In France you only order once. The chef will not give a second chance,” Julia chuckled. Just then, the first courses arrived. The salad was much like the one Eric had last night – a traditional Insalate Mixta. It was not dressed it all, which I liked because then I could add as little or as much olive oil and vinegar as I desired. 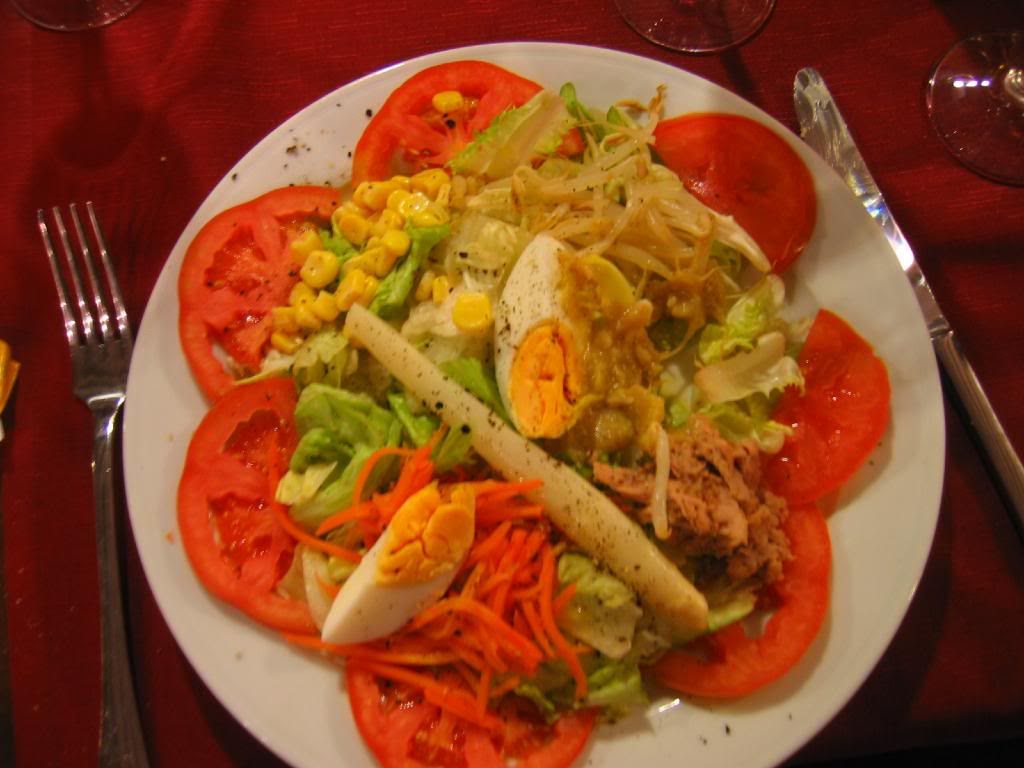 Eric's soup was pureed and topped with a bit of grated cheese. It tasted like a really good split pea (sin carne, sin jamón, of course). 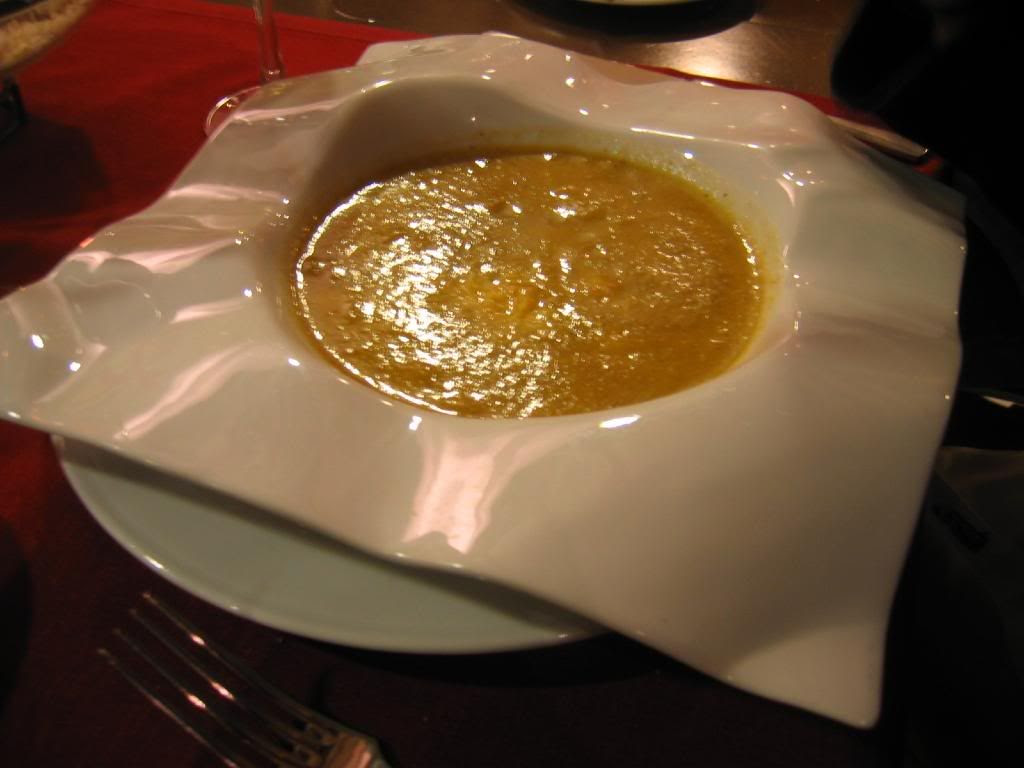 The main courses were not such a success. The Dorado looked tasty as it was brought over (yay, no face tonight), but sadly, the fillet was not the texture I expected it to be. 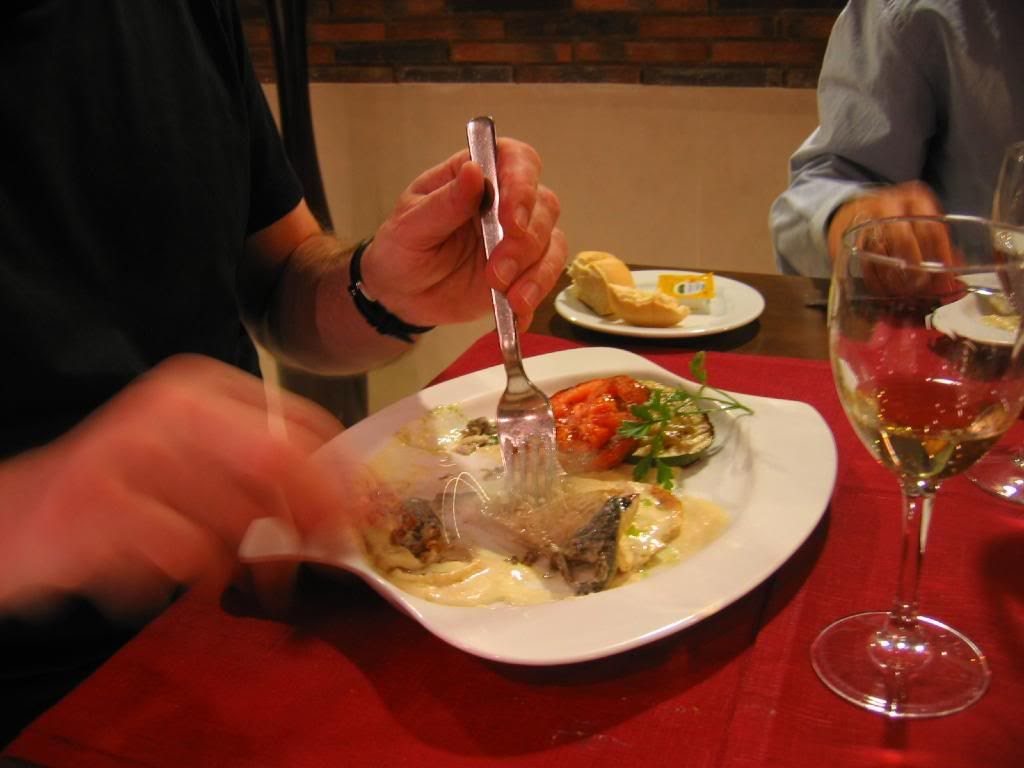 I scooped up a nice big piece for my first bite – crunch – I pushed my tongue forth to reveal tiny pin bones, which protruded out of my lips like little fangs. It was ironic – last night I was presented a whole fish, bones removed, and tonight I had I nice tidy fillet, beset with the suckers. I barely ate it – luckily the salad filled me up enough.
I stayed down in the restaurant talking until we all decided it was time for bed. My head filled with dreams of visiting Bordeaux, I slept well.
Posted by Julie at 2:09 AM

tempernillo (i proly butchered that spelling) is yum. I have yet to see a bottle out here!

i am uber jealous...the only question I have for you is, UM WHERE ARE THE PICTURES OF THE JOGGER?!?!
mwahahaha

Oh he's there... just really small (no, no not that) hahaha. It's the pic right below me.