October 17 - LUGANO, SWITZERLAND – $35 Salad and the Defeat at the Dinner Table

We had to wake up in Budapest early to catch the two-flight trek to Lugano. Luckily we didn’t drink last night so it was pretty painless. This also means that joining us for breakfast were all of the early bird Americans, who shuffled around grumpily and unsystematically as they piled their plates with over-salted eggs and crunchy sausage (or potato?) croquettes.
We left around 8 o’clock and arrived at the airport with plenty of time to squabble and bargain with Swiss Air about excess baggage and overweight charges. Our first flight to Zurich was a little rough – the plane was pretty large, but we hit some nasty winds as we made our ascent. Luckily these subsided after about 5 minutes, so I didn’t lose my breakfast. As we exited the aircraft, one attendant pushed forth a big basket from which we could select a tiny Swiss chocolate bar. Now that’s fun size! Any airline that gives you complimentary Toblerone will allow you to forgive and forget any turbulence that may have occurred during the flight. The next commuter plane was smaller, but the flight itself was pretty calm. We also received more chocolates; so again, if there was any slight instability I don’t recall it.
The descent into Lugano had to be one of the most breathtaking I’d ever experienced. I was enjoying a nice chocolate-induced coma, but awoke just in time to behold snowcapped, Alpine mountaintops peaking their way through billowy white clouds. Slowly, the mist dissipated and we were coasting over gorgeous hilly countryside and small, crystal blue lakes. We crossed over a big river and the pilot announced that we’d be landing in 10 minutes. In this time, I realized why so many people had told me about Lugano’s status as a paradise. Pricey white speedboats cut through the gorgeous cerulean waters that encircle the land supporting tree-topped mountains whose emerald leaves (at this time of year) were stained various shades of sepia, scarlet, blonde and burgundy. I was so captivated and hungry that I forgot to snap some photos! Here's some from the next day (which was overcast) - it still captures the essence of the place. 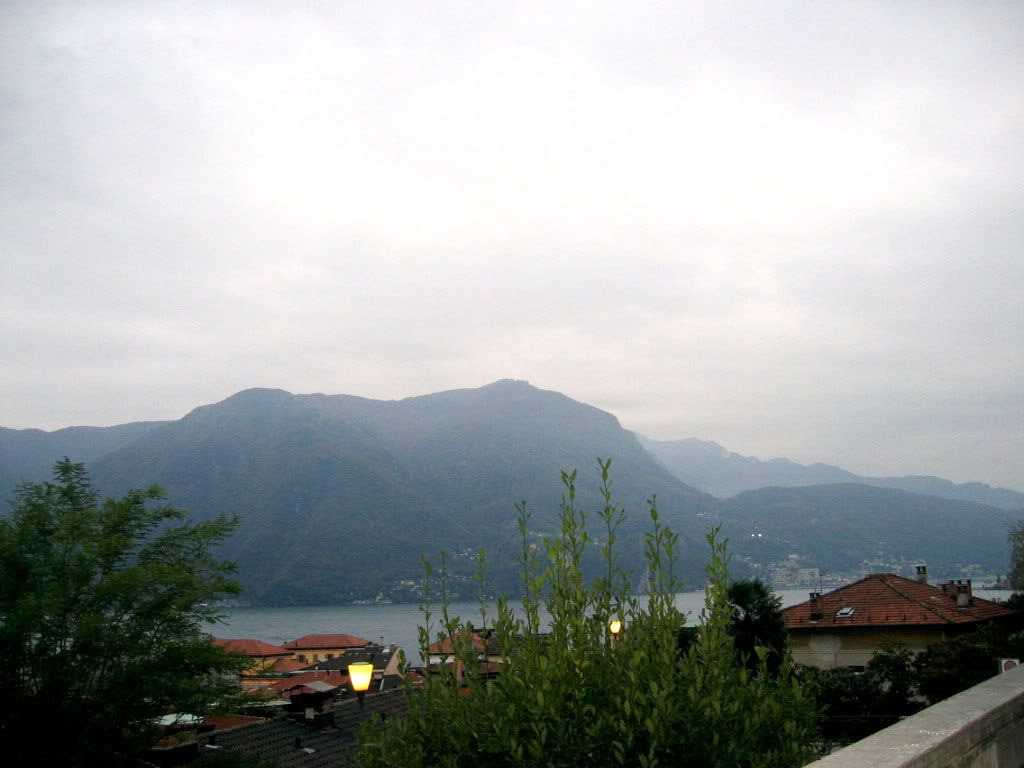 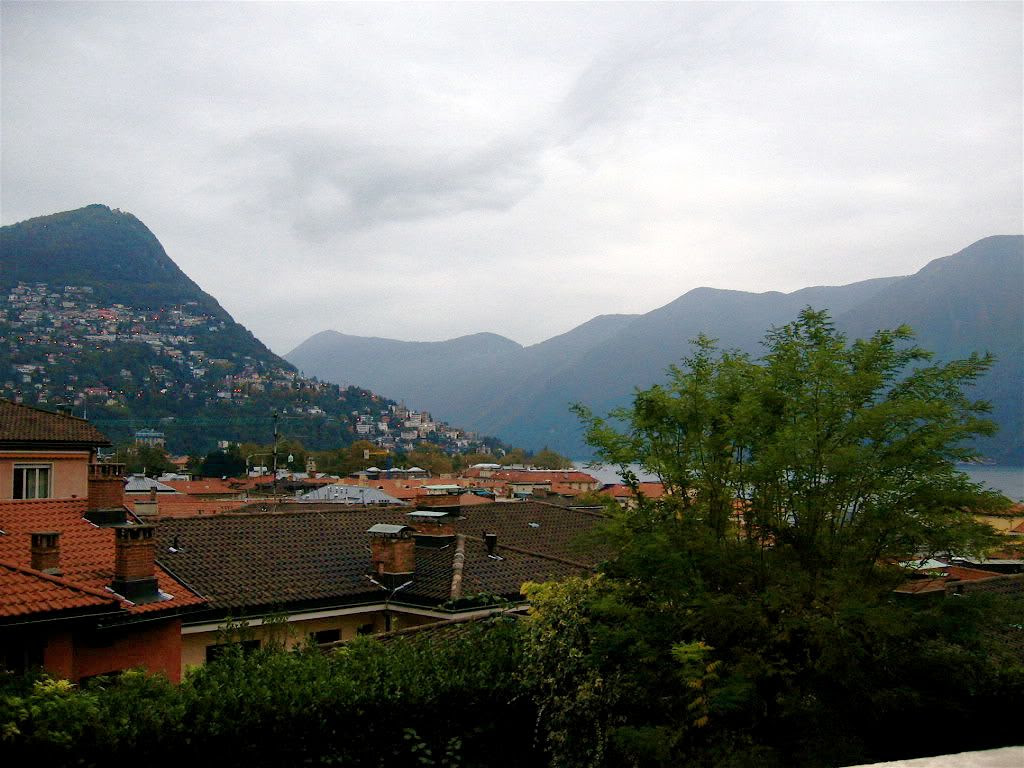 Of course the weather outside was just as perfect as one would imagine: 70 degrees and sunny with a slightly warm breeze. It was gorgeous, yes, but we were immediately consumed with the subject of where to eat – it was 2:30 and we were starving. Knowing we had to be back by 4:15 for an interview and rehearsal, we hastily checked into the hotel and met downstairs to begin our quest. Walking down the steep cobble-stoned hill into the downtown area, we soon discovered that the entire town speaks Italian, and the food is a reflection of that. The smells that waft through the temperate air are amazing, and we were so empty and mesmerized that we settled on practically the first open-air cantinone that we saw (besides – we were aware of the rough time we’d have making the climb back to our rooms). The menu was large and I was too hungry to focus, but noticing an additional page of specials, including an entire sheet dedicated to mushrooms, I went for the Insalata di Funghi over rucola (which I had to specify). A bread basket was promptly brought to the table, although we had to wait a painstaking 5 minutes for dipping accoutrements. It was worth the wait: the extra virgin olive oil was wonderfully cloudy and full of grassy, buttery flavor. We didn’t even bother dipping – plates weren’t brought in enough time. We simply doused the delicious stuff over torn rolls, allowing them to sop up more of the briny goodness. The waitstaff probably had to hold back laughter, watching us savage Americans drip oil all down our hands and over the table. Luckily the meal arrived quickly, before we devoured the whole basket. My salad was gorgeous – a bed of peppery baby arugala topped with thinly sliced raw, freshly foraged Porcinis, shaved Parmigiano Reggiano, more extra virgin olive oil and fresh lemon rounds. I covered it with fresh cracked pepper (why don’t all American restaurants put peppermills on tables?) and made quick haste of my lunch. Andre managed to capture a shot before my plate was licked clean: 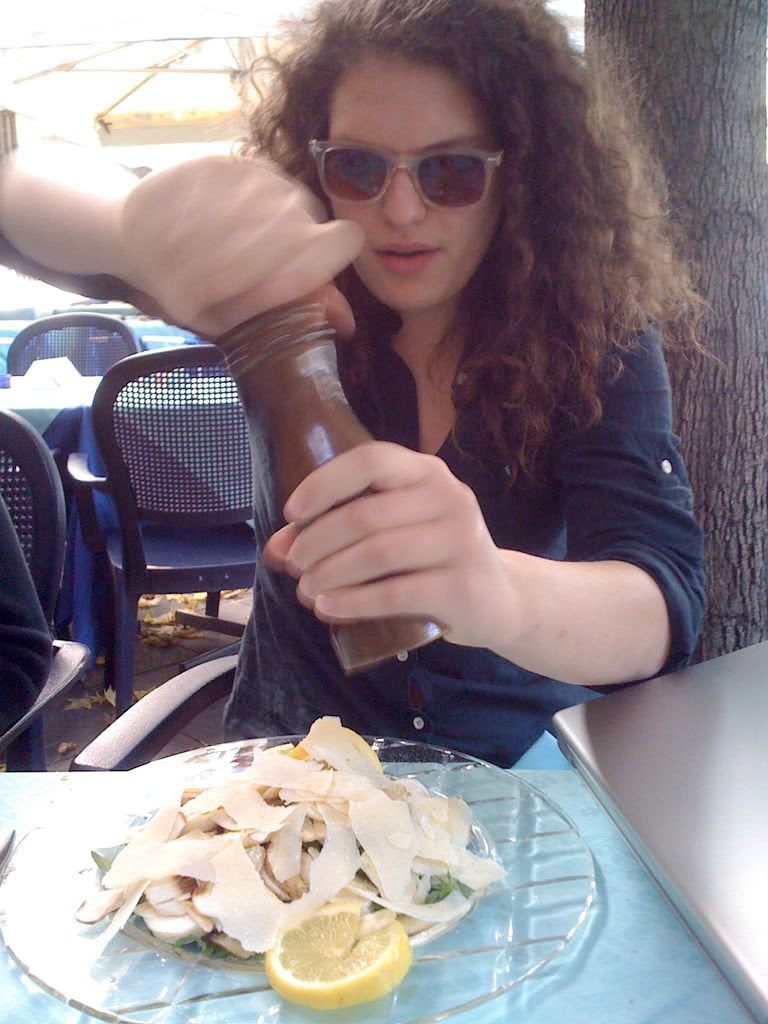 Delicious! Eric ordered a Caprese salad, which featured some of the most velvety, flavorful mozzarella di bufala we’d ever tasted. Andre got a simple but delicious rucola salad with diced juicy tomatoes and olives and Adrian had a bowl of Spaghetti al'olio. It was the only (somewhat) clunker at the table – he deemed it under seasoned and uninspired, claiming his version was spicier and therefore superior. It was acceptable enough, though, as this actually made him beam with pride – but we agreed that the next time he should order some pasta of the fresh variety. When the bill came we had to explain that we only had Euros – which was fine – but it was difficult to figure out who owed what and if we should leave a tip. This has been the toughest thing for me dining in other countries – I always forget to look up or ask about tipping policy. Fortunately, I had my laptop out and connected to the internet, so I quickly googled for my answer. Apparently tipping isn’t customary or expected, but as a server, I always feel nervous doing this to my fellow brethren. We left extra anyway, and I alone threw down 20 Euros, meaning my mushroom salad cost me $35. Oh well, I hardly spent anything in Budapest.
We made it back with just enough time to hop in the van and go to the studios. Adrian enjoyed his brief radio interview and the rehearsal went pretty well. We really just wanted to make sure that Ade’s amp worked, which it did, so we were grateful. Paolo left us to our own devices, so we had to walk a supposed 700 meters back to the hotel. Luckily it was downhill, but the journey felt longer – probably because I still can’t comprehend metric conversion, even if it does make more sense. It was a good hike though, and it cause us to muster up more of an appetite. Andre stayed back to wait for his sister, who was coming from London by train (I know, I’m jealous too). So Eric, Adrian, and I skipped down to the main square in search of a decent dinner. There are quite a few cantinone, so we had to set a few criteria: fresh tagliatelle, preferably without meat, some healthy vegetarian fare, and a nice atmosphere. As you’d imagine many places met these standards, so we tried to find one with a good amount of customers. We found Ristorante Commercianti, whose menu was similar to the one we had at lunch, but a bit easier on the wallet. Again, I forgot to the bring the camera (hey - I'm new to the blog thing), so I snapped this the next day (but missed out on the food porn shots): 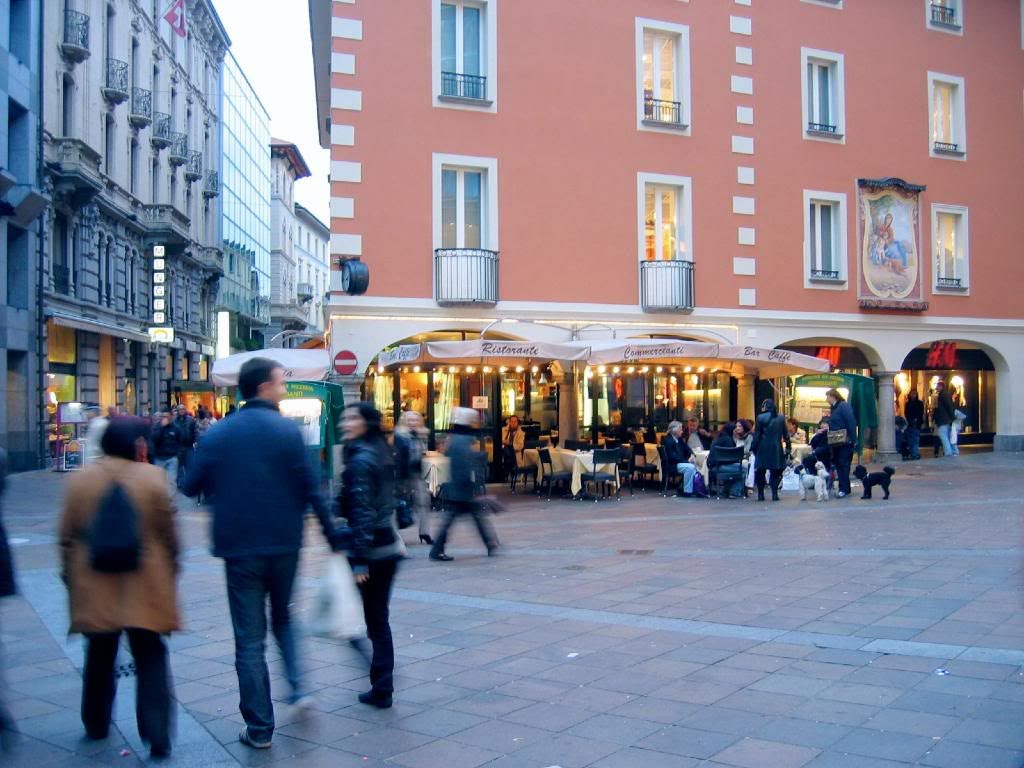 Adrian had exactly what he required: fresh tagliatelle with buttery sautéed meaty porcini mushrooms. Eric and I both got the ambiguous vegetable plate that (we discovered upon arrival) consisted of steamed broccoli, cauliflower, julienned carrots, fennel wedges, and (our favorite) chopped spinach. Again, I saturated my plate with cracked pepper and olive oil. After the meal, Adrian treated us to shots of Limoncello, which were above average – syrupy sweet, lemon pledge-y goodness. Feeling nice and fuzzy on the inside, we stumbled into Andre and his sister, Lisa. From there our motley crew walked further into town so we could have a drink while they dined. A few paces later and – d’oh!!! – we had totally missed on the happening part of the area! We were dumped into a main square, surrounded by restaurants and breathing in noxious aromas of wood oven pizza and fresh bread. Not even looking at a menu, we entered the place that was the most populated (with diners speaking Italian). It was called Argentino and naturally the menu showcased Italian cuisine. Lisa had a simple marinara pizza, deliciously redolent with minced garlic. Andre had a steaming, hearty bowl of Minestrone soup, which was chock-full of chunky vegetables. We were jealous: watching boards of rustic, thin crust pizza and heaping bowls of creamy, egg-y pasta traverse the heated patio, finding homes under the noses and in the mouths of eager, wide-eyed patrons. Adrian frowned as he sipped his Limoncello; I cried in my cup of Lipton green tea; Eric couldn’t bring himself to get anything. We didn’t even stay long enough for Andre to finish his soup. We just couldn’t take it. At least the walk back up wasn’t too bad – we spent the time justifying our own dinner, but we admit – we had been defeated. Tomorrow seems more promising – Adrian wants to return to the new place for lunch to try yet another pasta dish. The show is the priority, though, so any good meals tomorrow will be surely be unfussy and secondary.
Posted by Julie at 12:00 PM

arg.
im so jealous, lugano is at the top of my list o' places to visit.