The breakfast here is similar to the one in Budapest, with the exception of eggs and boisterous Americans. There is also table service and half of the items at the buffet are bread or pastry related (and probably contain loads of butter). Not wanting to eat to heavily on a show day, I had my typical bowl of yogurt and cereal drizzled with a bit of raw honey. I will say that yogurt was more lush and creamy here – my guess is that it was of the full-fat variety. The coffee was robust and French pressed, served in a nice single-serving heavy sterling silver carafe with a side of steamed milk. Not a bad way to start the day!
Apparently the caffeine took a while to hit my bloodstream, because it took me 20 minutes to figure out how to work the shower. After I solved the puzzle (turn the handle left or right, idiot), I met up with Eric to check out more of the town. It would figure that it was dreary outside – I forgot to take photos of the sun-drenched scenic town the day before. No matter; we sauntered down to the river, went in a couple shops and still took some nice photos. 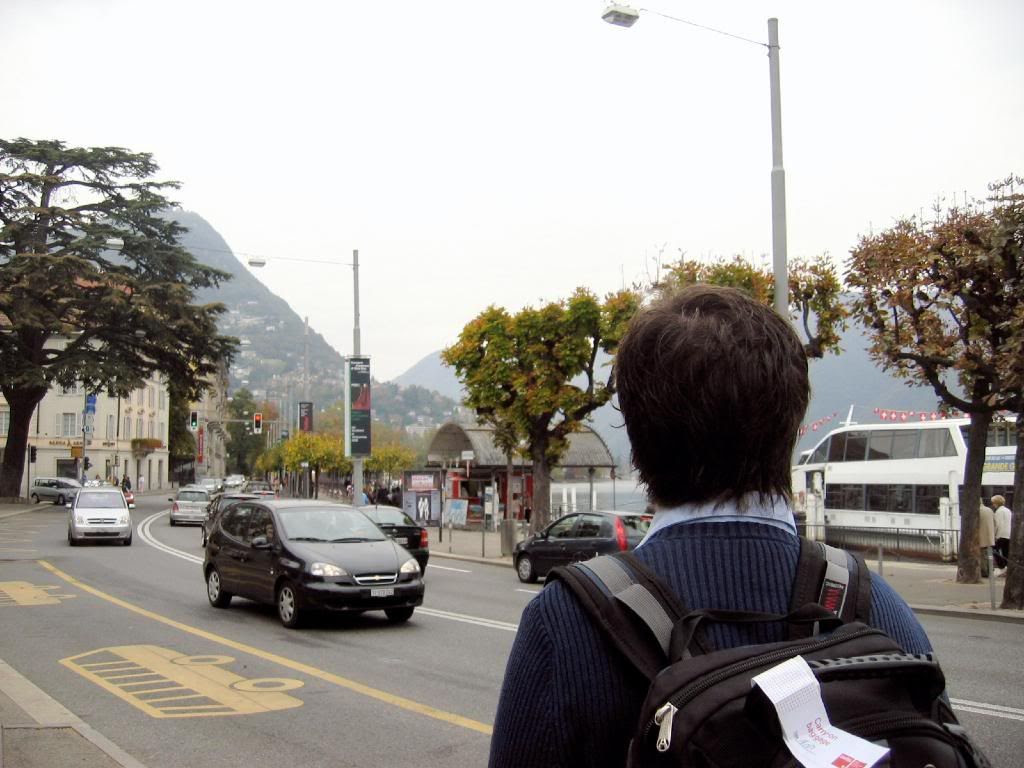 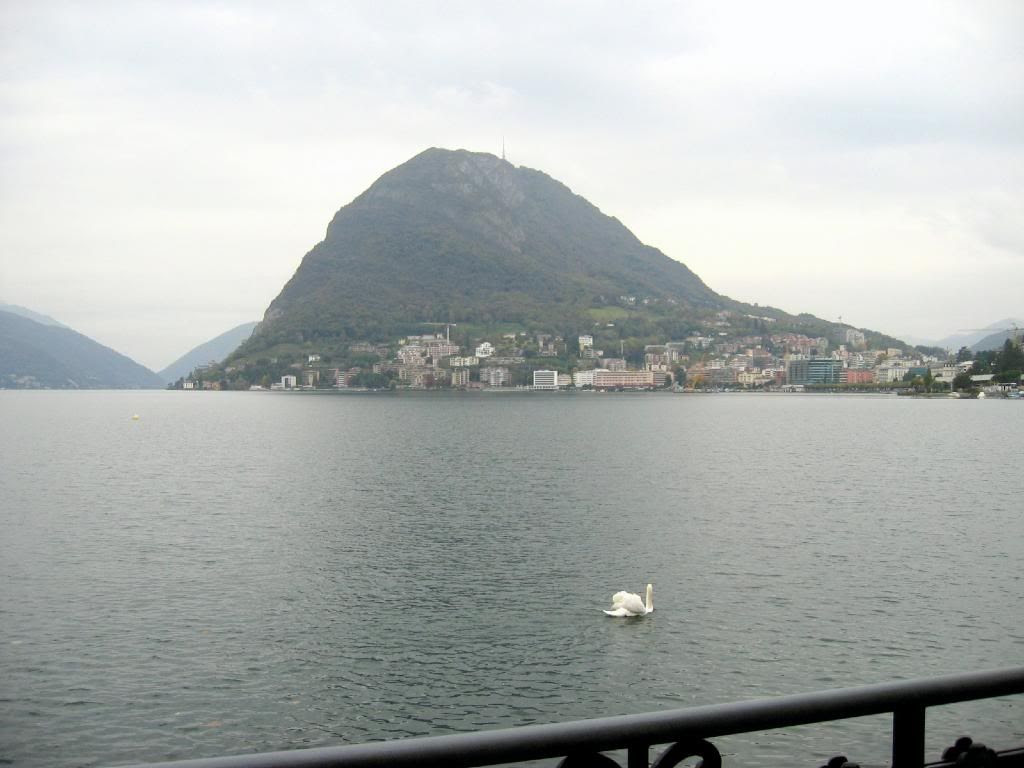 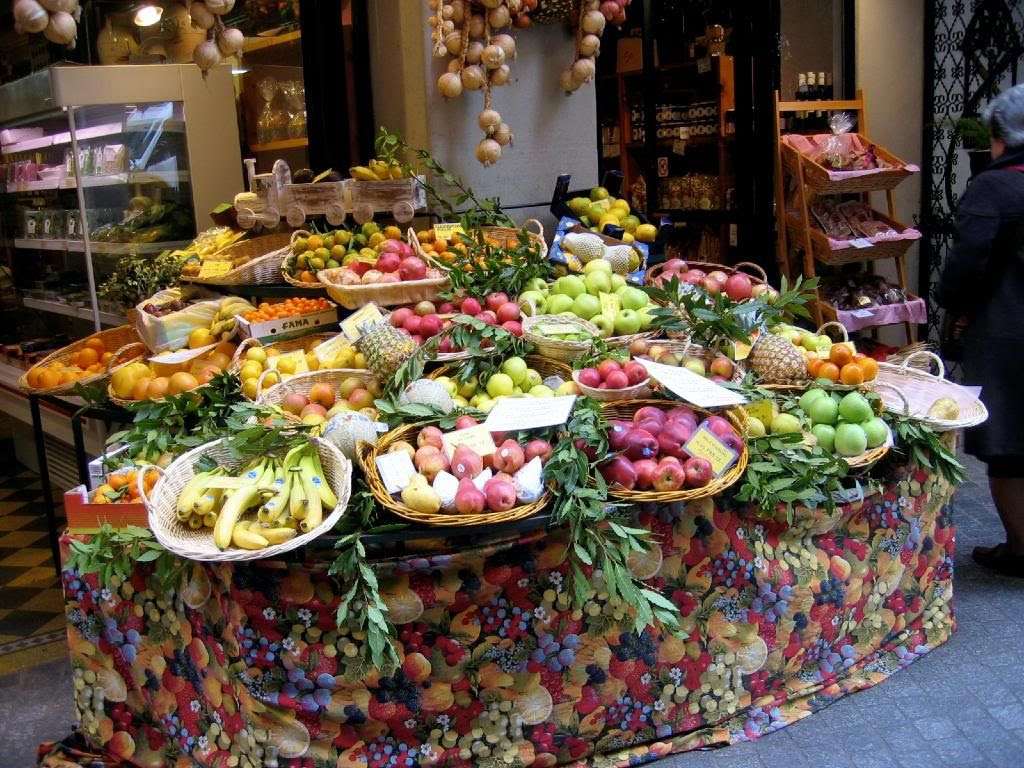 The town square was definitely bustling despite the dull and clammy Saturday. Entertainent was even included – there was a clown on a stilts and a quintet happily singing and strumming what seemed to be traditional Italian folk songs. 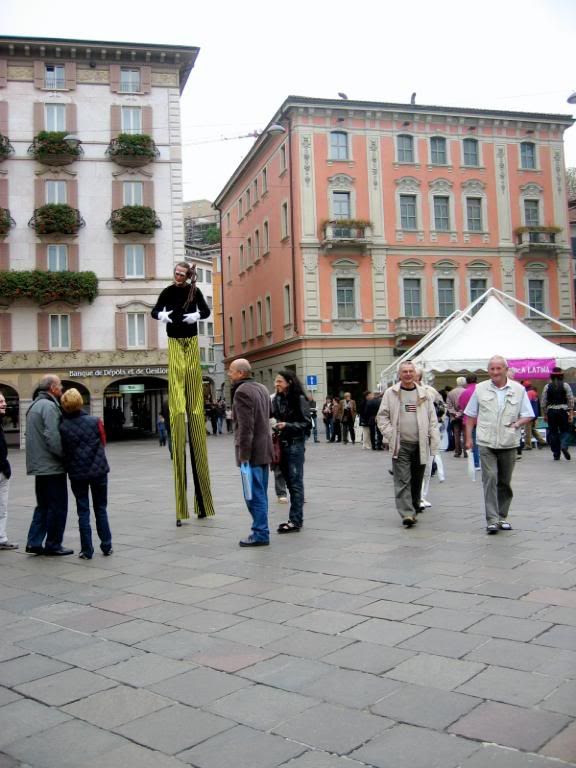 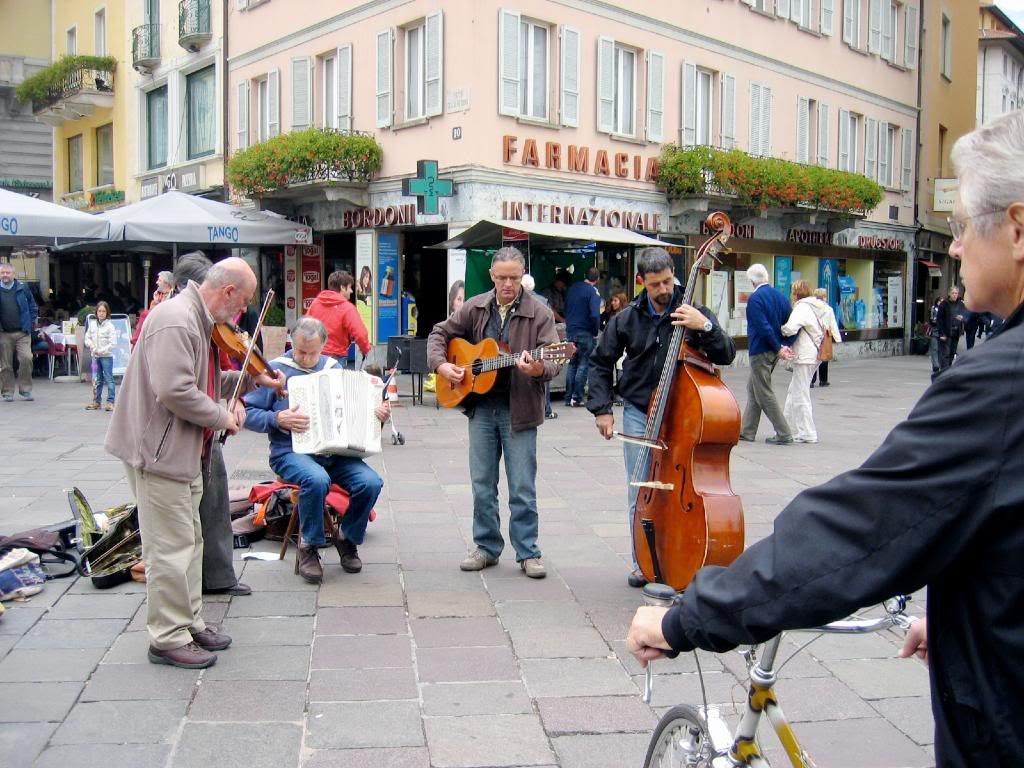 Soon enough we realized our bellies were rumbling, so we stopped at a vendor who was selling pastries and sandwiches on artesian breads. Eric got a Caprese (he couldn’t resist after yesterdays yummy salad). I got a grilled vegetable panino on ciabatta. The sandwich was handed to me wrapped in wax paper, still warm from the grill. He burnt the bottom a bit – which I loved – but the medley of eggplant, zucchini, baby carrot, onion, and sweet bell pepper was still slightly cool enough to offset the heat of the bread. Amazing. 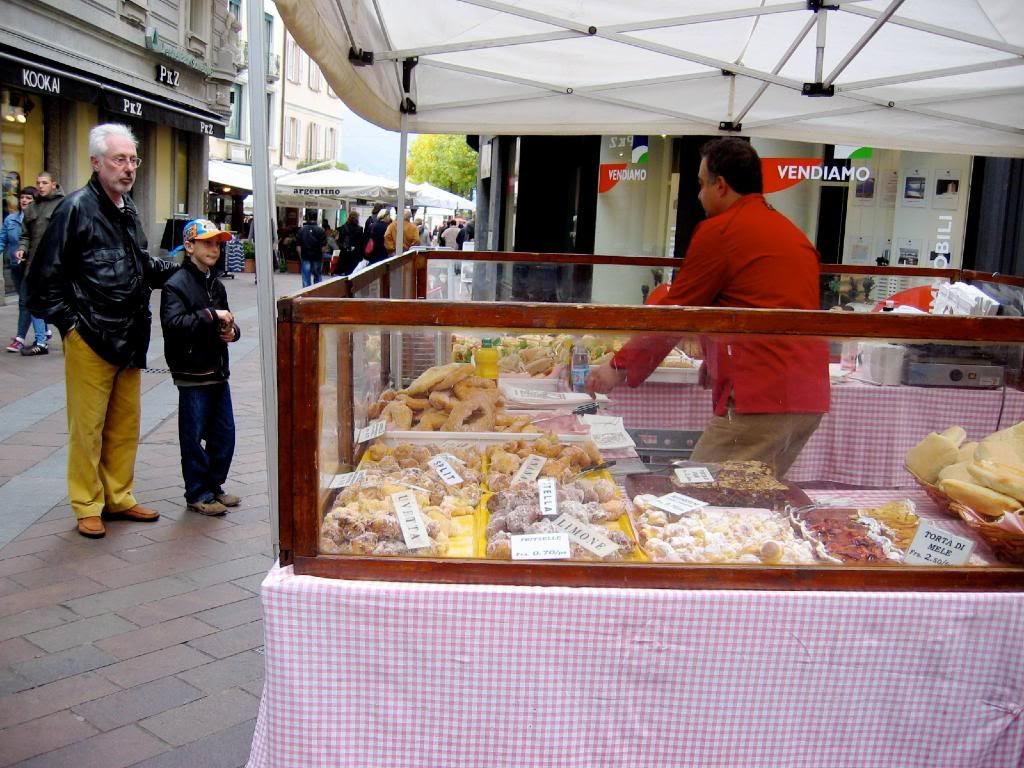 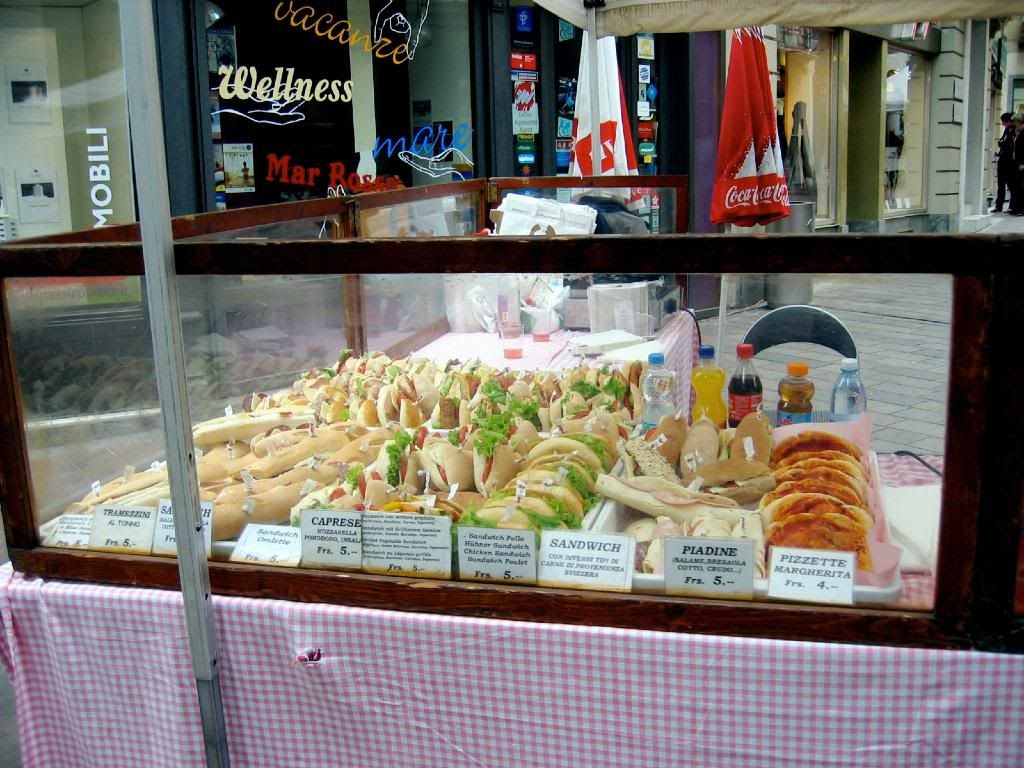 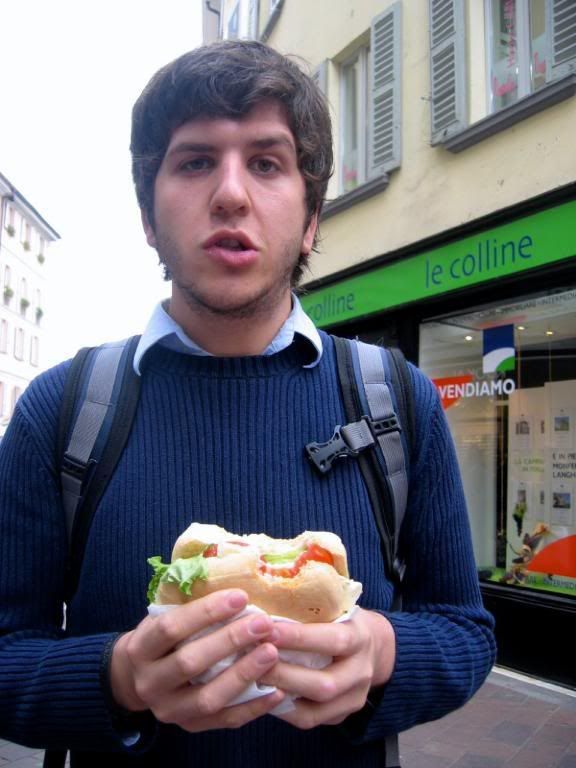 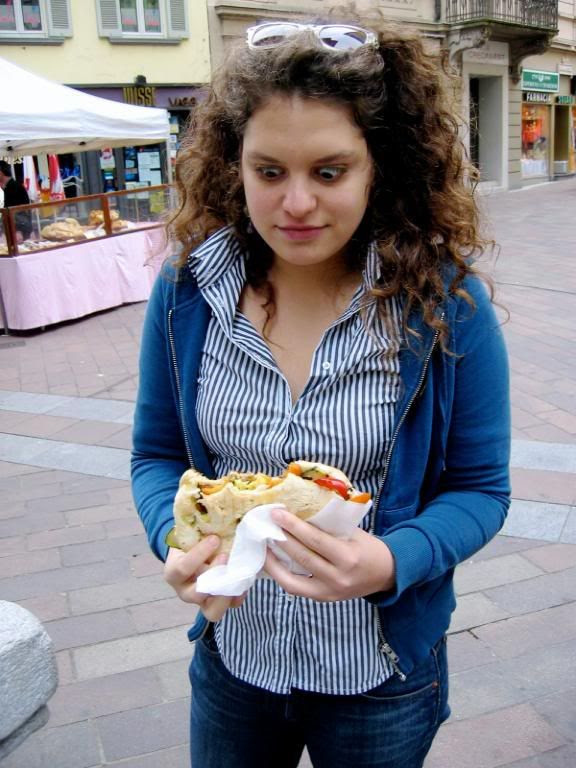 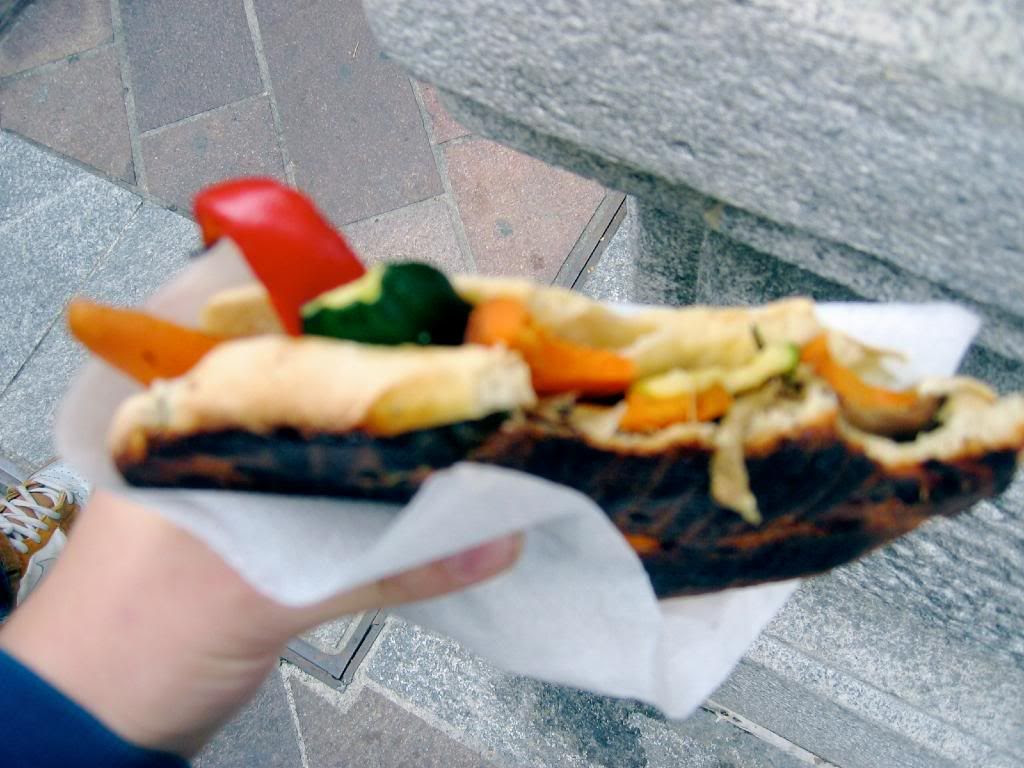 By the time we made it back up the hill it was time for Eric to leave for the venue to set up his drums with Andre. I stayed back and left with Adrian an hour later. We sound-checked, playing a little quieter than usual for fear that we might blow out the eardrums of our audience. See, we’re playing in an auditorium at the radio station, where an orchestra performed last night. 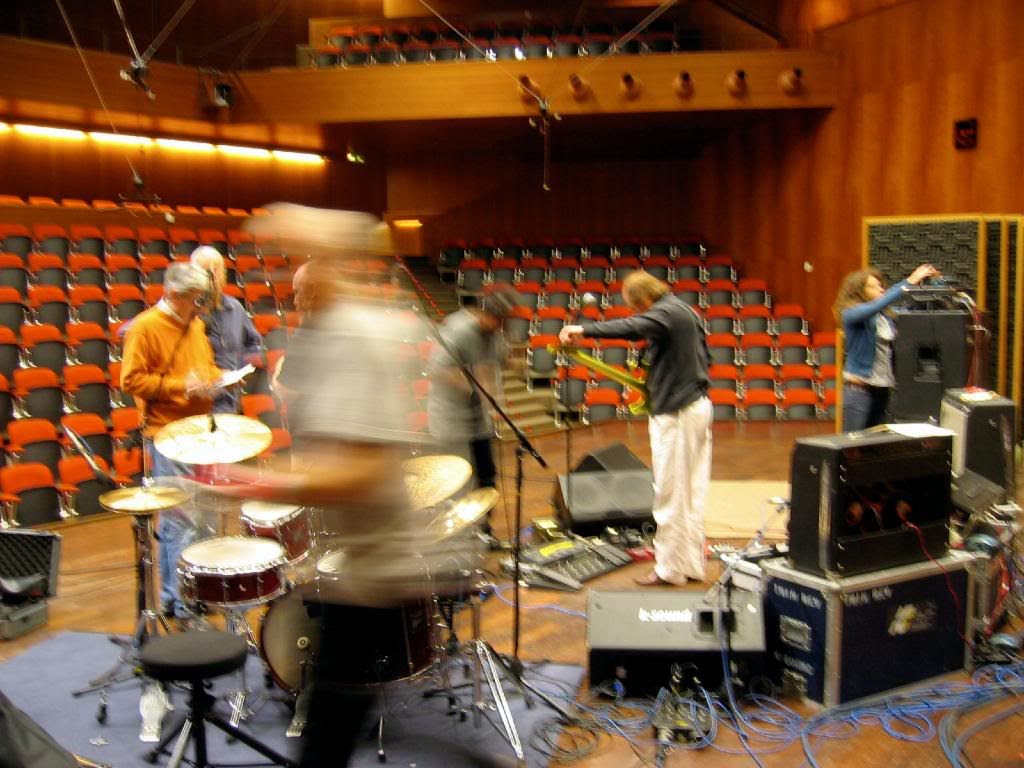 Some cool jazz guys are playing there soon as well… not exactly a place where we can really be a POWER trio. It reminded of the time we played at the Villa Montalvo, a theater situated in a very ritzy section in Saratoga, California. We were part of a concert series there, which usually features tamer acts (think classical or new age). Older, wealthy residents subscribed to the series and enjoyed this soft, pleasant music weekly. So basically we weren’t really performing for Adrian Belew fans, but rather a retirement community. It was simultaneously disappointing and hilarious to watch the majority of the crowd squeal with horror as we started our first song. They ran for the doors, pressing against their ears so hard I thought they’d surely pop some blood vessels. I find it really comical that our most viewed clip on Youtube is from this show … we probably had 20 people left in the audience by the time that was filmed. Anyway, we didn’t want a repeat performance of this, so we turned down as much as possible…
After we got our sounds dialed in, we raced down to the hotel to drop off our stuff and get something to eat. We knew where we’d be eating tonight – Argentino. We sat down inside (there was too much cigar smoke in the heated outdoor patio) and Adrian requested that I take a picture of him Italy. “Sure,” I snickered, “but you’ll hafta remind me – we’ll be there on Wednesday.” I’ll confess it was confusing – I had to keep reminding myself that we were, in fact, in Switzerland. 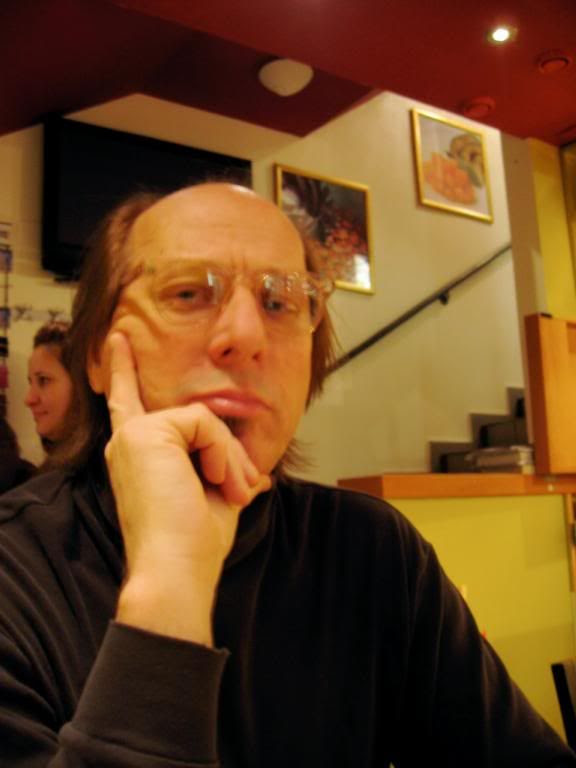 Soon after the photo was taken, dinner arrived. Adrian got a plate of (you guessed it) tagliatelle, but this time, it was al pommodoro. He deemed it the best of the pastas he’d had so far in Lugano. 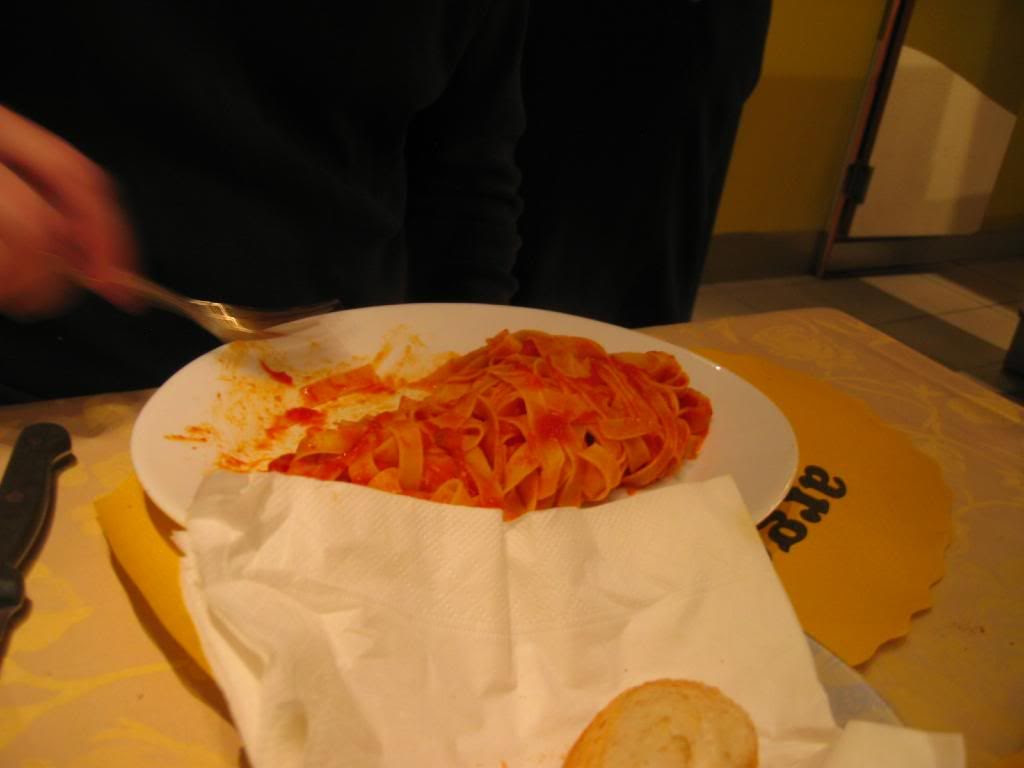 We were amused (and tempted) by the Pizza Yankee, which was topped with french fries and ketchup. 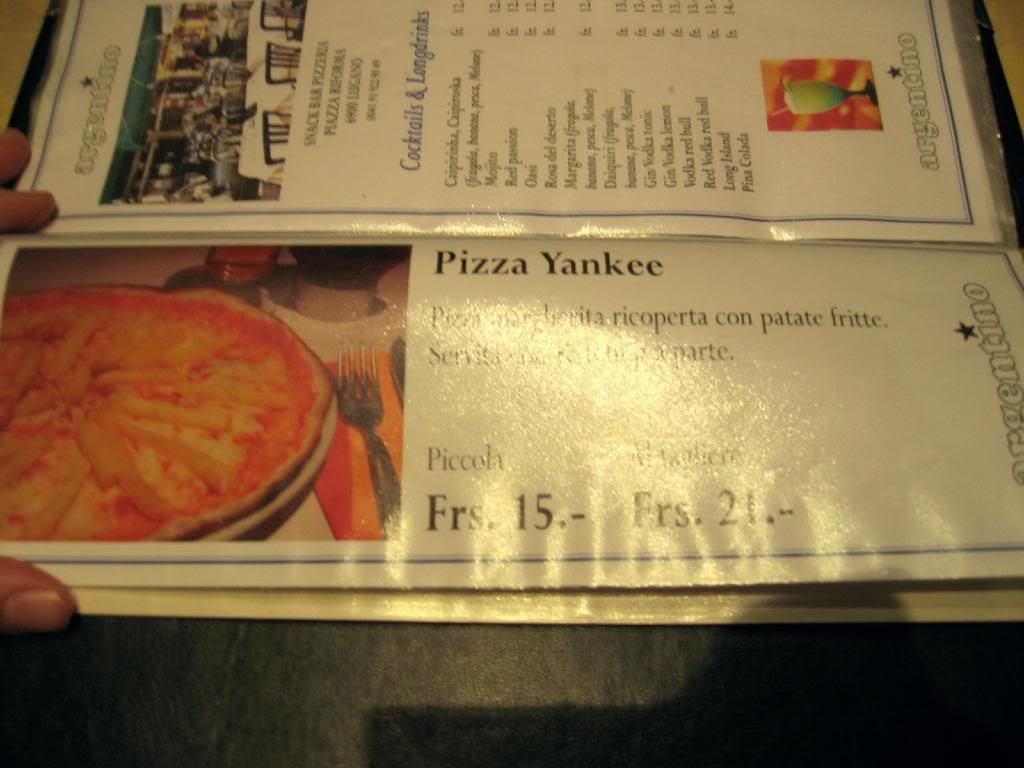 Eric got a vegetarian pizza, which was topped with spinach, green beans, onions, zucchini, and mushrooms. Of course I had a bite. Of course it was delicious – the crust was crackly, the sauce sweet, and the cheese mild and gooey. The vegetables definitely seemed like an afterthought, merely there for nutritional value – over-boiled, but still good, whatever. 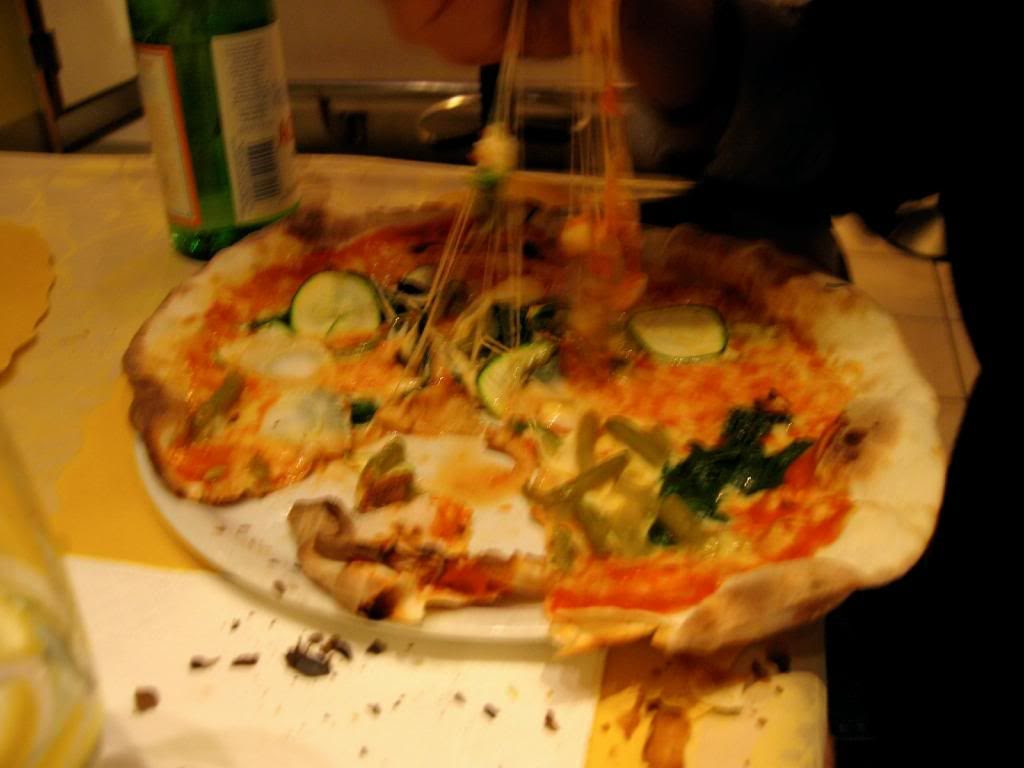 Seeing as how there was nothing interesting beyond pizza for vegetarians on the menu, I got an Insalata Vegetariana (aren’t most salads vegetarian?) Again it was without description, but I just went with it, asking for some rucola in case it didn’t normally accompany the dish. 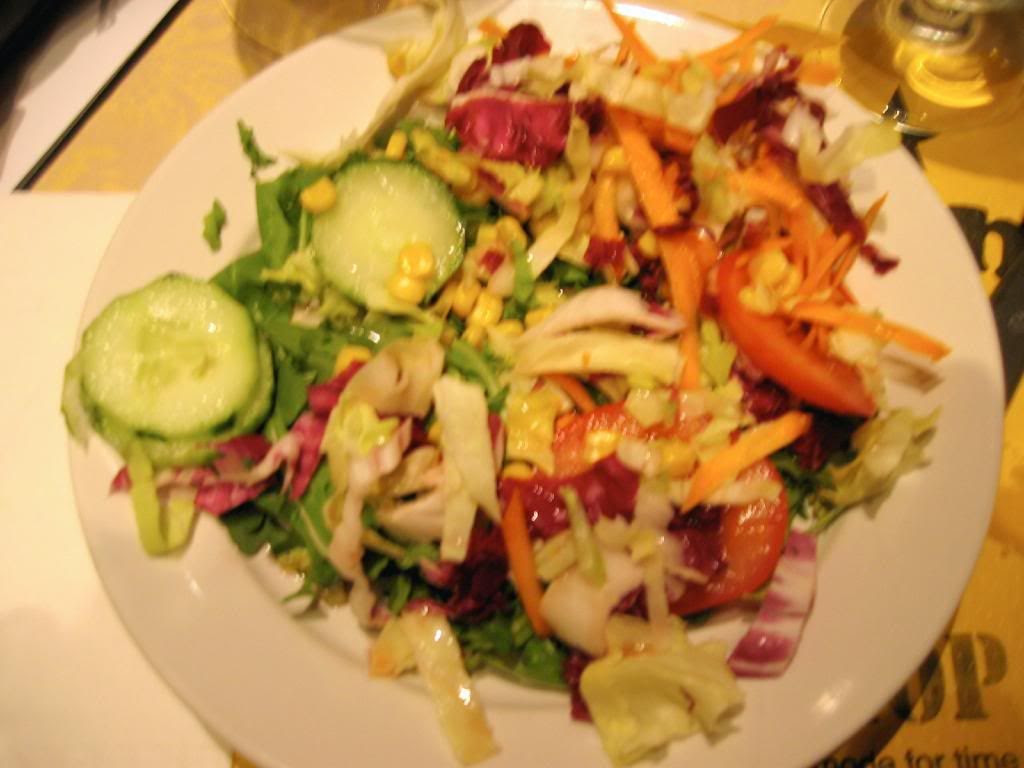