Andras met us downstairs at noon today to take us on a walking/shopping tour of Budapest. In case you didn’t know (we didn’t) Budapest is divided into two sections: Buda (the hill on one side of the Danube) and Pest (the flat part on the other side). We stayed in Pest first to look for some music stores – vinyls are cheap and abundant, so we had hopes to pick up some classical and jazz LPs. A young pony-tailed man who came to the show conveniently works at a nearby shop, and he wrote down the address for us last night. As we walked there, Andras asked for our forgiveness as the whole city is clearly under construction – it just reminded me of being home in Philly! 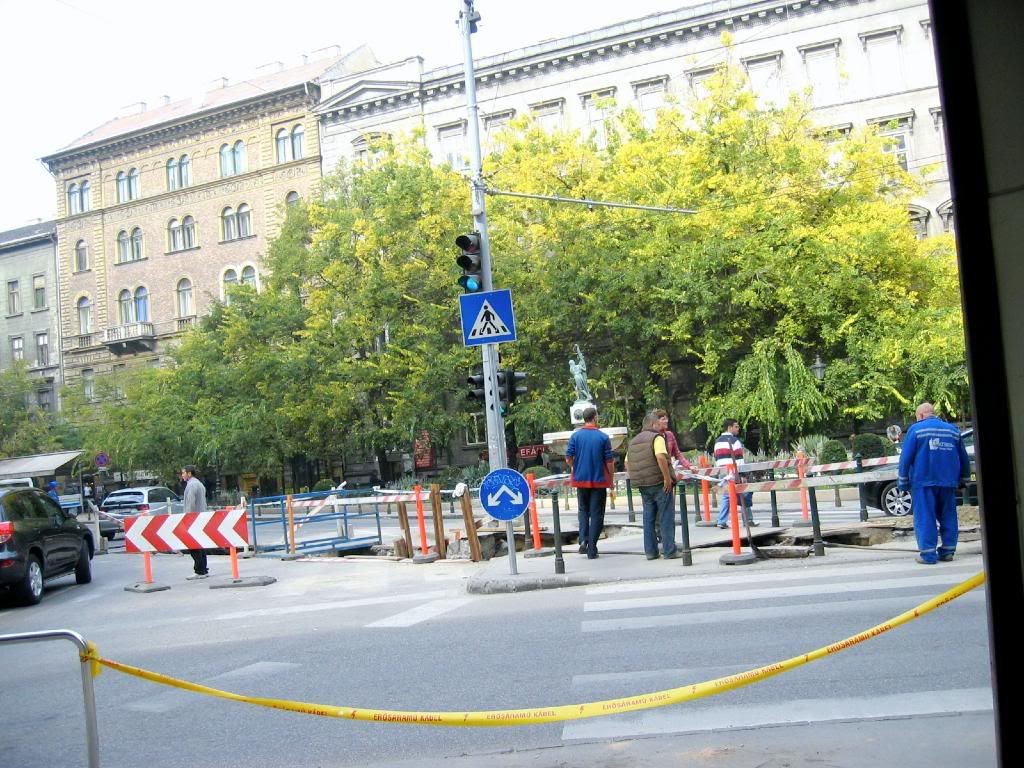 Avoiding potholes and hopping over broken sidewalks, we made it to the store. We wandered to the back, where we found our fan, who looked completely bowled over – I guess he didn’t think we’d actually take him up on his offer! We scored some sweet LPs – a couple Bartoks (including a box set), a Pergolesi, and a rare jazz CD that features some traditional Hungarian folk rhythms. Our total was something around $40 – and the CD alone was $20. Nothing like some cheap, unusual vinyls you can’t find at home! We just have to make sure we don’t wreck them over the next couple weeks as we drag them around with us.
All of the album shopping and construction dodging worked up an appetite in us so we let Andras lead the way to some lunch. It wasn’t easy as not many places were vegetarian friendly. “No vegetable here. Meat sandwich only. Salad not ready,” was repeated by many café owners… I guess they had to wait for the lettuce to grow. We finally found a sandwich shop that had a couple veg options. Eric got a Caprese, which he was a little disappointed with: the mozzarella was not of the fresh variety and neither was the basil. The thin, crusty baguette was excellent, however. Andras and I both got an Avocado, Lettuce and Tomato sandwich on a slightly sweet and nutty wheat baguette. The avocado was perfectly ripe, and slightly firm but slightly mashed. All of the sandwiches came slathered with mustard and mayo. I was tricked into getting a large, which ended up being quite big. But as it turned out, I’d be needing the extra calories. 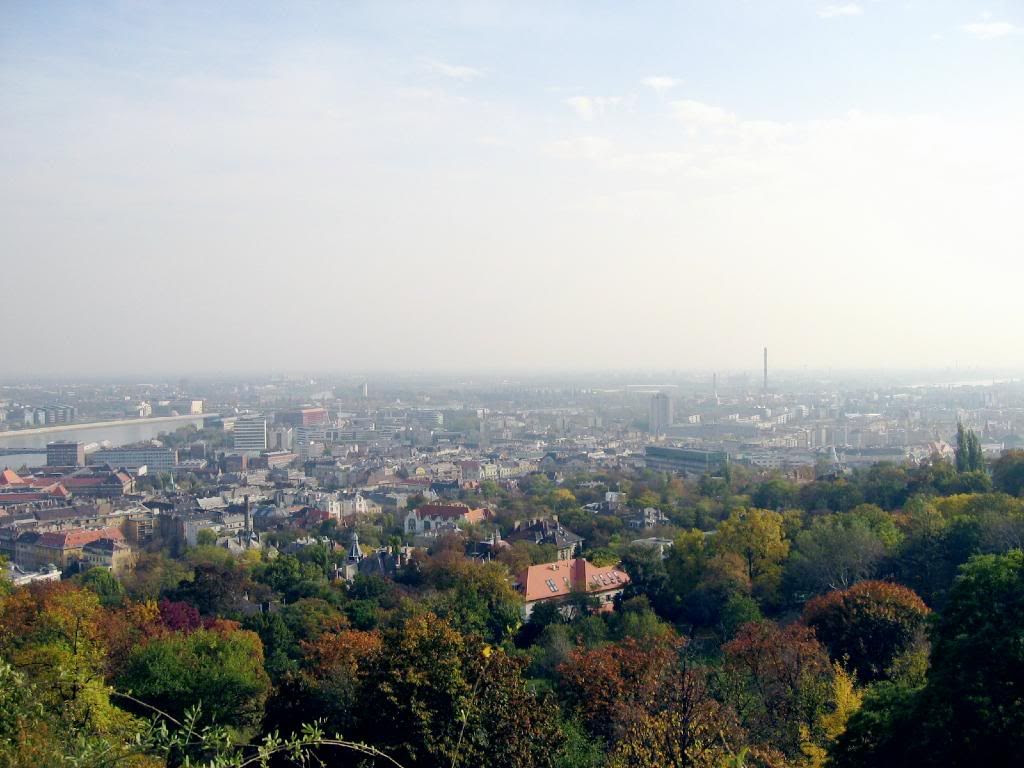 The next part of our tour involved crossing the Danube via the Liberty Bridge (under construction) and walking up to the top of Buda. If you’ve ever walked around Quebec City, Montreal, Seattle, or San Francisco, you understand the difficulty of walking uphill for more than a block or two. It took us an hour to get to the top, and let me tell you, we panted and gasped along the way. It was worth it of course, as you could see the Danube and Pest in all of their glory from a fantastic angle. 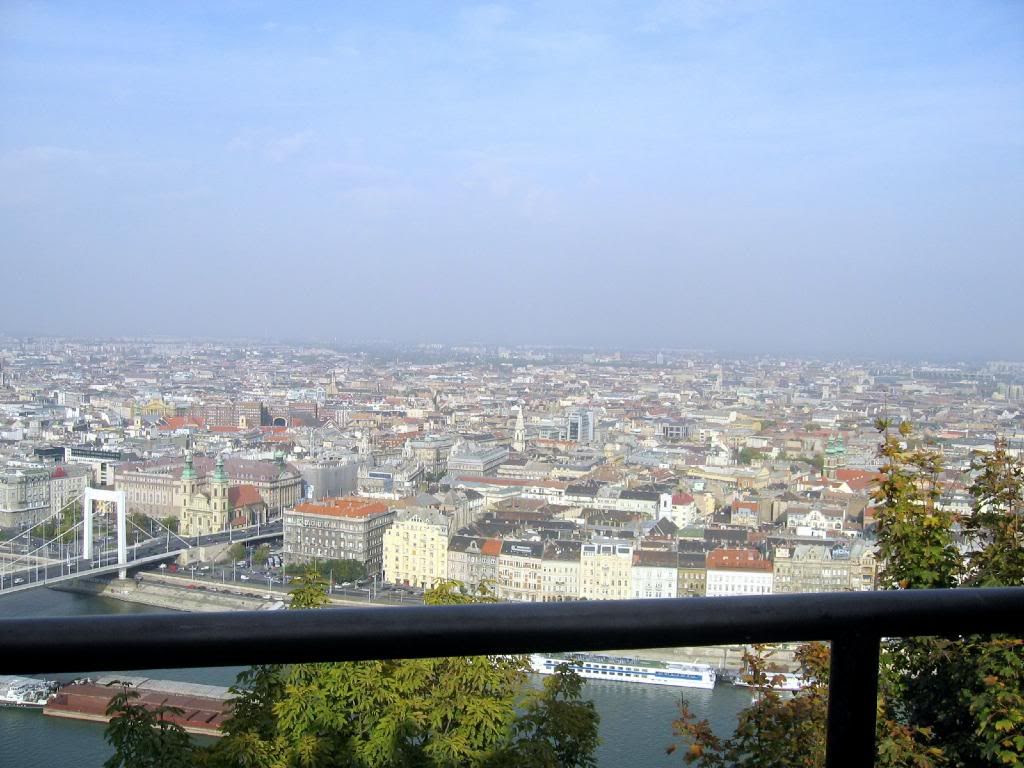 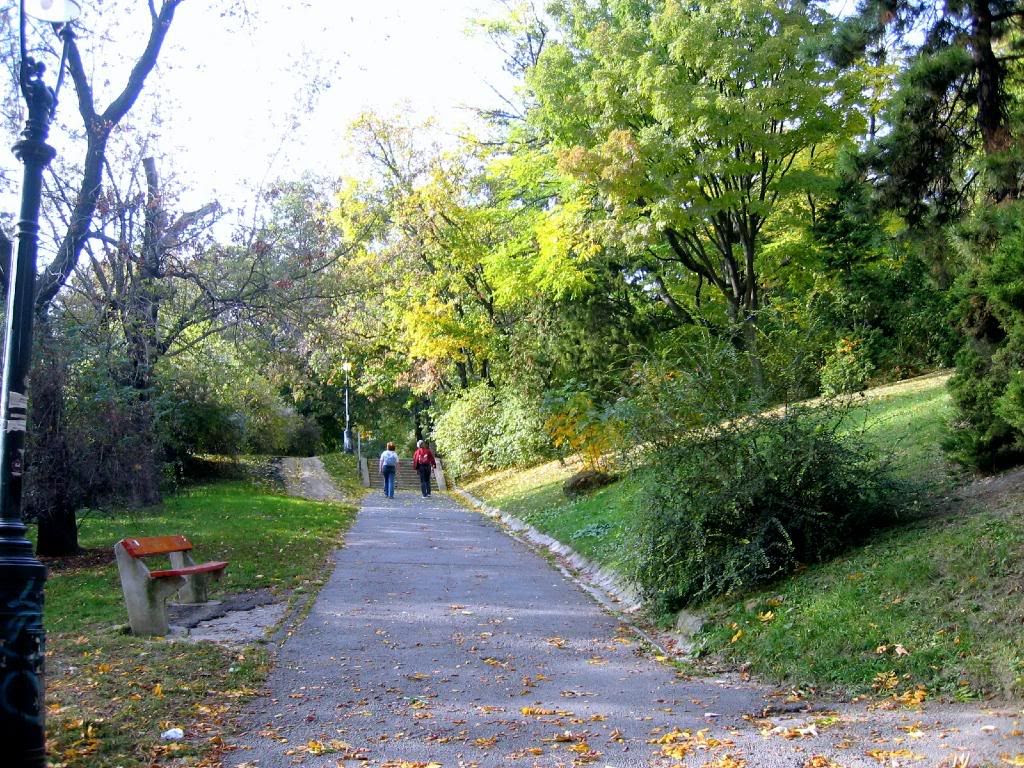 The descent was obviously much easier and we crossed the Liberty bridge to get back to the hotel. We passed the first street in Pest and Andras commented “There is the big food market. It’s quite nice.” I tugged on Eric's arm like a child does to a parent when she walks by a toy store. “Oooooh – I wanna wanna wanna! Please, please please…we went to the music store already!” Eric rolled his eyes, “Ok but you hafta buy me a water.” Hehe, there was no water near the entrance or the whole outer circumference of the large bazaar. But there were spices, chiles, condiments, fresh produce, cheeses, meats and wine! Oh, darn. I decided that I had to have some Hungarian Paprika, and it took 10 minutes of deliberating between sweet or hot, powdered, tubed paste, or jarred, Eric groaned. I was girly and picked out the one that looked the cutest – a little tin with a funny picture on it. A useful souvenir!

By the time we got back to the hotel we starving from all of the walking and climbing so we discussed our dinner options with Andras. He had mentioned a few days before that there are some great Indian restaurants nearby and without hesitation we agreed that we should go to whichever one Andras recommended the most. Adrian was conveniently in the lobby giving an interview so we informed him that we’d be leaving soon for dinner. “Great! I haven’t eaten all day!” Our plans were set.
We chose the more authentic, less western-style eatery. Andras said that he brought all of the Indian musicians to our choice when they came to perform at Trafo. Perfect. We rode the free tram for a couple blocks down the main street (is Socialism really evil?), hopped off, backtracked a little bit, and turned a corner into an alley. We took a couple more steps and lowered ourselves down the narrow stairs into the restaurant – a hidden gem indeed. We sat down at the white linen table, and the smiling wait staff promptly brought us a free round of Mango Lassis. I knew we were in for a treat. We started with mixed vegetable pakora – onions, cauliflower, potato, and pepper battered and fried, served with a sour, piquant but cool tamarind yogurt sauce. They were so good we ordered another round. While we devoured the second batch, Andras’s girfriend, Olga arrived and joined us.
Before we knew it, dinner arrived. Eric and Adrian predictably ordered Baigan Bhartha and Chicken Curry, respectively. Andras and Olga split a Paneer in rich tomato cream gravy (I'm blanking on the name), and I got a simple vegetable curry. These dishes didn’t come with rice (waste of calories), so we got plain and garlic naan (totally worth every buttery calorie). The flavors were spot on – but that was to be expected, as the mystique of Indian cooking lies in its spice blends. Of course a country known for its seasonings would produce this amazing ethnic food. They also have a different gauge of heat – I ordered my curry medium, and it was nicely seasoned, but not so hot that I couldn’t taste the sweetness of the fresh peas, cauliflower, onion, and zucchini. Eric requested his eggplant to be mild – he almost cried when he took his first bite. What a wimp, I thought, and dug my spoon right into his metal bowl. Serves me right, I almost burned my mouth off – it was hot, all right – temperature wise. “It’s not that bad,” I gargled, blowing cumin-y steam out of my mouth. “You just wait...” he warned. As the puree slid down my throat, I realized, YOWW! He ‘s right! I think smoke came out of my ears and I know a high-pitched ring resounded in my temples. I was definitely a little teapot, not short, but a littler stouter after that meal – I had to smother the flames with naan. Eric sent it back, and it returned shortly, but only slightly milder than the first attempt. Luckily he was full enough from the pakora and some of my curry, so he didn’t have to send it away again. 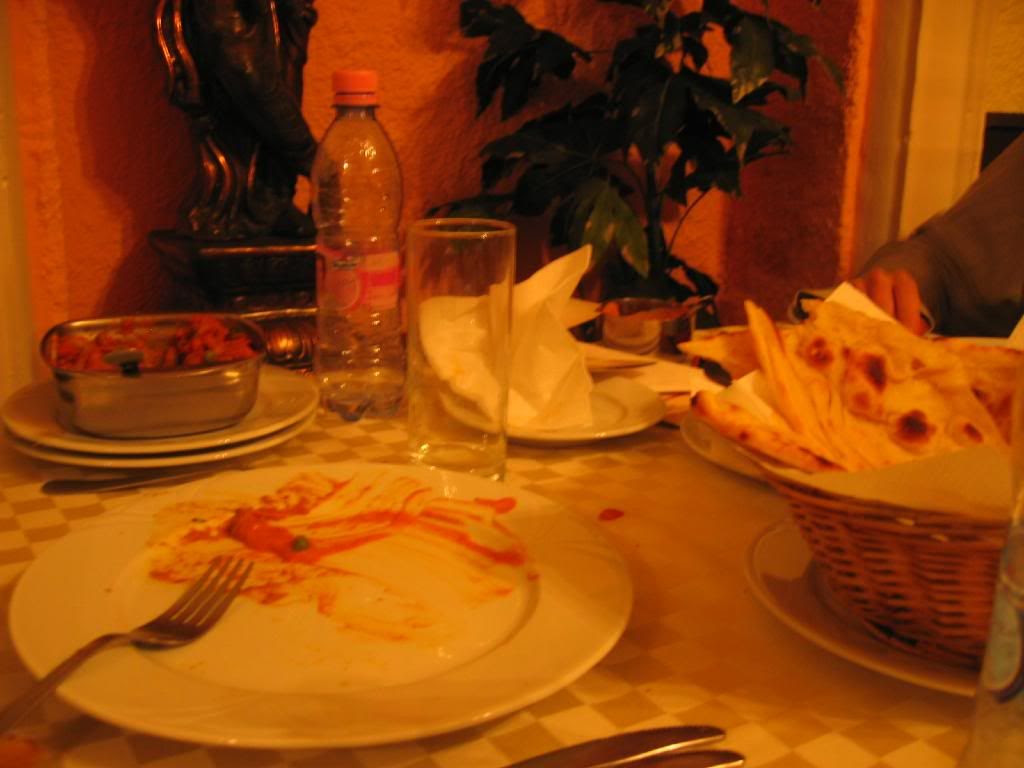 We decided to walk back to the hotel to work off a bit of the ghee-licious meal and Olga took us on a bit of a detour to show us the Frank Zappa bar. Apparently it used to be a really cool rock club… now it’s a pub whose walls are covered with murals and memorabilia of the late composer. Despite this, the atmosphere was totally off-putting – euro-pop music… really? Adrian was excited for one painting though, because it featured the Hendrix Strat, a guitar that he used to play on stage. The customers gave us weird looks, and feeling uncomfortable anyway, we left and completed our trek back. We said goodbye to our new friends, and I’m confident that I’ll keep in touch with them (Especially because Olga runs one of the top-rated hostels in all of Europe… in case I ever get around to doing that backpacking trip, she could be a very helpful source).
Posted by Julie at 2:11 PM

Glad to hear you enjoyed your time in Budapest. Alas, I couldn't make it to the gig as I now live in London (I've heard rave reviews from friends who attended).
Just one remark though: free tram? Socialism? Don't think we have those around in Hungary anymore...

Hope I'll catch the ABPT next time around!