Oy... as I write this, I am sitting on a bed in a hotel in Kentucky, wounded. Such things like falling up stairs tend to happen before I have my coffee... I figured that finishing my blog post would take my mind off of the seething pain in my ankle and knee. It's as if the universe is reminding me that there is still such a thing as complete equilibrium, and therefore karmic balance. You'll see what I mean below.

Anyway (lalalalala), the story opens in Boston... upon leaving town, I visited my first ever Cracker Barrell (shocking, I know). 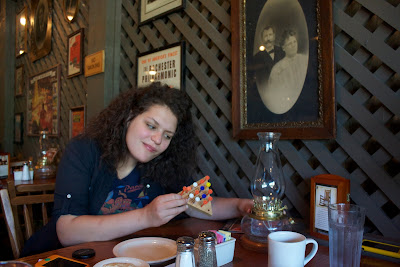 The experience was as mediocre as I expected, complete with undercooked hash browns and forgotten hot sauce. Still, I doubt that this will be my only visit to such a fine establishment. There are lesser evils out there in the U.S., such as Denny's and Waffle House, but hunger knows no boundaries. Oh, how I long for European breakfasts and rest stops...

We traveled onward to the great Gotham City, where we would play 2 nights at Les Paul's stomping ground, a teeny joint called the Iridium. We managed yet again to pack ourselves onto the stage, and the concert exuded joy from the reciprocal positive energy between the audience and the band. 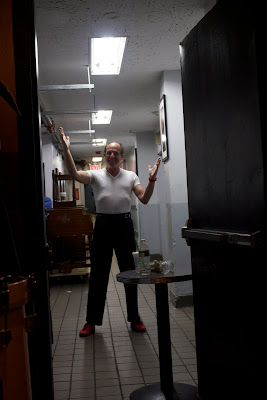 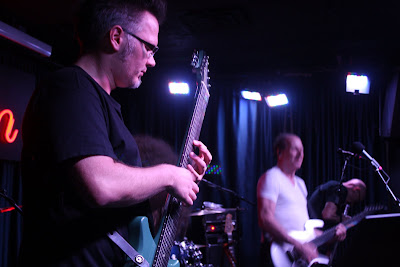 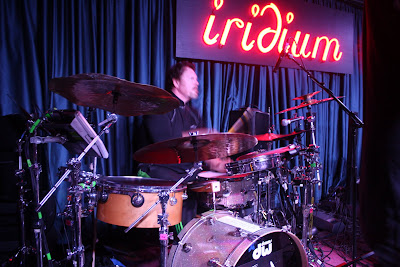 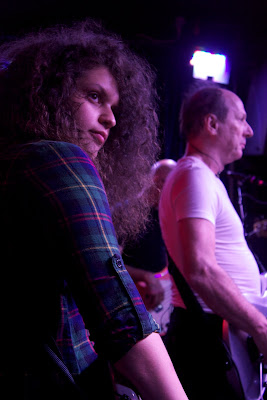 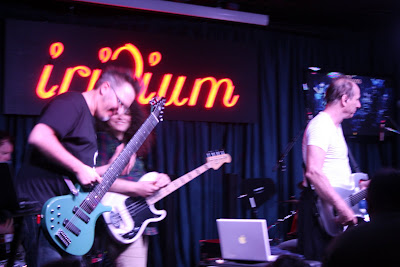 There was also an ample air of whimsy that night, because it was Tobias' night to play in his hometown, and it was his birthday the day before. I had mentioned to Ade that we should try and recreate the scene from the Mexican restaurant on stage, but we didn't have time to do get the necessary supplies in Boston. I pretty much forgot about it, but Adrian was set on completing the mission, and set it into motion just before Stick Men took the stage.

See Tony's road diary to see the shots of the pie-ing that took place just before "e." I only managed to snap some after our set. 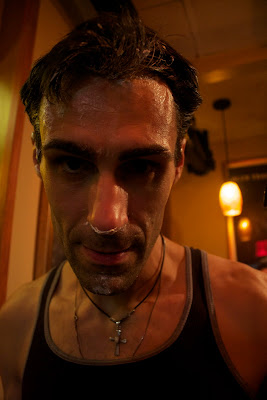 So that's why I think I fell up the stairs... well, I also admit that I am a total klutz. Adrian managed to get a spider bite the next day... so there's your proof that no deed goes unpunished. 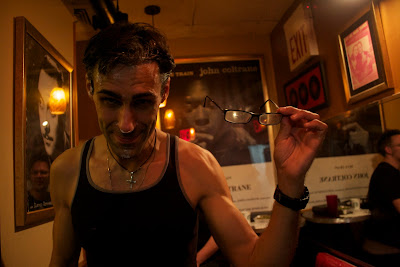 Another great addition to the evening was that Eric came up with my Mom to see the show. It was just so great to hang out as a group again. The two drummers even battled head-to-head in an Arnold Schwarzenegger imitation showdown. 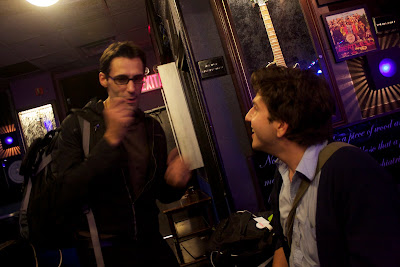 The next day, I ran into Ade at the elevator, and we decided to grab some lunch. We walked around for a while until we settled on a little French place a few blocks from our Upper West Side hotel.

The menu warned that the food would take a while, but it was okay, since we were fortunate enough to be able to leave our gear set up and were forgoing soundcheck. Thirty minutes went by, and our tummies were really starting to rumble. Adrian kept looking up anxiously at the counter to see if our food was ever going to arrive. Suddenly he realized someone familiar had just walked through the door. "Oh my gosh!" he exclaimed, "There's Matt Damon!" I glanced up shyly and saw a guy wearing a cap. I didn't want to stare so I quickly shot my eyes back to my dining buddy. "Are you sure it's him?" Adrian stared unabashedly, "Oh yeah, that's him alright."

Our server then briskly walked over (without food - wanh!) and asked us if we minded moving to the now unoccupied table to our right, so they could make room for a larger party. I looked across the table wide-eyed - holy moly, I thought, "He's going to seat Matt and his family next to us!"

And sure enough, he did. Our food finally arrived (mmm... open face omelet with roasted sweet potato home fries), and I had to quietly scold Ade to stop ogling. "But he's my favorite actor. I just can't help myself!" On our way out, he worked up the nerve to say something. "Hey Matt, I just wanted to say that you're my favorite." The actor looked up from under his brim and smiled that famous pearly grin, "Thanks, man. I really appreciate that." Being ever respectful, I didn't get a shot of them together until we hit up a rest stop a few days later... 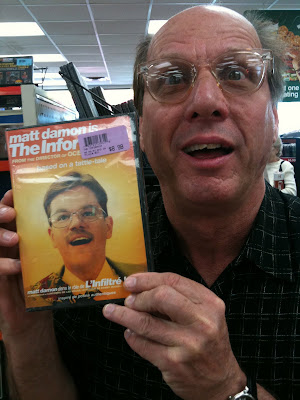 That night we played another great one, and my good friend Tim Motzer even drove up from Philly to catch the show again.

***We interupt this broadcast for a public service announcement - do check out the 2 hour concert Eric and I did with Tim back in August. It is pretty darn essential!*** 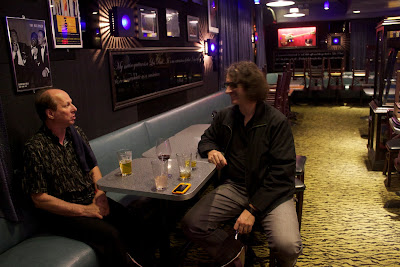 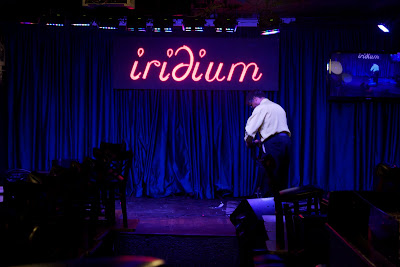 The next day we made the über long track to Fairfield, Conn. With all of the extra time, Tobias and I decided to walk the mile to the venue for little exercise. Halfway along the way, we found a way to put those calories right back in (and practice our kid smiles). 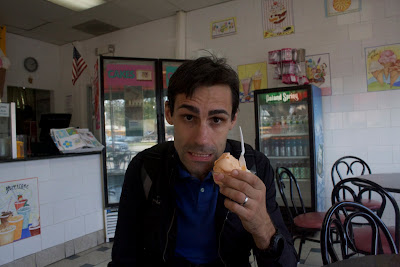 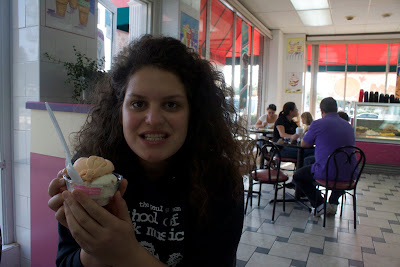 I joked with Tobias that he better watch out... 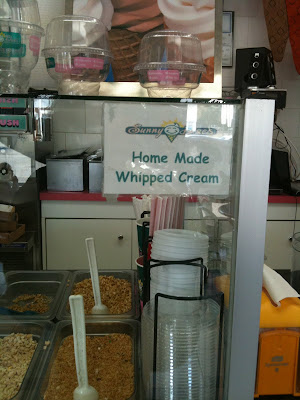 How can reading a blog post make me that hungry? I too have fallen "up" the stairs. It involved a sudden loss of gravity due to someone named "Jack Daniels".
Thanks for the postings and I hope to see you back on Vancouver Island sometime in the future!
Cheers
Swine