Trying to get up to date... here's a little something I did backstage in Fairfield: 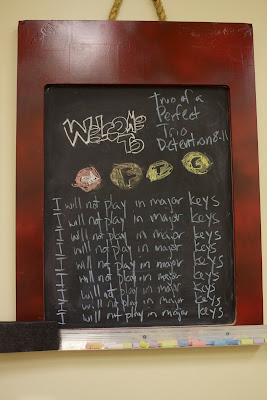 The East Coast (and therefore lovely short drive) portion of our tour continued to Northampton, Massachusetts, where we feared we wouldn't be able to fit on the Iron Horse's microscopic stage. 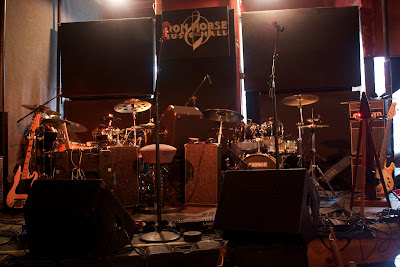 Whew, we did it! I celebrated by talking a walk around the block: 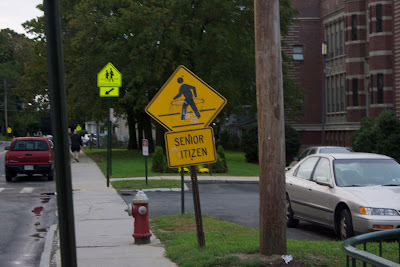 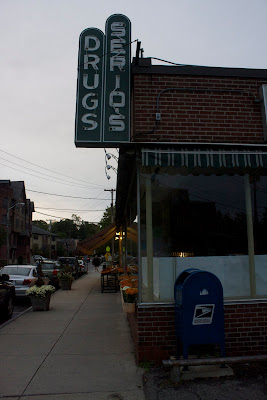 And then I returned to the dressing room to catch the rumbling thunder below the stage as Stickmen played. 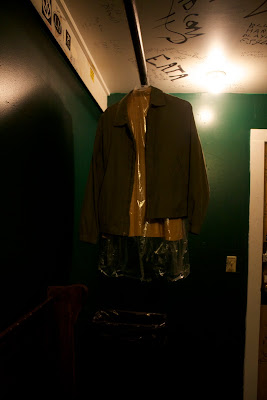 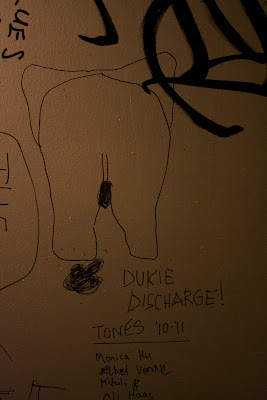 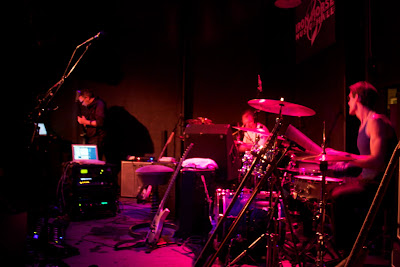 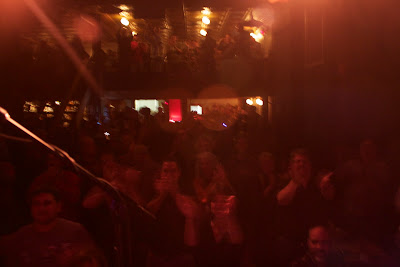 The next day we drove up to Montreal, and stopped at a really nice little place called the Putney Diner in Vermont - definitely was the best breakfast of the tour! 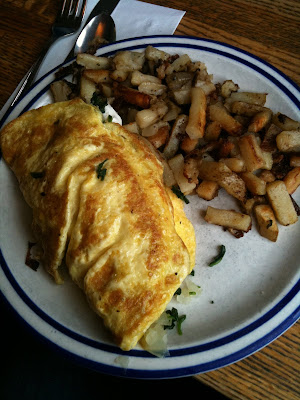 And then there was soundcheck and backstage hang: 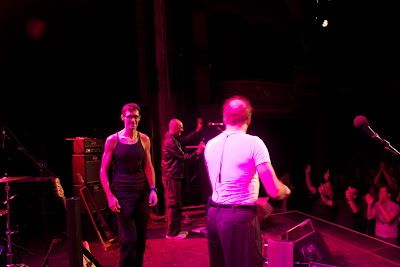 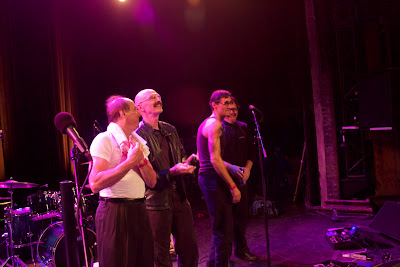 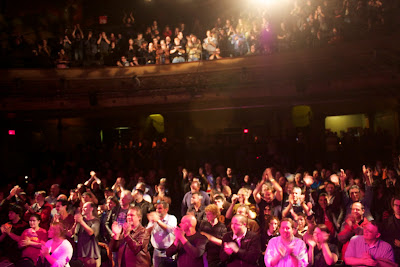 Afterwards it was rather difficult to navigate the uniquely... um... cozy parking lot: 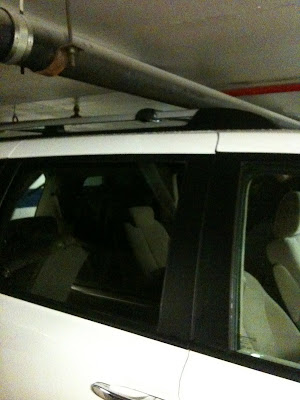 But we made it, and the next day I found a neat (also cozy) greasy spoon called "Cosmos." The inch of oil on the TV set said it all. 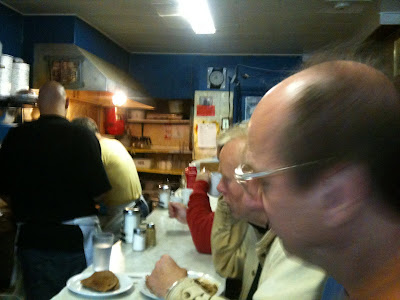 I definitely skipped lunch that day: 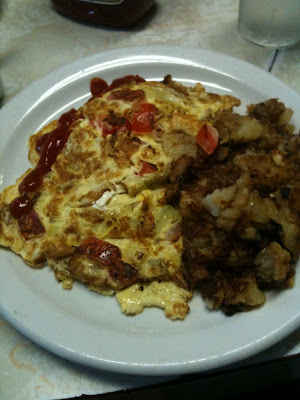 We were totally stuffed on the drive to Toronto, and holy cow... we had an actual night off! I found an Indian place near our hotel, since we can't eat heavy curries before going on stage... well, I make an exception for Maharaja in Milwaukee, it's too darn good to pass up when we're in town. The shows at Shank Hall are always riddled with masala burps (unbeknownst to the unassuming audience members, of course... well, I hope).


Anyway, the food at The Host was very unique and tasty - I just couldn't get over how light it all was. The vegetables weren't over-cooked to unrecognizable mush and enrobed with ghee and cream (which, don't get me wrong, still makes for tasty eats).  I could've actually eaten at this place on a show day! 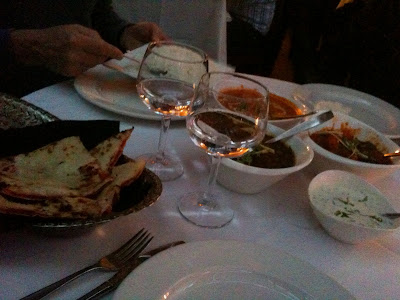 When I got back to the room I thought I'd pass out right away (at 8PM - egad!). Yeah right... I stayed up and played variations of Scrabble until 1 in the morning... oops!

The next day, I woke up and trekked to the Apple Store downtown to replace my computer's power supply, which stopped working in New York.  Not a good thing to have happen on the road... luckily, it was a gorgeous day (finally one without rain!).

I got back to the hotel and met with Tobias so we could head over to the Mod Club early, my heart set on making some soup for dinner. 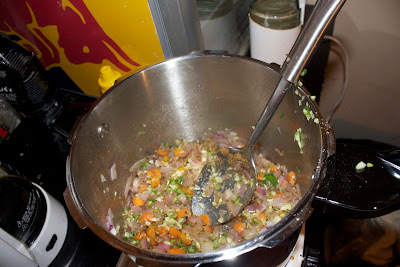 Forgive me, it's been over a week so I don't remember the recipe exactly... I know it had red onions, carrots, garlic, ginger, collards, broccoli, cauliflower, tomato, cilantro, cumin, hot smoked paprika... it was darn good. 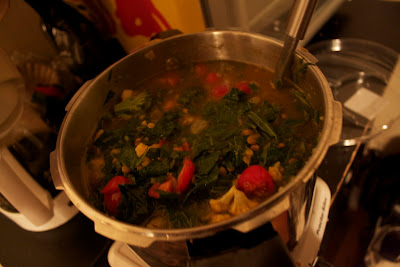 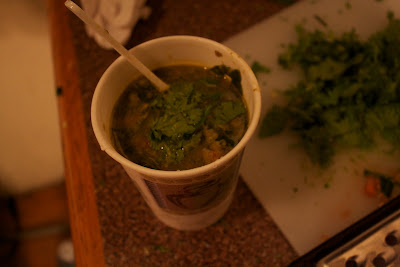 The cool thing about the Mod Club is that you can spy on the stage from the dressing room: 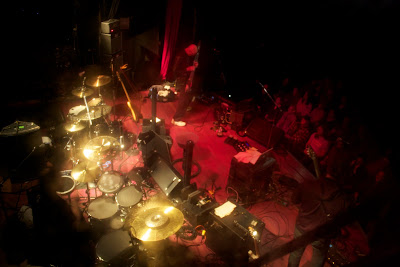 Or from the side of the stage: 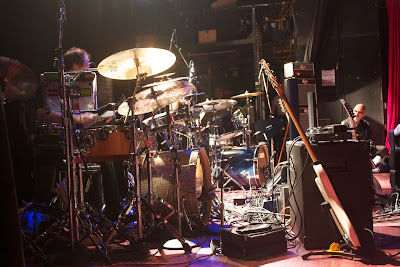 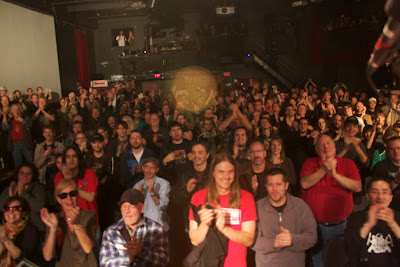 The next morning we returned to a spot we found on our 2009 tour, Aunties and Uncles. I have to admit we also like dining there because the server we've always had there is a Prog Rock DJ.  He keeps missing our shows, though! 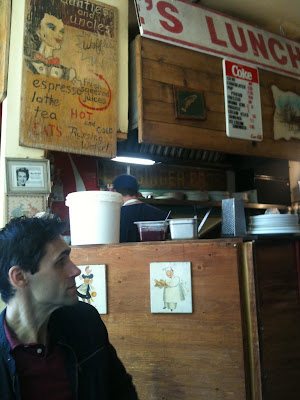 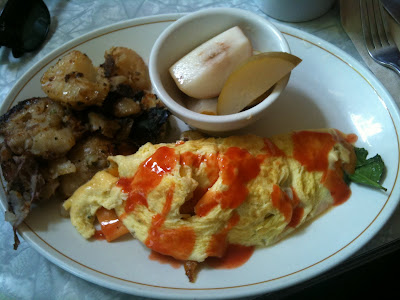 Chris Scanlon & The Other Guys said...

Julie - just another thank you for the excellent show in Northampton, MA a couple of weeks back. As a bassist I was really impressed with and inspired by your playing. Been a fan of Adrian and Tony's for a long time and was happily blown away by their bands. It was an inspiring night and I've been enjoying your solo CD since. I mentioned the show to an old friend of mine who I played in bands with in high school and college, and he says you've sat in with his Talking Heads cover band! Small world...anyway, safe travels and thanks.

Tis true - thanks for the kind words!

So happy to read you like Aunties and Uncles, one of my absolutely favorite places to go when I happen to be around in Toronto. The place is always busy but it's still so lovely. I've never eaten that much delicious banana oatmeal pancakes before. This restaurant is definitely worth to be listed as one of the best breakfast places in Toronto...Laughing because of the remark about their prog rock staff!